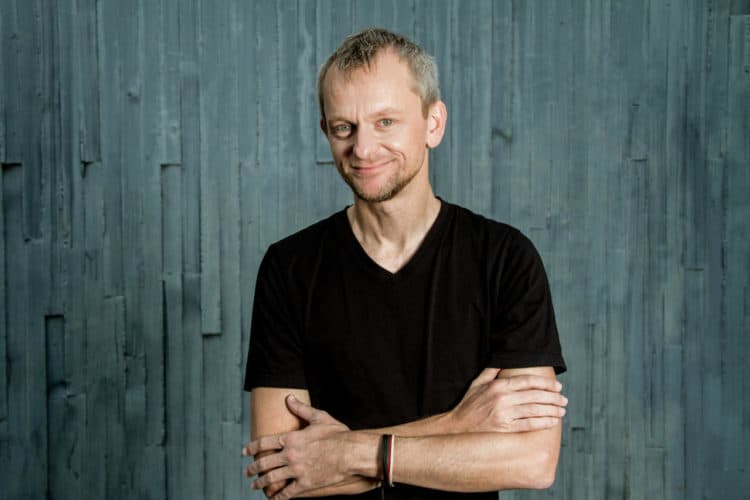 Composer Patrick Kirst has scored everything from Netflix’s The Kissing Booth to Lionsgate’s Inherit the Viper. His next film is the horror/thriller Breaking Surface, which is getting released by Music Box Films December 15th. A short description of the film: A winter diving trip in Norway turns into a desperate race against time for two sisters when one of them becomes trapped at the bottom of the ocean by falling rocks. To learn more about Patrick’s work on Breaking Surface and his other projects, we conducted the below Q & A with him. Patrick’s Breaking Surface score is now available here.

-You have worked with Breaking Surface director, Joachim Hedén on two other projects before this film. How was your working relationship different on Breaking Surface than your first film together?

In general, Joachim likes to react to what I have to offer. He trusts me and my musical instincts and that is a great, liberating feeling. Breaking Surface was no exception. I came in very late in the process and therefore I had to trust my instincts. We didn’t talk too much about the film, not only because of time constraints, but also because these talks could also be pushing me too hard into one direction. I like to follow my instinct but also like to challenge myself on every project. What was very different on Breaking Surface was our collaboration. For the first time, we worked remotely together – in real-time. I was sitting in LA, and he was in his studio in Malmö. We tried out many different ideas and made most if not all revisions on the spot. It felt as if he was sitting right next to me. Technology when it works! …

-You have said that you were stunned by the photography the first time you saw Breaking Surface. Can you elaborate on why it stood out so much to you?

The photography was a combination of the stunning images of the majestic and somewhat intimidating Norwegian mountains and all the underwater shots. The two cinematographers (Eric Börjeson and Anna Patarakina) captured the mountain backdrop perfectly and made it feel somewhat threatening. And the underwater images were so dark and felt so real. I felt up-close to the characters and their struggle for survival. It was such a visceral experience. I was constantly sitting at the edge of my seat, without even understanding one word of dialogue. The images told the entire story.

–Breaking Surface is your first genre film. What did your preparation look like for this?

I was thrown in at the deep end as mentioned before. But on higher concept movies like this one I always work on some concepts. I knew I needed a theme for the two sisters. Finding the emotional core is really important to me. Since Joachim responds well to the cello, I thought that it would be best to write the theme for two celli embodying the relationship between the two sisters. It is not the most harmonious relationship, so I wanted to keep it a bit cold and unresolved. The action bits needed some synth preparation to find the right pulsing energy. And from there it is just like a big puzzle game and putting all the pieces together!

–Breaking Surface is a Swedish film. Does that region have any signature sounds that you incorporated into the film?

I feel that I was a bit influenced by the Nordic sound by Icelandic composer Jóhann Jóhannsson and Estonian composer Arvo Pärt. Their writing embodies this beautiful loneliness that I very much respond to. Especially Pärt’s use of silence and his minimal, poignant string sound were a true inspiration.

-What are the main differences in scoring a film like this, as opposed to The Kissing Booth?

Ha. EVERYTHING! Really, everything is different. The Kissing Booth is a dialogue heavy romantic comedy vs. the epic cinematographic high concept survival drama experience! You probably couldn’t get two more opposite scores to write. And that’s what I LOVE about this job. On The Kissing Booth, every minute detail in a scene is important and in most cases needs to be acknowledged. Each note, each musical gesture, each timbre is meticulously chosen and finessed to make sure it nails the story in any given moment. This is quite important since comedies are more up-close and dialogue-heavy than epic larger-than-life movies.

-In a previous interview you said you recorded a big low-brass section and then filtered the brass to make it sound as if they were playing underwater. Is there a scene in the film where this sound is more prominent? Where would you tell viewers to listen for this?

It can be heard throughout the score, but probably most prominently in the “Hunt for Oxygen” scene. [SPOILER ALERT] That’s the scene where Ida dropped one of her oxygen tanks, and she must now do a free dive to search for it and bring it back to her sister. The brass was filtered to give it a scary sound. I also ran the brass through a special plugin [for the music nerds: an IR reverb that I was feeding a reversed taiko drum sound], to give the brass a gasping-for-air quality. I really enjoyed experimenting with that.

I honestly didn’t have the slightest clue. When I first watched a rough assembly of the film – with a 2.5 hour running time – I couldn’t even see its potential. But then, when editor extraordinaire Paul Millspaugh started carving out the story and making it crisp and focused, I was hooked. I knew then that it would be a success, but never ever did I expect this kind of blockbuster hit. It was the most re-watched movie of 2018 and The Kissing Booth 2 was watched by 66 million viewers in just the first four weeks of its release. We won the People’s Choice Awards in both the “Comedy Movie of the Year” and “Comedy Movie Star of the Year” categories. It is really a crazy Hollywood story!

-How was your approach different with the 2nd film?

The sequel obviously had to be in the same sonic world as the original. We created a modern retro comedy score with a lot of nostalgia, but I also wrote a lot of quirky, fun pop-rock influenced guitar and drum grooves. So, I needed to continue in that vein to stay on brand, but also develop the themes further. The characters are maturing and coming of age. There needed to be true and earned emotion. The sequel is emotionally deeper than the original, so we decided to record a chamber string orchestra to make these important key moments in the movie as heartfelt and meaningful as they could be.

-What European influences or techniques do you still incorporate into your American scores today?

That’s a great question. I definitely adapted my European style to the sound of American movies. Having lived in the States for two decades, I am now a Euro-American blend between these two distinct worlds. But I will always write with my European sensibilities when it comes to drama. That mostly shows in how I write for strings. I like to give the strings a lot of color, inspired by French composers like Ravel or Debussy. And I like to work with sound and timbre and the strings are the perfect emotional backbone for most of my movie scores.