Home
Movies
A Tintin Live-Action Movie is in Development 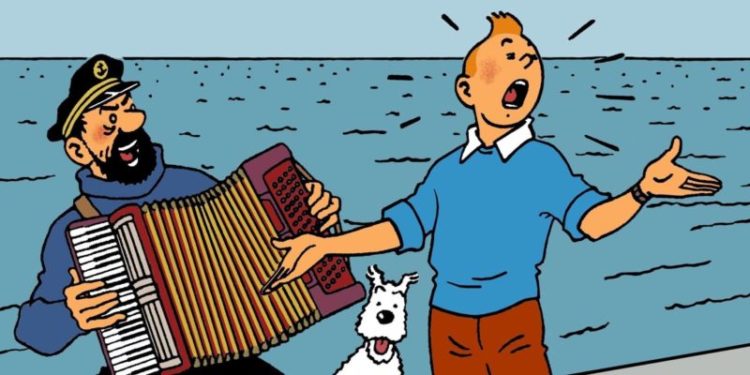 Tintin is definitely one of the many shows that people really have to be interested in to understand and get into, but the great thing is that the idea does have a very big following between kids and adults since not only is the explorer a longstanding figure within the field of pop culture, but he’s been revived throughout the years for people to enjoy as well. There’s no doubt that just looking at him that Tintin is from a different era, but he’s been embraced all the same since the animated movie made by Steven Spielberg turned in a nice profit a while back, and it’s likely that there might be a sequel to the story as well. The live-action version that’s said to be in the works isn’t going to interfere with a said sequel if it happens though, at least not so far as people have been informed. At this time it’s not for certain when the movie will be headed down the pipeline, but it’s bound to happen at some point and could come even quicker once the pandemic is seen to be behind us. When that day is bound to come isn’t currently known, but a lot of people are hoping for the best so that the entertainment industry can get back to life as usual.

There’s something fairly magical about stories that come from the early 20th century since many of them have survived this long and several are still seen to thrive in the modern era. A lot of it possibly has to do with the fact that the storytelling has changed and even improved over the years, and another part is the fact that the effects have improved to such a degree that seeing everything that’s taking place as the director is trying to convey is quite easy. That’s why stories such as Tintin are able to keep going since the ability to figure out a way to tell the story in so many ways is a boon to the continued survival of such stories that might have died out otherwise if not for those that remember them from their younger years. One has to remember that many people still cling to their memories of the older shows and movies that they grew up with, as many of us do, and that bringing them into the mainstream in a big way isn’t exactly bringing new ideas to bear, but instead is allowing those old ideas to be presented in a different manner.

Many shows and movies that have to do with adventure manage to capture the imagination in a very real way that keeps people coming back for more since many folks tend to think of this as a little more realistic even if it’s still a bit of fantasy that can easily be enjoyed and debunked later on. It’s the idea that it takes place in the real world, more or less, and is easier to relate to in some regards, that keeps a lot of people happy when watching the material, which is easy to understand. There’s no alien or supernatural world to understand or read up on more often than not since Tintin is usually far more grounded than many stories and offers up a very practical adventure-type story that people can get into without having to wonder what kind of twist is going to come that they won’t fully understand. Plus, it’s just a fun story that a lot of people have been enjoying for decades, and a live-action story might actually allow people to relate to it even better since it will be performed on a level that people can really connect with and therefore be even better received in a way. It might not amount to as much as the animated version but we’ll have to wait and see on that score since the reality is that sometimes animation can outperform live-action and vice versa, depending on how the story is told and how well it’s received by the audience.

So far Tintin’s track record is quite impressive since being kept around for this long is enough to think that the story is worthwhile enough to be considered as something that should be successful no matter how it’s shown. When it will reach production though is hard to pin down thanks to the continuing pandemic that has managed to stall a lot of projects and will do so until a way is found to get around the issue. But at this point, it’s enough for a lot of fans to learn that there is a movie coming and that it will be focusing upon another adventure of Tintin’s that they may or may not know about depending on well-versed they are on the character and his many capers.