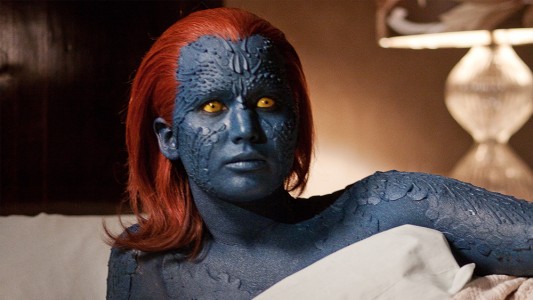 Makeup and costumes help bring out the characters in movies to life. But elaborate creature makeup for long hours in a day and wearing bulky superhero suits takes a heavy toll on the actors. When we shower the actors with praise for the work put in a film, we forget that the stars rely on body transformations to embody the character they want to play. As it always goes in popular culture, the more extreme the makeup transformations, the more the critics and other people seem to notice. Today, computer-generated images and makeup techniques come together in creations like the snake-like face of Lord Voldemort in “Harry Potter and the Goblet of Fire” (2005). For the look, actor Ralph Fiennes’s face had makeup applied to it the usual way, and then computer wizardry altered his nose and flattened his face. Well, here are some of the celebrities who hated every bit of the makeup they had to do for their roles:

In her role in X-Men films as the blue-skinned space shifter, Jennifer Lawrence explained that wrapping her body in prosthetics and painting took at least 6 hours. Using the bathroom for Jennifer was such a chore. She had to stand and use a funnel while answering the call of nature. Due to the funnel’s imperfection in the job, the costume acquired some “distinct smell.”

The Hound is one of the most unforgettable characters in Game of Thrones. The hard-edged favorite to the fans, Rory McCann, had his face covered with terrible burn scars. Half of his beard had to be shaven during the movie filming. And Rory did not enjoy wearing them every single day. He was quoted saying, “And then you go back home, and people go… “Well, you look funny big man.”

The Lord of the Rings is among the most memorable epic fantasies of our time. Creating it was not as magical to the actors. For Orlando Bloom to play a sharpshooting elf Legolas, he had to put on blue contact lenses(his eyes are brown-colored). The contacts so badly damaged Orlando’s eyes; he could only wear them for a short period. Similarly, actor John Rhys-Davies’ face mask brought him irritation. It was so immense, such that he threw it into the fire when they were done filming.

In science fiction, Chewbacca is one of the most endearing characters. Peter avoided water during the trash compactor scene. But his costume, made of mohair and natural yak, was always stinking when it got wet. And that was all the time! He knew his costume would smell awful. Also, his mask would regularly loosen from his face because the outfit always got so hot.

Of all the costumes the avengers had to wear, you might think Scarlett Johansson’s costume was the easiest to wear. On the contrary, the suit was restrictive and so hot that Scarlett hallucinated after filming a long fighting scene.

Eddy had to wear an entire body cast created by Rick Baker. It was a hand-carved spandex and eurothane foam suit that would make it appear to be 450 pounds. They also filled the suit’s other parts with water and cellulose to make it seem believable. It took Eddy Murphy three hours each day of the shoot for the whole 70 days shoot.

Arnold Schwarzenegger worked hard for it, and he has the reputation of playing the corniest Batman villain. As Mr. Freeze in Batman and Robin, the gigantic armor suit he wore took six hours, and a team of eleven people puts it on. And the blue glow around his mouth had him fitted with LED lights to achieve the effects. The problem was, there was battery acid leaking from the lights to his teeth.

Ralph Fiennes brought the evil Voldermort to bone-chilling life in the Harry Potter films in an unforgettable performance. Ralph wore latex coverings on his brows, fake teeth, and wore white makeup. He had his nose altered with digital effects. Ralph became so tired with the process that he would turn down a movie role if it required him to put on special makeup.

Though it is not an experience he cares to repeat, Michael Jai White wore a (CGI) cape in Spawn. Michael reiterated that there had never been any footage of him saying that he thought Spawn was a good movie or he liked it. So, why did he hate it so much? Well, for starters, in the Spawn movie, it took 2-4 hours to glue the costume to his body. He also had to put on a face mask which restricted his breathing ability. He also had to wear yellow contact lenses, which in turn hurt his eyes.

For the comedy Shallow Hal, Gwyneth Paltrow had to wear a 25-pound suit. The movie was about seeing the inner beauty in people and looking beyond their physical appearance. She thought it would be an incredible experience until she noticed no one even looked at her. Gwyneth said it was extremely lonely, sad, and incredibly isolating. Her wig and facial prosthetics took an additional two hours to wear. Upon removal, each piece would be destroyed by the makeup team because they were filming in the summer heat. She said it was very claustrophobic.

Even though it is hard to say who had the worst costume among the Avengers actors, Paul Bettany would have to rank high on the list. For ten hours a day, to play android Vision, Paul Bettany had to don a skin-tight rubber mask to cover his whole body. Applying his makeup took three hours, which had him endure constant squeezing of his head. The mask only left a tiny portion of his entire face open to the air, and it made it difficult for him to hear. “By the fourth and fifth day… you have to concentrate on how lucky you are,” Paul Bettany later said.