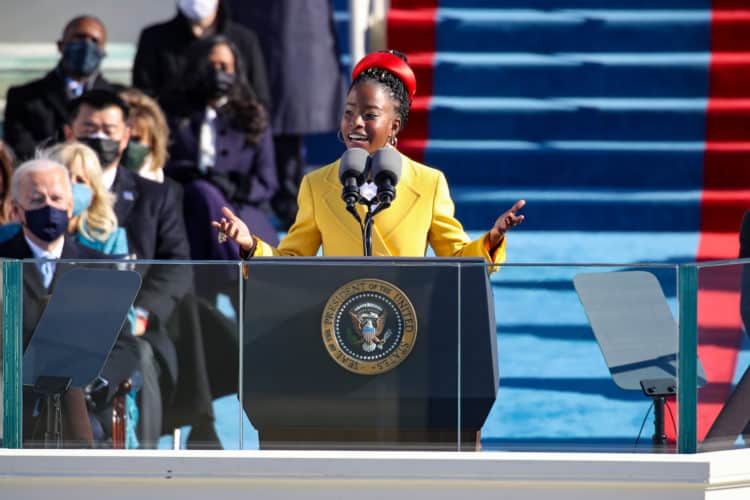 The 2021 presidential inauguration has been the most highly anticipated in recent history. Although the swearing in of president Joe Biden was the main event, 22-year-old poet Amanda Gorman ended up stealing the show. During the ceremony, she read an original poem “The Hill We Climb” and she captured the hearts of people all across the country. Even some people outside of the United States commented on the beauty of her work. Many felt like the poem provided hope for a bright future under a new administration, and her words echoed throughout the crowd. Now there are millions of people who are excited to learn more about her. Keep reading for 10 things you didn’t know about Amanda Gorman.

2. She Is The Youngest Poet To Read At A Presidential Inauguration

Gabrielle’s inclusion in the inauguration was ground breaking for multiple reasons. Not only is she a black woman, but at just 22-years-old, she is the youngest poet to ever read an an inauguration. Many people feel that her presence marks a new and more positive direction for the country.

3. She Is An Activist

When most people think of Amanda, they are quick to categorize her as a poet. In reality though, she is other things as well; one of them being an activist. She is very passionate about the things she believes in and has always made it a point to use her platform to raise awareness and bring change. Now that there are more eyes on her than ever before, there’s no doubt that she’s going to use this momentum to for the greater good.

4. The Inauguration Isn’t The First Time A President Invited Her To Read Her Work

Reading her poem at the 2020 presidential inauguration isn’t the first time Amanda has been in presidential company. During the Obama administration she was invited to the White House to read her work for well-known figures such as Lin-Manuel Miranda, Hillary Clinton, and Malala Yousafzai.

5. She Wrote A Children’s Book

Even though she’s still in her early 20s, Amanda has been hard at work carving out a very impressive legacy. She wrote a children’s picture book called Change Sings which is set to be released in September of 2021. Images in the book were illustrated by Loren Long. Amanda will also be releasing a collection of poems The Hill We Climb which in September of 2021.

6. She Is The First National Youth Poet Laureate in the United States

Amanda has been writing poetry for almost as long as she’s been alive, and she’s no stranger to receiving attention for her work. In 2017, she became the first person to receive the honor of being the National Youth Poet Laureate in the United States. This title is given to a young person who is a talented poet, dedicated leader, and change maker.

7. She Hopes To Run For President Some Day

As far as we can tell, Amanda hasn’t been involved in politics yet – but she plans on changing that in the future. Amanda Gorman hopes to run for president when she reaches the age of eligibility in 2036. If she were to make it into office, it would certainly be an amazing full circle moment for her.

8. She Struggled With A Speech Impediment As A Child

Growing up, Amanda probably never could have imagined that she’d eventually be reading a poem in front of the entire country. She suffered from a speech impediment that made that made every day conversations more difficult – let along massive public speaking engagements.

10. She Has A Huge Social Media Following

These days, being popular on social media comes with a lot of real life influence and Amanda has officially reached thatinfluencer status. She currently has 1.5 million followers on Instagram. It’s unclear how many of those followers have followed her since the inauguration.