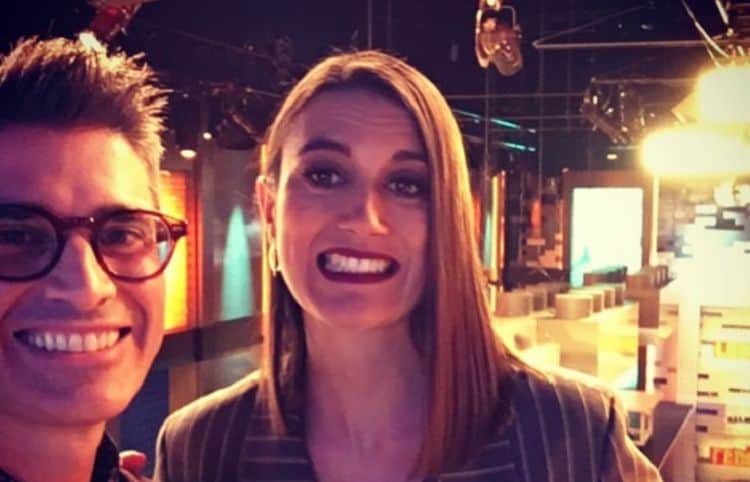 Amy is a 32 year old product designer who hails from Glasgow, Scotland. She’s presently the Senior Design Manager at Lego Corporation, Product Lead at the Lego Group, and currently a judge on the hit TV series, Lego Masters. On the personal side, not much is known about this amazing woman, as she plays her personal life close to the vest. However, we’ve managed to come across a few interesting tidbits for those of you who wish to know more about this well-traveled, talented and fascinating woman. For instance, did you know that her favorite Lego set was Olivia’s House from Lego Friends? To keep up with Amy on social media, you can visit her twitter and Instagram accounts.

1. She Loves to Re-Invent the Old

One thing that Amy truly enjoys doing in her spare time, is to create something smart, intelligent and fun, from something old, worn and discarded. It can truly be said, that she enjoys the process of re-invention. it’s for this reason that Amy visits thrift or charity shops wherever and whenever she can. She does this in order to find something discarded, and turn it into a project. In fact, when she remodeled her flat, she crafted much of the the decorative items this way.

2. She is Active and Enjoys Fitness

Not only does she create craft items in her spare time, but she’s also into keeping herself fit and trim. Activities she enjoys include visiting the gym and working out one day, and stepping outside in the brisk Scottish air to take a bit of a run around the neighborhood. This was surprising, but they have surfing in Scotland, and Amy admits to braving the waters from time to time to surf!

3. One of Her Greatest Passions is to Travel

Amy is well-loved among those she knows and meets. She has this honest, vibrant and kind personality which seems to draw people toward her. For her, meeting new people is a thrill in and of itself. This is especially true when she’s getting a Lego product line together, as she enjoys working with a new team to see what they can accomplish. Her position with the company often means that she must travel and meet new designers, all of which has given her a different perspective on problem solving.

4. Amy is a Songwriter

in 2015, a video called Elevation Worship: Wake Up the Wonder was released. This is a live concert film which centers on the Elevation Worship Experience. According to her very own IMDB page, Amy is listed as an uncredited songwriter, as well as for performing backup vocals! As she is listed on her IMDB page as uncredited, there is no information as to which songs she composed, or what her other duties were..

As a product designer, Amy felt it was time to give back. She took time off in the summer of 2011 to assist their civil engineers construct processing stations, with Engineers Without Borders. This organization holds a vision where they can assist in making the world sustainable by assisting in the efforts to raise the standard of living in low income areas. The processing stations Amy worked on were used to help the village coffee growers process their own crops, by sourcing both materials and labor locally. She found this experience valuable when it came to placing her textbook engineering knowledge of product design to the test by applying it to real world applications.

6. She Was Involved in a 2011 Spiritual Documentary

According to her IMBD page, Amy is listed as being a core team member, and uncredited songwriter for the documentary, This is How We Change the World. This documentary chronicled the lives of 8 families as they struggled to find their spirituality during their times of trials and tribulations.

7. She Volunteered in Botswana

During 2008, Amy spent 3 months assisting an NGO, or non-government organization in the creation and implementation of sustainable projects. For example, one of her endeavors involved assisting the Kalahari Bushman to recognize the value of their crafts, and learn to market them for profit. Amy not only enjoyed her stay as a volunteer, but was able to take the time to visit settlements which were nestled in the depths of the Kalahari.

Buggage is a product which she is currently working on in her off time. As a product designer, she noticed that the market lacked an interactive travel bag for mom’s and kids. Buggage is a travel bag designed with modular storage areas, called pods, to help keep children occupied while their parent is busy, out shopping, or on long road trips. The objective of the design is to keep children, age 2 to 6, entertained while the parents engage in all manner of tasks. Buggage is currently in the development stage, but it sounds like a great idea and we can’t wait to see the end results!

9. Her Most Challenging Theme on Lego Masters

Lego masters is full of brand new themes every show, but some are more challenging to Amy than others. Even though it’s the contestants that do the building, the judges also feel the joys, pains and distress of the contestants. So, when it came to the smash challenge, Amy found it to be a bit on the distressful side. She is a creative builder, after all, so it’s only natural for her to feel for those who had to smash their creations, and watch them them spill onto the floor. A close second would be the bridge challenge, as both judges felt the stress and apprehension of the contestants when weights were loaded onto their Lego bridges.

During an interview with the Decider, Amy discussed what Legos meant to her. As a product designer for the company, she states that it’s the infinite creative choices that people, both adult and child, have with Legos. The possibilities to create and solve design problems are only limited by the number of bricks you have in your collection. If you don’t have the piece you require for your project, then solve the problem by finding another way to complete the build. In fact, that’s what Lego lovers do all the time during their play. You might buy a Star Wars Lego set one moment, then turn around and build a gas station from it.

This driven and creative product designer from Scotland has become a household name for those who adore Legos. When she appears on the show, it’s almost impossible not to notice that she towers above her co-hosts, Jamie and Will. If you’ve been watching at home and tried to gauge her height, then try no more, as we’re here to tell you that’s she’s a statuesque, 6 foot, 2 inches tall, while her co-host Jamie is 5 feet, 10 inches in height.