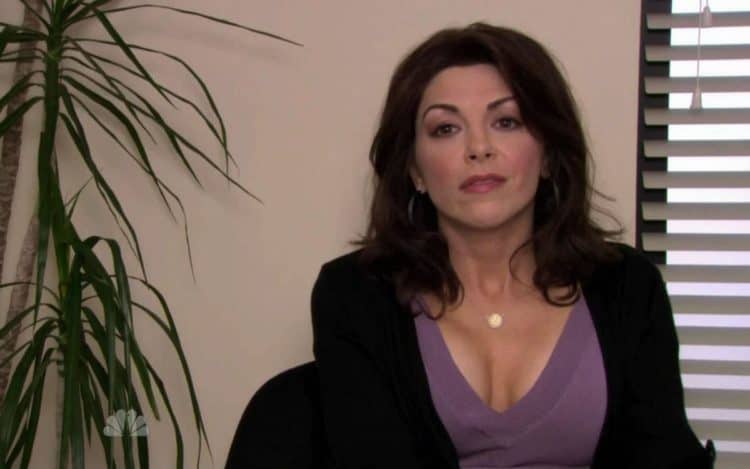 According to the OUP blog, the U.S Hollywood studios underwent a disastrous recess in the early 1960s. Fortunately, it led to a massive boom from 1967 and significantly increased its movie market. Hollywood is the focal point of the U.S film industry and boasts of tourist sites like The Hollywood Walk of Fame and Beverly Hills. Additionally, it accounts for more than 90% of the total revenue the U.S film industry generates. Such a developed entertainment sector is obliged to attract people into pursuing filming as a career, and one such actress is Amy Pietz. She is a 50-year-old American actress who has appeared in numerous Hollywood films and TV shows. Her full name is Amy Kathleen Pietz, and here are ten facts about her you probably did not know.

She was born on March 6th, 1969, in Milwaukee, Wisconsin, and is the adopted daughter of a nurse called Nancy Pietz and a truck driver called Arnold Pietz. She grew up in Milwaukee and attended the Milwaukee High School for Arts, where she graduated after four years. She then joined DePaul University, where she studied theater and attained an undergraduate degree in Fine Arts.

After completing her college, Amy began attending various auditions and landed minor roles in different television shows that kick-started her acting profession. Her first role was in the fiction drama, ‘Star Trek: Next Generation,’ which aired from 1987 to 1994. In 1993 she played a small role in a TriStar Picture film known as ‘Rudy’ and featured in WB’s canceled drama called ‘Muscle’ in 1995. Her significant breakthrough was later in 1995 when she starred as Annie Sparado in the NBC drama show, ‘Caroline in the City.’ The program aired for four seasons and was about Caroline, a Manhattan cartoonist who spends most of her time courting lovers and meddling in her friends’ and neighbors’ affairs. Amy’s character was a dancer, Caroline’s neighbor, and her best friend.

Amy has featured in over ten movies and fifteen television shows in her career that has spun for more than twenty years. She is well known for playing in ABC’s drama sitcom, ‘Rodney,’ that aired from 2004 to 2006. The series which ran for two seasons was about the family life of a married couple, Rodney and Trina; Amy played Charlie, who was Trina’s sister. From 2007 to 2008, Amy acted in CW’s program called ‘Aliens in America’, where she played Franny Tolchuck, the mother of Justin Tolchuck, the main character. She also cast a minor role alongside ‘Empire’ superstar Taraji P in the 2001 Lifetime series called ‘The Division.’ Additionally, Amy has guest appeared in numerous hit shows such as ‘How to Get Away with Murder,’ ‘Two and a Half Men,’ ‘CSI: Crime Scene Investigation’ and ‘The Office.’

The U.S film industry is characterized by several events that recognize the best performing actors and honors them with various prestigious accolades. One of them is the Screen Actors Guild (SAG) Award that applauded Amy as the Best Female Actor in a Comedy Show for playing Annie in ‘Caroline in the City.’ The SAG Award is one of the most significant ceremonies in Hollywood that appreciates exemplary actors and first held its events in 1995. Recipients of the SAG awards include the celebrated Heath Ledger, who played ‘the joker’ and the famous ‘Fences’ actor, Denzel Washington.

In 1997, Amy married a producer and actor called Kenneth Alan William in a private ceremony that took place in her hometown in Milwaukee County. The two lived together for nine years before their marriage ended in a swift divorce in 2006. In a recent interview, Amy stated she and her ex-husband do not have bad blood, and they still keep in touch decades after their separation. On January 10th, 2010, Amy remarried a man called Frank Stier, and she is stepmother to the three children Frank had in his previous marriage.

The actress has openly stated in interviews that her dogs are part of her family, and they hold a unique position in her life. She is a proud owner of two dogs that keep her company on several occasions. One is an Australian Shepherd, and the other is a hybrid. The actress is known for carrying her dogs to various places, especially when she is holidaying during the summer.

We all have activities that we like doing in our own free time; Amy is not different and enjoys skating when she is not acting. According to Explore Georgia, Georgia is one of the most appealing places to visit because of the mild climate all year round. In 2014, the actress, alongside her husband, visited the state, and the two shared pictures of themselves skating and having a memorable time on the ice.

Amy is not your typical actor whose focus is on acting alone. The actress is outgoing and skilled in other entertainment activities such as dancing and singing. Throughout her upbringing, Amy learned professional ballet dancing but gave up her ballet dream to pursue acting due to the career’s low pay. She is also a competent opera singer, a skill she learned in Wisconsin Conservatory of Music when she was growing up in Milwaukee.

Throughout her career, Amy has managed to amass a substantial amount of fortune and has a net worth of an estimated $12 million. Most of her wealth comes from her acting career, but she also has considerable investments that partially make her money.

10. She is an environmentalist

Amy is an active participator in environmental events and festivals. She is a frequent volunteer at the North Carolina Azalea Festival that showcases beautiful gardens and appreciates Mother Nature’s beauty. During its annual 60th festival, the event honored her with the 2007 Azalea Festival Queen in an outdoor ceremony that happened in Wilmington, North Carolina.