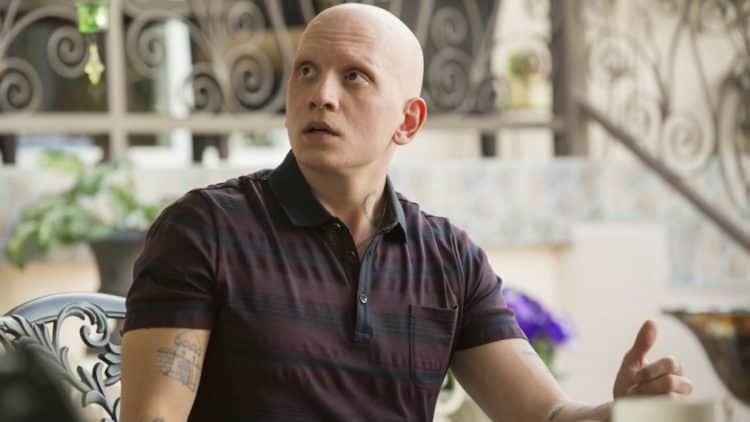 Anthony Carrigan is one of those actors you don’t forget since he does stand out and not just for his acting. His appearance is something you might seem to think is just for effect but if you see him without any makeup or added hair on his body then you’re seeing him as he is. It might seem odd but his acting tends to overshadow his appearance quite often since he can easily fit into a role in a way that allows people to forget what he looks like for a time so that they can focus on his place in a movie or show. In many ways he’s one of the perfect supporting actors since he is so easily noticed and kind of takes away from the rest of the project in a way that allows for added surprises that folks might not have seen coming since they’re focusing too much on his appearance and not on the story. It’s kind of a cheap way to get attention for the project but it works. Plus, his acting skills are great enough that it doesn’t really matter what he looks like.

Here are a few things about Anthony you might not have known.

10. He’s been cast in the upcoming Bill and Ted movie.

According to Kevin Burwick of MovieWeb he’s already been chosen to join the cast, but it’s not yet certain just what role he’s going to be playing. The part of the villain seems to be a good guess but it’s not known just who he’ll be playing.

This isn’t a fatal disease but it is something that’s kind of hard to imagine since the body’s immune system actually begins attacking hair follicles, causing bald spots to occur all over. There is no known cure for this and Anthony has been struggling with this since he was young.

He’s been a villain in The Flash and in Gotham and been pretty ruthless in both cases. In The Flash he played The Mist, while in Gotham he played the ruthless thug known as Victor Zsasz. Both roles were well done but it seems as though Zsasz might have been the more notable of the two.

7. His appearance often leads to him being typecast.

Some actors do tend to get typecast largely because of the way they look. It’s not entirely fair but it does seem to be the norm since a lot of audience members can’t seem to see them as anything else. So far though Anthony has done such a great job that it’s easy to see him as one character or another.

The two were together for quite some time before deciding to tie the knot in a private ceremony. It is kind of interesting to think of whether or not Anthony has picked up anything of the game from his wife or if that’s entirely her domain.

5. Anthony has a decent following on social media.

It’s safe to say that he’s not the most popular guy on social media but he does have enough of a following to think that he’s popular enough that people know about him and want to know more about his life and career.

4. He gave up trying to hide his disease and simply shaved his head.

Just looking a pictures of what his disease can cause, random bald spots all over a person’s head and body, would probably be enough for a lot of people to just say heck with it and shave everything off. He’s used fake hair for various roles in his career but otherwise he stays bald.

It seems that being typecast isn’t the worst thing in the world since it’s gotten him paid and helped to create a very financially stable lifestyle that he happens to enjoy. Plus, he’s such a positive individual anyway that the money is just another way to enjoy life it would seem.

There’s still a lot of years for Anthony to develop his career into something that sees him playing something other than the villain, but that all depends on what he wants to do and where he’s the most comfortable when it comes to his career.

1. It’s not surprising he’s a big advocate for body positivity.

People are unbearably cruel when they find something different about a person and it shows a lot of times when a lot of folks tend to focus on what they think of as weird and unusual. But Anthony has taken this in stride and has created a career that he’s both proud of and enjoys while practicing what he preaches as he continues forward.