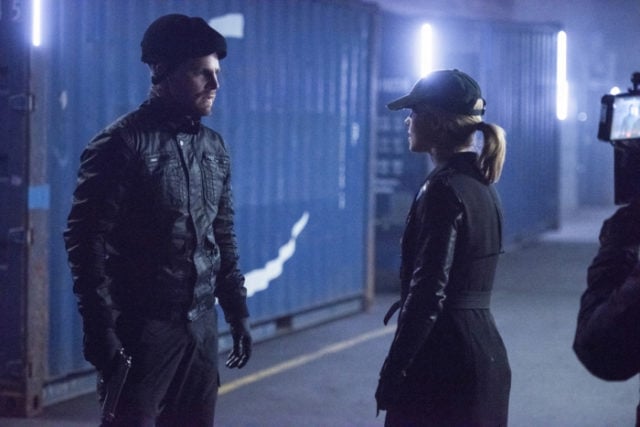 Well, that’s a hell of a way to kick off the final stretch of the season, isn’t it? Tonight’s spectacular episode ofÂ ArrowÂ set the stage for a tense, thrilling, and emotional conclusion to Season 5, a season that has been, in my opinion, the show’s best since the unmatched Season 2. However, if the next four episodes ofÂ ArrowÂ can reach the same incredible heights that “Dangerous Liaisons” hits, there’s a chance that Season 5 could match, if not surpass the quality of Arrow‘s outstanding second season. But in order to do that, the show is going to need to do what it does when it’s at its best and focus on the Holy Trinity of characters, the Big Three, the OTA: Oliver, Felicity, and Diggle.

The reason why “Dangerous Liaisons” is one of the best episodes of Season 5 is because it turns its attention over to Oliver, Felicity, and Diggle and allows the three of them to have meaningful interactions with one another. There are debates over morality and whether the ends justify the means, but none of it feels like surface-level superhero discussions and that’s all because it’s rooted in the deep, powerful history that that these three characters share.

Simply look at all the mentions and nods to the past in tonight’s episode if you need proof of that. When Diggle tells Oliver that the two of them know what grief can do to a person, he’s specifically referencing not just Laurel’s death but also Tommy’s and Moira’s and, of course, Andy’s. And when Felicity calls out Oliver for not having her back, for not supporting her actions like she has supported his throughout the five years she’s been a part of Team Arrow, it’s easy to remember the countless times that Felicity went along with Oliver’s more problematic plans or allowed him to use his less-than-ethical methods to take down villainsÂ that were threatening Star City.

But more importantly, what Felicity says in that final scene, and really what she and Oliver say to each other throughout the entirety of this episode, reminds us of how essential their relationship is toÂ Arrow‘s DNA. What the two of them have can’t simply be defined as a romance; they’re not just like every other TV love story. As we’ve seen numerousÂ times throughoutÂ Arrow‘s five seasons, Felicity Smoak has been and remains Oliver Queen’s conscience–she’s his most enthusiastic supporter and his harshest critic, the voice inside his head who constantly tells him that he can be better and do better, even when he keeps doubting himself.

However, in “Dangerous Liaisons,” the roles are reversed, as Oliver tries to bring Felicity back from the brink of darkness, and even though he isn’t successful, it still serves as an important piece of their story and a major sign of his evolution. The Oliver Queen of old, the person who was more monster than man, would have never objected to Felicity’s work with Helix and their plan to break Cayden James free from ARGUS custody; if their actions ensured that they would be able to track Chase, the old version of Oliver would haven’t blinked an eye at breaking the law or injuring innocent ARGUS agents. Now, though, after Chase has forced him to confront the monster inside and after five years of Felicity’s constant, unwavering support, Oliver is finally ready to be that conscience for Felicity–he is ready to encourage her and advise her to make the right choice for all the right reasons, to ensure that she doesn’t fall into the same pit of darkness that he has been trapped inside of in the past, and to help her be the best version of herself.

All of this is why Oliver and Felicity are finally at a place now in which they can believably reunite as a couple. While the two of them have always had magnificentÂ chemistry and have always possessed the ability to make one another laugh or smile (just look at the grin on Oliver’s face after Felicity mentions that he’s finally using the front door of her apartment in tonight’s episode), they needed to reach a place of growth and maturity, a place in which they both could be sounding boards for each other, strong individuals that bring out the best in one another. That was there before in terms of Felicity always bringing the best out of Oliver, always inspiring him to be a true hero, someone that the people of Star City could look up to. But now that Oliver has confronted his demons, that he’s dealt with his original sin of being a killer for killing’s sake, he’s finally able to purge himself of the guilt and pain that restricted him before, that caused him to lie and keep secrets, which is the whole reason why Felicity broke off their engagement in the first place. Oliver is now ready and worthy to be a true partner to Felicity, and with next week’s episode, “Underneath,” centering on the two of them and featuring pretty much nothing but Oliver/Felicity scenes, I think he’ll be able to prove that to his formerÂ fiancÃ©e and put them on the path to their romantic reunion.

The Oliver/Felicity conflict in tonight’s Arrow is extremely well-written, but it also helpsÂ that Stephen Amell and Emily Bett Rickards are fantastic throughout the hour, delivering what might be their best work since “Who Are You?”Â (another terrific episode that primarily focused on Oliver and Felicity–hmm, I’m sensing a pattern here). David Ramsey is also absolutely heartbreaking, as Diggle deals with the fact that Lyla, unlike Felicity, might not be able to be brought back from the darkness and that, despite how much he loves his wife, the two of them may never be able to resolve the problems that broke them up years ago. I’m still hopeful that Lyla’s turn here, as she begins to understand why Amanda Waller was the way she was, isn’t permanent and that she and Dig will be able to find a way to make it through this. However, whether the two of them can bounce back from these ARGUS-related issues or not, Diggle is going to need friends to lean on, and you better believe that it will be Oliver Queen and Felicity Smoak. Just like he’s been there for them throughout their years of up-and-down romance and emotional turmoil, they will do the same for him.

Outside of all the outstanding emotional moments throughout “Dangerous Liaisons,” the episode also offers some tremendous action, particularly that final set piece in which Helix breaks Cayden out of ARGUS custody. Everything from Dinah taking down the mercenaries in a hand-to-hand fight to Curtis using his T-Spheres to scare off his enemies is so much fun to watch. Plus, the action only benefits greatly from the fact that we are so invested in the emotional stakes of it all; we understand that what’s going on here is bigger than just Team Arrow stopping a villain–for Oliver and Diggle, this is a battle for Felicity and Lyla’s souls.

And then just when you think the episode can’t get any better, there’s that cliffhanger: Oliver and Felicity discover that Adrian Chase is inside the Arrowcave and then a bomb goes off. What type of bomb is it? Are Oliver and Felicity okay? What exactly is Chase planning? These are all exciting questions that “Dangerous Liaisons” leaves us with, and after how entertaining and emotional this episode was, I can’t wait to see what happens next week. What a way to come back from a four-week break. Welcome back,Â Arrow. I missed you.

Felicity clashes with Oliver and the rest of the team when she aligns herself with Helix to find Chase in a spectacular episode of Arrow.