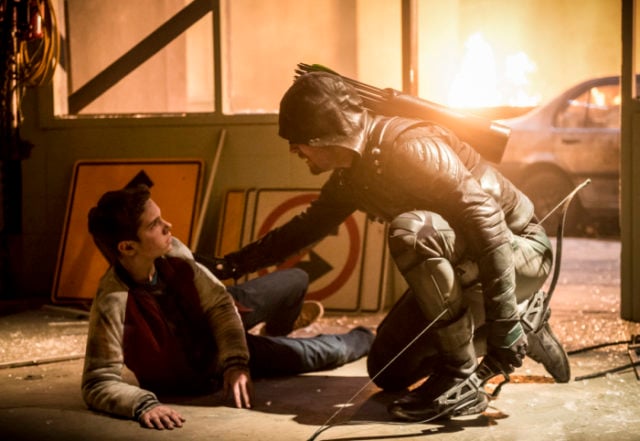 Throughout Arrow‘s five-plus seasons, Oliver Queen has always struggled to tell the truth. Most of the time, these secrets that he keeps come from a good-hearted, well-intentioned place; typically, in the past, Oliver lied to the people he loves because he was trying to protect them, not only protect them from the harm that the truth could cause them but also the pain of getting to know the real Oliver Queen. It’s easy to forget that, up until his and Felicity’s breakthrough in last season’s “Underneath,” Oliver always defined himself as a killer, even when he was being a hero. He didn’t believe he deserved happiness or love, and he viewed himself purely as a tool of vengeance and justice, never as an actual human being who could have a life outside of his work as the Green Arrow. Any time he tried, it would blow up in his face due to his own self-doubt and self-sabotage.

After that breakthrough with Felicity in Season 5, Oliver Queen has become a more open and mature person, and we have rarely seen him fall back into his old habits of lying and secret keeping. He’s allowed himself the opportunity to love and be loved, to finally let Felicity see and know the real him, and he’s been willing to trust and forgive others who have hurt him in the past, such as Slade and, most recently, Rene. However, there has still been one person that Oliver has not been honest with and that’s William, who finally discovers in “We Fall” that his dad is back on the streets as the Green Arrow, and at first, he is understandably upset and disappointed. In many ways, William’s reaction to this news mirror’s Felicity’s response to Oliver’s lies about William in Season 4, the lies that ultimately caused the two of them to break off their first engagement; William is upset that Oliver is risking life but he’s even more bothered by the fact that his dad broke a promiseâ€”that he lied to him.

And who’s the character who so eloquently points this fact about William out? Well, of course, it’s Felicity Smoak, who compares Oliver and William’s up-and-down relationship to the troubled one she had with her own father. As Felicity explains, her father’s poor actions obviously bothered her, but what upset her the most was his constant lying; the secrets he kept did just as much, if not more, damage to their relationship than the illegal activities he practiced. But that doesn’t have to be the case with Oliver and William because William is strong enough to handle the truth, he’s mature enough to understand the crazy circumstances that led Oliver to don the hood again. Oliver questions how Felicity is so sure about this, and in one of the sweetest scenes of the episode, she responds with one word: “Genetics.”

That one-word answer works because of how well Felicity Smoak knows, loves, and understands Oliver Queen and because of the time and effort she’s taken to not just befriend his son but become a surrogate mother to him. We’ve seen Felicity and William bond over science, play games, and spend the holidays together, and it’s been clear from both the writing of theÂ ArrowÂ staff and Emily Bett Rickard’s performance that Felicity genuinely cares about him as a member of her family. She sees so much of Oliver in William and knows that the two of them should be closer than they are right now, which is why she’s able to bridge the gap between the two men with her wonderfully moving speech, which plays over the action of the two separate Arrow teams taking out Cayden’s men together.

In her speech, Felicity tells William about how long she’s known and loved his father, ever since he walked into her life with “a bullet-ridden computer.” “This is what he does best,” she says to him. “Nobody does it better.” And Felicity truly knows that because she’s been there with Oliver on this heroic journey since the beginning; she’s loved him for a long time and worried about him for a long time and has seen him at his worst, when he’s relied on the secrets and the lies and the repressed emotions. Felicity has seen through those mistakes, even when she hasn’t always accepted them; she’s recognized that Oliver’s choices have always come from a place of goodness, compassion, and sacrifice.

As Felicity explains to William, that sacrifice, the sacrifice needed to be a hero and to love a hero, to accept that there’s a chance that they might be taken from you at any moment, that type of connection is deep and rare and powerful. This connection is not born from a place of fear and doubt; it comes from hope and faithâ€”it comes from belief. It’s a belief that goes beyond simply trusting in another person; you trust in what they fight for, what they represent, and you understand that it’s bigger than the two of you. And once you believe in something bigger than yourself, once you take that leap of faith, once you embrace the pain and worry that come with sacrifice, you transform your love into something that’s impenetrable, something that can’t be torn down by evil, no matter how overwhelming it may seem. That’s the type of love that Felicity describes, the type of love that she and Oliver have, and by the end of “We All,” once William has listened to Felicity’s words and truly sees what his father is trying to do, it’s the type of love that he and Oliver are building towards as well. It’s a love between father and son that wouldn’t be possible without Felicity Smoak.

Felicity tries to help William come to terms with Oliver being the Green Arrow in a strong episode of Arrow.