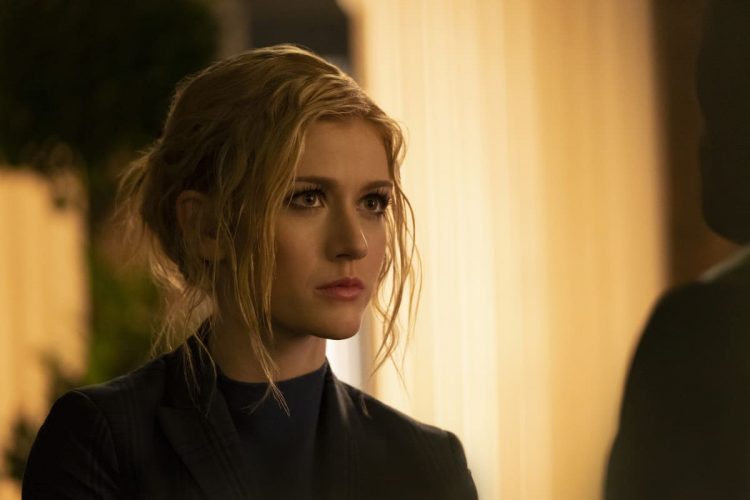 Throughout the first five seasons of Arrow, which is when the series always featured flashbacks in almost every episode, the show would dedicate at least one hour per season entirely to flashbacks. This week’s Arrow, “Star City 2040,” continues that tradition but does it for Season 7’s flash-forwards, which have been injected with new energy after the reveal that Blackstar is actually Oliver and Felicity’s daughter and William’s sister, Mia Smoak, and her partner is Connor Hawke, the biological son of Bronze Tiger and Diggle and Lyla’s adopted son. The two of them working with William, along with familiar faces like Roy and Dinah, has helped keep the spirit of the present-day characters and storyline alive in these flash-forwards over the past few episodes. However, “Star City 2040” links the two main but seemingly separate storylines in a major way thanks in large part to the presence of Felicity Smoak.

Last week’s episode of Arrow ended with Mia and William preparing to travel to the Glades to find Felicity, and they do spend about half of “Star City 2040” in search of their mother, going undercover at Cyber-One and teaming up with Connor (who is revealed to be an agent of Knightwatch, aka a “good version of ARGUS”). But Felicity is in a good chunk of the flash-forwards that fill this week’s episode ofÂ Arrow, both before and after her children discover her locked away in a cell, and it’s this connective tissue that results in “Star City 2040” being one of the best episodes of Season 7.

Felicity’s presence throughout the early years of Mia’s life, along with the reveal that she’s the person who created Archer, provide insight and answers to so many of the questions that viewers have had throughout this season. No, it’s not every answer that fans have been clamoring for (people can still debate whether or not Oliver is dead in the flash-forwards), but each answer is an interesting one, from Felicity’s choice to keep Mia hidden to having Nyssa be the one who trains her to protect herself to hiding whatever secret hacking work she is doing from her daughter. Felicity’s choices here make sense, even if they’re controversial; they are in line with her and Oliver’s commitment to protecting their children (something Felicity continues to do for her son as much as her daughter by monitoring William and more than likely bankrolling his company under the guise of an anonymous backer) and they echo the actions of Moira Queen, who did not always make the best or most moral decisions when it came to her children but they were always made with good intentions. The same can be said for Felicity’s parenting of Mia. It’s by no means perfect, but who can blame Felicity for being overprotective of her daughter when she’s already lost so much else, from her son to her husband to her home? Plus, it appears, given the final scene of “Star City 2040,” that Felicity blames herself for everything bad that will soon be happening to vigilantes in Star City in the present-day storyline. If that’s the case, then, yet again, it would make sense that Felicity would not want to risk Mia’s safety by allowing her to explore the outside world; all of her other more recent risks have seemed to backfire, costing her more than she has been willing to or should have to give up. She wants to hold on to the last thing, theÂ last person, who means the most to her as tightly as she possibly can.

It’s that overprotective parenting that leads to Mia leaving home and going into Star City to carve out her own identity as Blackstar, an identity that does not carry the weight of her parents’ legacy over it. Of course, as we’ve seen so many different times throughout Arrow‘s run with Oliver trying to evade the pasts of both Moira and Robert, it’s nearly impossible for children to escape the legacies of their parents, especially ones as well-known as Oliver Queen and Felicity Smoak. However, unlike Oliver who has been forced to reckon with his father’s worst impulses, his most horrid mistakes, Mia still has the opportunity to learn more about her parents’ best moments, their most heroic acts, especially given that her mother has returned to her life. And more importantly, she now is free to choose whether she wants to follow in Oliver and Felicity’s footsteps or not. As she and Connor discuss, growing up as the children of heroes was a burden that they didn’t get a say in. But when it comes to becoming heroes themselves, to helping to save Star City? They actually get to decide, and we can see that Mia, despite whatever problems she may have with her parents, possesses many of their best qualities, traits that will not allow her to sit on the sidelines when Star City’s citizens need protection.

Both William and Felicity tell Mia how much she reminds them of Oliver, from her physicality to her brooding nature. However, it’s ultimately Felicity’s words that Mia embodies during the second half of “Star City 2040,” when the team goes undercover at Dale’s party and she’s forced to take on multiple goons by herself before firing an arrow that saves the day. “Being a hero is my purpose,” Felicity tells Mia and William after they save her, explaining that she cannot leave until the bombs are defused. And now heroism appears to be Mia Smoak’s purpose as well, a purpose that has been passed down to her by her mother and father, but most importantly, a purpose that she has independently chosen for herself. We may be nearing the end of Oliver Queen’s journey on Arrow, but Mia Smoak’s story is just beginning. “Star City 2040” is one hell of a good first chapter.