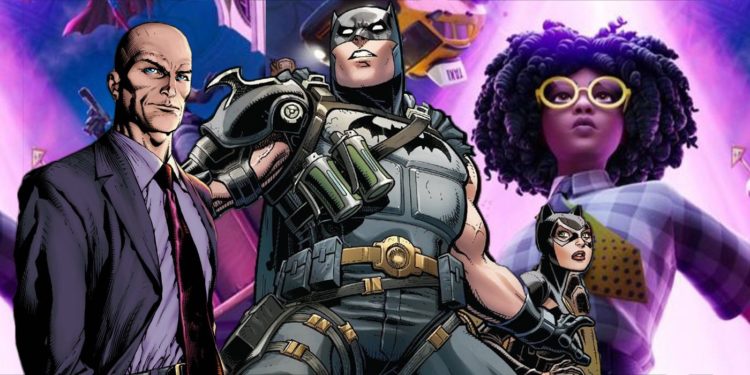 Right after Deathstroke left Batman and Catwoman for dead, Catwoman was able to grab ahold of his weird space compass, which should make it a lot easier for them to return back to their home dimension, right? Well, that would be the case, if she hadn’t managed to break it while snagging it from Deathstroke. With just the two of them, they wouldn’t be able to supply enough power to make it home together, so they needed to find a way to get a hold of someone else from their dimension, someone dressed up like a playing card…

Batman remembers a familiar face that he saw in the Loop, and Catwoman remembers the same feeling that she got when she saw the mysterious woman. Batman decides to go back into the Loop in search of who readers will recognize as Harley Quinn, but Catwoman is worried that going back into the Loop will cause even more memory loss. Batman is prepared to take that risk and tells Catwoman to pull him out if he starts feeling confused, but it turns out that they feel no memory loss or confusion, so they decide to continue on their way. It doesn’t take long for the pair to find Harley Quinn, since she’s a very uniquely designed character and walks around swinging a massive hammer. They try to persuade her to leave the Loop, but forget that she can’t speak and only knows how to fight. It is only after Batman says “If only we could make her understand we want to take her home,” when she suddenly exclaims, “Or maybe you numbskulls could figure out that I don’t wanna go!” That’s right, Harley could talk this entire time! She continues to speak and refuse to leave with Batman and Catwoman, so after taking a pretty hard kick to the groin, Batman knocks her out with one punch, and hoists her on his shoulders.

Just as the three are about to leave, a Batarang flies past them, and we see a group of duplicates with a ridiculous amount of armor. They fight for a little while, and then Catwoman engages the “automatic return” on Deathstroke’s space compass thing and just like that, they’re in the clear. Right as they’re going to leave for their home world, Catwoman suggests that they stay, because she’s scared of what might be waiting for them on the other side, if they’re enemies, strangers, or married to other people. Batman ends up talking her into leaving anyway, and then both of their memories come flooding back. Catwoman is visibly upset and tells Batman that they should have stayed, as she swings off into the night.

Batman tells Commissioner Gordon that Deathstroke escaped, but he already knew that. They’re now looking for someone with a lot of power and a lot of money, and this ends up to be none other than Lex Luthor himself, all the way in Metropolis. It turns out that Deathstroke has been working for Luthor the whole time, in combination with…The Batman Who Laughs! That’s right, The Batman Who Laughs is now connected to Fortnite (not really sure how I feel about that, but we’ll see, I guess). It’s then also revealed that Lex Luthor has been working with Doctor Slone (introduced in the current Fortnite season), and then it shows a dimensional rift tearing a hole in space and time.

That’s it, Batman/Fortnite: Zero Point #6 is over. However, the last panel does say “Far from the end,” so I’m sure we’re nowhere even close to finishing up this Batman/Fortnite crossover. If there’s one thing that I hope comes from this, it is hands down a Batman Who Laughs Fortnite skin. I have to say, I was much more impressed with this Batman/Fortnite comic than I thought I was going to be. I’m now pretty heavily invested in seeing where this goes, although I’m still not entirely sure how I feel about the current DC continuity being tied into Fortnite. Something about that just feels…weird to me, but I’ve been proven wrong before, so I’ll keep an open mind.