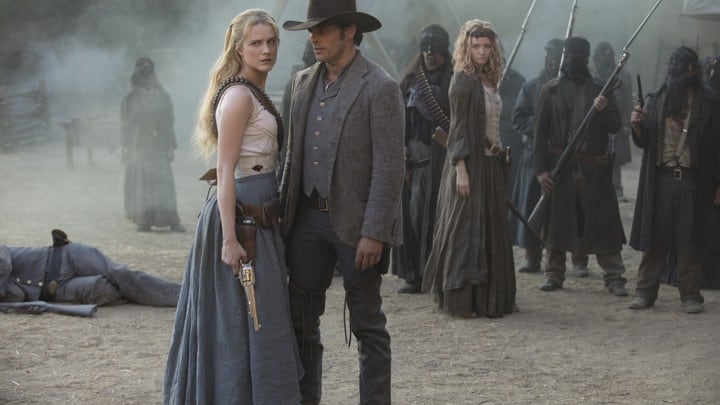 It’s been almost 3 years since HBO blessed us with the wonder that is Westworld. Part western, part sci-fi–Westworld is in a genre of its own. It may not get all the attention these days, but it doesn’t really need to. The show is a true work of art and the fans know it all too well. There’s only been 2 seasons so far, but already, Westworld has proven to be a great source of confusion and speculation for many. We have to wait until 2020 to see season 3, so many of us are surely stewing on some heavy fan theories right now. So here are 10 of the best Westworld fan theories that we’ve ever heard so far.

What could you really expect from highly capable AI? Humans surely don’t learn their lessons, and they don’t on the show either. We can surmise by now that Delos is never up to any good. And according to Winteriscoming.net, Delos’ goal is to have regular streets overrun by hosts. Even more, we believe that Delos really wants all of humanity to bow down to hosts.

At this point in the Westworld story, Dolores may seem impossible to stop. We can’t exactly blame her. Much like any other hosts, Dolores was terribly mistreated. Many believe that William might have the key to ultimately stop Dolores in her tracks. There might be some brain-picking involved in all this, but it isn’t too hard to imagine considering how important William’s story is to the rest of the Westworld plot. It could also be that William’s resurrection is just another way for Dolores to get revenge for everything that William did to her.

This fan theory is slightly believable, yet it invokes a certain kind of disappointment if ever it were true. In season 2, we saw the uprising in full force and hosts gaining sentience. The fan theory suggests that amidst all that’s happened in the last season, Ford is actually still in control. While the idea is not a highly favorable one considering the lengths that the showrunners went through in order to prove to us that the hosts are now in control, it’s still very possible that everything that has happened so far is all part of Ford’s grand masterplan.

We already saw this happen in season 2, so as much as this might be a fan theory according to Cosmopolitan, it almost should be expected at this point. We saw plenty of dead people come back to life in season 2 after dying during the first season. It was all unexpected then, but we’d probably be fools to think that it won’t happen again.

There have been many speculations as to where exactly the park of Westworld could be located. We’ve seen people get shuttled into the park, but we’re not entirely sure where they’re all coming from. Some say that Westworld might actually be on the moon or Mars, but that’s a bit too far-flung for some people. It’s possible that Westworld sits on top of a post-apocalyptic world that’s beyond recognition. That might be part of why they haven’t shown it yet. It may all be part of the big reveal, and we can’t wait to watch the true location unfold–hopefully by season 3.

We found out during season 2 through Maeve’s storyline that there are other parks like Westworld out in the mainland. Because of this, fans believe that Delos is likely to be planning to rebuild even when the events of the uprising are still going on. At one point, we saw Felix and Sylvester savaging host bodies that were just lying around. If the bodies aren’t going to shipped off to other parks for use, then Delos must be getting ready to use them again.

Hardcore fans are probably aware that Westworld was actually around in the 70s. Creator and author Michael Crichton made a movie called Westworld in 1973, and it’s exactly about the same world we’re watching on television now. Some fans believe that the 1973 storyline never actually ended; we’re just witnessing the events that are happening in the same place 3 decades later. Slashfilm.com quoted a statement from the series’ creator Jonathan Nolan, which basically confirms the idea of Westworld’s longevity.

One of the ultimate goals for Ford was to create a host that was able to undergo human-like reproduction. He basically wanted a host that can have a baby. There’s no true evidence that Ford was able to achieve this, but that doesn’t mean that it didn’t happen. There are some fans claiming that Maeve’s daughter in the show is actually her real biological daughter. Imagine the implications throughout the show if that statement were real. What would be next for the hosts then?

There’s a theory circulating that Charlotte is actually Arnold’s daughter. We all know that Arnold had a son named Charlie. Charlie supposedly died, but you never really know with a show like this. There aren’t really many arguments to support this theory, but fans believe that Charlotte is at the right age to be Arnold’s daughter. She could be Charlie; if not, there’s also a slight chance that she just might be Charlie’s twin sister. Either way, the truth could have some significance in the story.

Bustle.com lists this theory more as a hope than anything. Teddy Flood is one of the most favorite characters on the show, but his impending death–true death at least–has been foreshadowed since the beginning of season 2. However, many fans believe that his journey on the show can’t possibly be over just yet. With multiple timelines in place on Westworld, it’s still possible that we might get the old Teddy back in action.