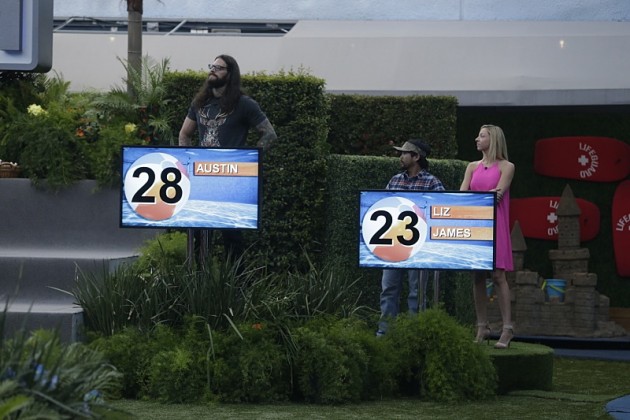 With drama queen Da’Vonne and beloved houseguest Meg on the block next to each other for the second eviction of the season, it was fairly obvious who would be going home this week on Big Brother. Shelli and Clay had been gunning for Da’Vonne all week and didn’t anticipate much trouble. A Big Brother Takeover as well as the discovery of the Twin Twist, however, had everyone questioning what the best move for their game would be. Da’Vonne all of a sudden had a glimmer of hope. But was it enough to save her from what seemed to be sure eviction?

If you’ve watched the first few weeks of this season, you know that Da’Vonne is not someone who will go down without a fight. After beating Clay to the seventh phone call from Kathy Griffin, she had even more reason to fight for her BB life, as she was granted the Power of the Last Laugh. This gave Da’Vonne the ability to pick three houseguests who wouldn’t be able to vote in the live eviction-just what she needed to raise her spirits. Now that she only needed a much more manageable five votes to stay in the house, and with an already guaranteed vote from her biggest ally Jason, she only needed to convince four more people to vote for her.

With half-hearted vote guarantees from Vanessa, John, and Audrey, things were looking up for Da’Vonne. At the same time, though, she noticed something happening in the house. Every few days Liz and Julia would swap places as part of the Twin Twist and Da’Vonne, who had been studying them for awhile, was finally convinced enough to bring it to the attention of the other houseguests. Everyone was shocked at first before realizing how plausible this might actually be, noting the differences between the two twins. Da’Vonne, who had revealed her information to everyone, tried to use this to her advantage and get Liz/Julia’s vote to stay. She told Liz that other people were suspecting that she was a twin and that the two of them needed to work together because the house was targeting both of them.

In retrospect, Da’Vonne probably shouldn’t have told the other houseguests about the Twin Twist before confronting Liz, instead using it as a way to gain her trust. Unfortunately, all of her campaigning wasn’t enough to keep her in the house over the incredibly likeable Meg, and even with Jeff, Jackie, and Becky not being able to vote this week, Da’Vonne was still sent packing. It was her talkative nature that probably ended up being her downfall but one thing’s for certain: Da’Vonne was a fun player to watch play the game, and she will be missed the rest of the season.

With Da’Vonne out of the house, it was time to announce the Big Brother Takeover for this week, though no specifics were given. All that we and the houseguests know is that it will be one big party this week and that there will be no have-nots. Before the party could kick off, though, the HOHs of this week needed to be crowned. In a party game called “Gronk Pong,” the contestants had to launch a ball into giant cups, each with a different point total. It came down to the wire, but Austin and Vanessa emerged victorious. This early in the game, you can see huge power shifts depending on who wins HOH. These two are already good friends and potential allies and it seems fairly certain that this joint HOH win will lead to them working together even further. Neither has shown their true colors yet in terms of who they might want to target, but both are smart players and should make decisions that will benefit their game.