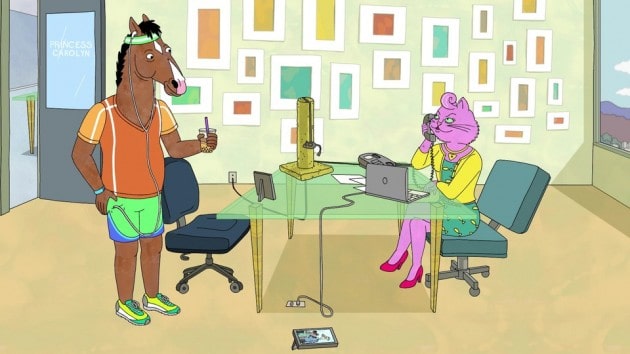 BoJack Horseman‘s first season is a journey of discovery; both for the audience, and for the show itself. Neatly split into two halves, the first six episodes act as a lovely, weightless satire of Hollywood and the culture it breeds; the second, a much darker, more existential study of a man coming to terms with his depression (something I wrote in-depth about last year).Â BoJack‘s clever delivery was really in service of something much more raw and emotional, and the season’s final five episodes saw a complete shift in the show’s tone, a drastic change thatÂ BoJackÂ handled effortlessly. Even as the narrative tambor changed,Â BoJackÂ never lost sight of its priorities, either with its characters or with its comedy, willing to be as absurd and clever as it was brutally honest and revealing. With that kind of versatility, it’s no surprise expectations for the show’s second season (which debuted today on Netflix) are at a fever pitch.

Picking up a month after the events of “Later” (itself a flash-forward three months into the future), “Brand New Couch” begins with BoJack trying to take a different, lighter approach to life. Being a creature of habit as we all are, he slowly begins to fall back into old patterns throughout the episode as he ‘prepares’ himself for the first day on set of the Secretariat film. Through a series of flashbacks, BoJack’s difficult formative years are depicted through conversations with his cruel mother, setting the stage for BoJack’s inevitable failures on set early on. Embracing the advice of his old idol Secretariat (advice given a month before Secretariat jumped off a bridge, dead at 27) to “run” from his emotional issues, BoJack is trying to follow the advice of an audio book guru to escape his childhood memories, an activity that proves unfruitful; after all, we can put headphones in our ears and blast strange voices in our heads, but they’re never going to quiet our darkest thoughts.

Make no mistake about BoJack: this show is a character study in depression, emotions heightened by the absurdity surrounding it, like Caroline and Vincent’s ever-maturing relationship (he’s got an office with her; no more working in the business factory!) or Mr. Peanutbutter’s lack of peripheral vision causing him issues (“I’m going on smell here, guys!). And what BoJack is trying to reconcile in this episode is very much a by-product of his depression; in fact, it informs the very reason why BoJack is depressed: it’s not his life falling apart (a problem he could always drink away), or his inability to find true peace within himself that makes him sad. As his mother points out, depression runs in the Horseman family; and as cruel as it is to hear BoJack’s mother tell him he’s fundamentally broken, there’s resonance to what she says, and how it relates to the show’s philosophy of BoJack’s journey through life.

BoJack’s depression is something that’s out of his control; it’s something he inherited, and like many family traits that are passed down through generations, they are a gift and a curse. BoJack’s depressive tendencies are what make him perfect for this role; they also keep him on the edge of drunken suicide at times, searching for connection in an empty, cruel world, a world that only grew emptier when Diane got married, and Todd briefly moved out (there’s a hilarious runner in this episode where Todd is wary of BoJack’s new house, and briefly lives in his car). In a neat, familiar touch of dramatic irony, BoJack’s gift is his curse; and this episode opens with great potential for the season to follow to explore the dichotomous directions this job is going to take BoJack’s soul, an already-precarious object he’s always in danger of losing. The darker he gets, the better his performance is going to be; and what happens when things are taken too far, and he snaps?

There’s not a lot of excitement to be had in “Brand New Couch,” despite the titillating title; however, as a reintroduction in Boj’s world, it does well to establish some of the themes to be explored through the season, and squeeze in a few hilarious running gags along the way – Caroline’s 26/27/28 floor jokes, shots at the Belushi brothers, Corduroy Jackson Jackson as BoJack’s co-star… the last goes on and in. As always, all those jokes come in service of something much more revealing, an allusion that even as things get “better” for BoJack and his life, he’s still not going to be able to be at peace with himself, or ever have faith in what he’s doing. Can we overcome our DNA and become different people? Or are we as Diane said in “Later,” defined solely by the things we do, not our own self-definition; regardless of what the answer may be, I’m fascinated to see how this second season ofÂ BoJackÂ explores this philosophic contradiction.

– Welcome toÂ BoJack HorsemanÂ reviews! Everything is a metaphor!

– I love that the director enjoys Todd’s ‘soothing’ face – but not as much as I love the fact Todd wears his sleeping cap under his beanie.

– Larry Turtletaub gets knocked over when the set (and Debra’s face) get lit on fire; watching him flail around slowly on the ground was hilarious.

– Sebastian calls from Northern Cordovia, trying to convince Diane to come out there. He does save time for a few death selfies, though. 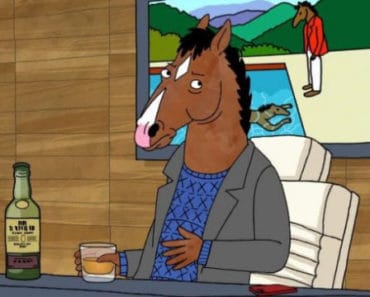 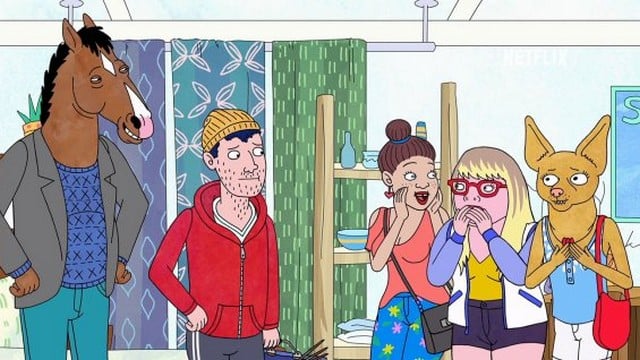 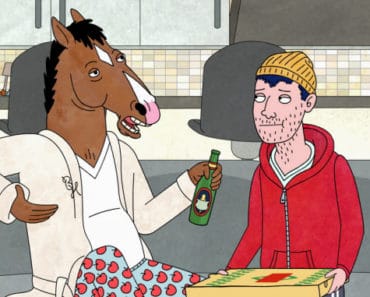 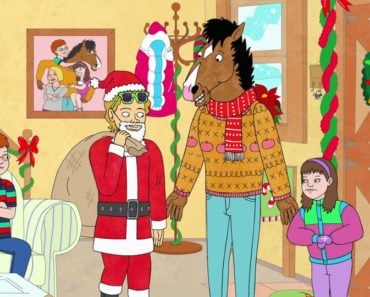 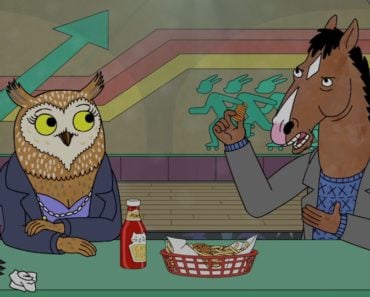 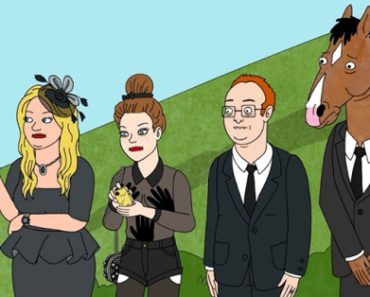