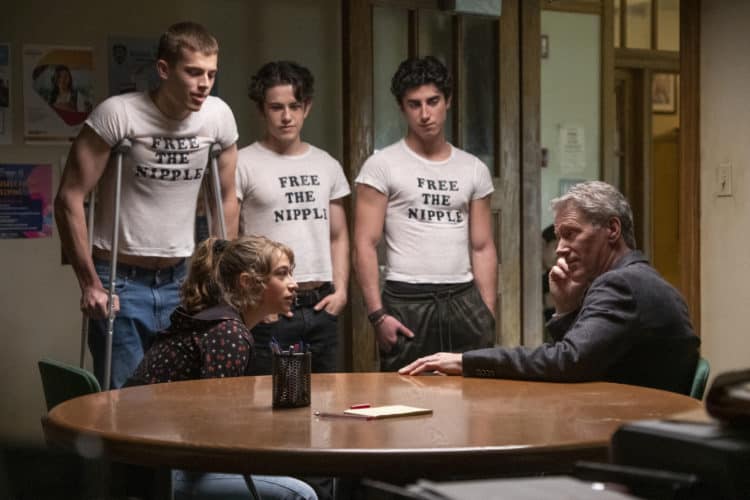 2020 is a year that most people can say they’ll never forget, and not in a good way. But for Brian Altemus many of the memories will be positive. In just one year, he has gone from being an unknown actor to getting the chance to share his talents with the world. The up and coming actor got a huge break when he was cast as Luke Friedman in the popular new Netflix series, Grand Army. Although his character certainly wasn’t one of the most likable people in the show, Brian did an amazing job at portraying the complexity of the character. Brian may be early in his career, but we feel confident that we’ll be seeing a lot more of him in the future.  Keep reading for 10 things you didn’t know about Brian Altemus.

If you’ve already seen Grand Army, you’d never be able to guess that Brian’s role in the show is actually his very first TV appearance. In fact, outside of Grand Army, his only other on screen appearance was a small role in a film called Never Rarely Sometimes Always.

Brian may be new to acting, but he definitely isn’t new to being in front of the camera. He has been modeling for the last several years and he has found a great deal of success that includes working with big brands and appearing in major publications. He is currently signed to Next Model Management.

3. He Loves His Alone Time

There is somewhat of a misconception that people who work in the entertainment industry love being the life of the party at all times, but that is not the case for Brian. Although he does love spending time with the people closest to him, he also had an introverted side and loves spending time alone. When he has time to himself he loves reading and writing.

Traveling is one of the few things that no amount of technology can replace. Nothing compares to the experience of getting to visit new places and be surrounded by different cultures. Brian is an avid traveler who has visited many countries including France, Dominican Republic, and England.

5. He Was A Spin Instructor

Like many people who work in the entertainment industry, there have been times where Brian has had to work a ‘regular’ job in order to supplement his income. For a while, he was a spin instructor at SoulCycle in New York City where his class promised to help participants build their confidence while also toning their bodies.

6. His Mom Is His Biggest Inspiration

Every person has someone or something who inspires them to go after their dreams and keep pushing forward. For Brian, that person has always been his mother. He told Fashionably Male, “My Mom has always been, and always will be, my inspiration. The strength that woman has is absurd. If I could be half the woman she is, I’ll be able to call myself a man.”

7. He Has A Close Relationship With His Brother

Brian’s mom isn’t the only person who has played a very important role in his life. He is lucky to have a strong support system and also has a very special bond with his younger brother. At one point, the two even had matching bracelets that they wore all the time.

8. He Is A Very Spiritual Person

Spirituality and religion are things that lots of people lean on to help them get through difficult times. Although Brian hasn’t gone into details about his exact beliefs, he did share with Fashionably Male that he is an “incredibly” spiritual person. There’s no doubt that his spirituality continues to play a large role in his life.

All of the proud dog lovers out there will probably be happy to welcome Brian Altemus to the team. He is a huge dog person and it looks like he has three golden retrievers that he likes to spend time with. It’s unclear if all three of the dogs are his but they have made frequent appearances on his Instagram.

10. He Spends A Lot Of Time Outside

Even though Brian’s celebrity status is beginning to rise, he is a very humble person who finds joy in the simple things life has to offer. One of his favorite ways to spend his free time is by being outdoors and appreciating the beauty of nature. He loves to go swimming, hiking, and paddle boarding.