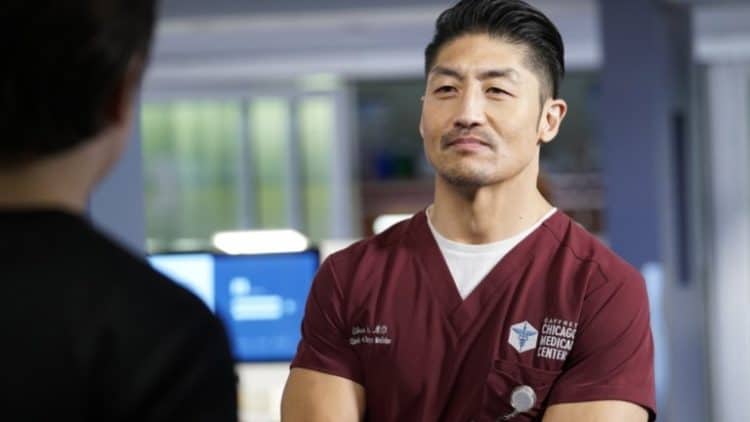 Best-known for his role as Dr. Ethan Choi in Chicago Med, Brian Tee has been a fixture on millions of TVs across the country for the last six years. Dr. Choi’s journey has been full of ups and downs that have allowed Ethan to show his wide range of acting skills. His portrayal of the sometimes too serious doctor has, in many ways, been the big break he’s always wanted. Although he was in the industry long before being cast in the series, the role has certainly elevated his carer. Now in its 6th season, Brian is continuing to light up the screen and fans love watching him do it. Keep reading to learn 10 things you didn’t know about Brian Tee.

Brian was born in Okinawa, Japan to a Japanese-American father and a Korean mother. He relocated to the United States with his family when he was only around 2-years-old and he was raised in the Los Angeles area. Brian is very proud of Japanese  and Korean heritage and feels a close connection to both cultures.

2. He Is A UC Berkeley Alum

Going to the UCLA was always Brian’s dream, but unfortunately he didn’t get in. At first he was devastated, but he started to feel better once he got accepted to UC Berkeley which is where he went on to attend. It was during his time in college that he signed up for an acting class. It didn’t take long for him to realize that acting was what he wanted to do.

3. He Is Been In Music Videos

Brian’s film and TV roles are what has made him famous, but he has been in a couple of music videos. He was in the video for the Far East Movement Song “Dance Like Michael Jackson“. He was also in the video for Don Omar’s song “Conteo“. Both videos have gotten millions of views on YouTube.

Although he has gone by the name Brian Tee for his entire career, that isn’t actually his name. Brian’s legal name is Jaebeom Takata. After graduating from college, he decided to use a more ambiguous stage name so that he wouldn’t hurt his chances of getting auditions.

5. He Was A Football Player

Long before Brian ever even thought about being an actor, his life was all about sports. He played football for many years and was the captain of his high school team. His days of competitive sports may be behind him now, but it’s clear that he still likes to keep himself in shape.

6. He Is Not Very Active On Social Media

Brian is a very private person and this has been a fact throughout his entire career. As a result, it’s not too surprising that he doesn’t spend a lot of time on social media. Even without posting very often, he still has 230,000 followers on Instagram. In addition to not being into social media, he also doesn’t do very many interviews.

7. He Is A Husband And Father

Since Brian is private, it goes without saying that there isn’t much information out here about his personal life. What we do know though, is that he is happily married to Mexican actress Mirelly Taylor. The couple has one child together named Madelyn Skyler. She was born in 1995.

It’s no secret that minority actors often struggle to find quality roles, and this is something Brian has had to deal with during his career. Brian told HalfKorean.com, “I have been offered on different occasions the stereotypical roles that I have passed on. I really look for something that makes me expand as an actor to really stick my teeth into.”

One quick look at Brian’s resume makes it clear that he is the kind of actor who isn’t afraid to try new things. On top of being in music videos, he has also done a little bit of voice acting. In 2008, he voiced a character named Jyunichi in the video game Saints Row 2. There’s no information on whether he plans to do more voice work in the future.

10. He Would Love To Work With Leonardo DiCaprio

Brian Tee has accomplished a lot of cool things during his career, and there are still lots of things he wants to do and people he would like to collaborate with. One day, he hopes to get the chance to work alongside Leonardo DiCaprio. He would also love to star in a movie directed by Steven Spielberg.