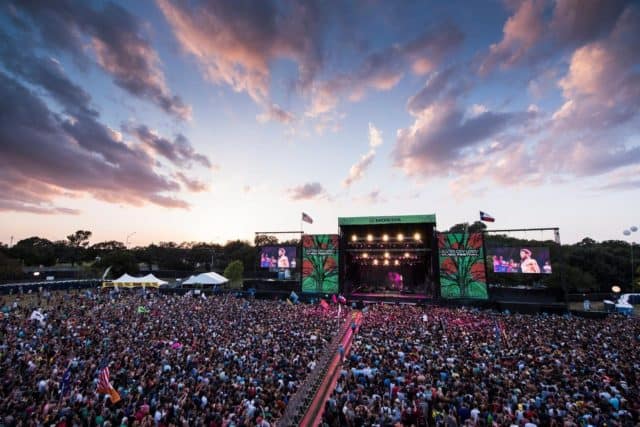 Austin City Limits Musical Festival is a music event that is held annually. It takes place at Zilker Park in Austin, Texas, and is hosted over two consecutive weekends in late September and early October, each lasting three days. It is an event that has grown in popularity since it began and now has as many as 450,000 people attending the festival.

The festival was founded in 2002 and is produced by C3 Presents, which is an Austin-based company. Originally, it was inspired by the KLRU/PBS channels’ music series, which is also called Austin City limits. The first event was only two days long and was organized by the founders of C3 Presents, Charles Attal and Charlie Jones. 67 bands performed on five stages and the attendance was around 25,000.

By 2003, around 100 bands were participating in the ACL festival and in 2004, the event was expanded over eight stages and extended to three days. The top attendance at the event in this year was 75,000 people. As a result of a rise in attendance figures, the festival promoters were forced to lower capacity as pressure was put on them by local neighborhood associations.

The festival was more established by 2005 and even won the Pollstar’s Festival of the Year Award. This year became known as the ‘Dust Bowl’ year as the festival crowd kicked up so much dust that it was difficult for festival goers to breathe. The organizers remedied this problem the following year by installing sprinklers on the site. They also added water and misting stations to help relieve those attending the festival from the heat.

The line-up for the 2007 event changed at the last minute as several big acts had to pull out for health reasons. These included ‘The White Stripes’, ‘Rodrigo y Gabriela’, and ‘Amy Winehouse’. This year, a fire also broke out when a propane tank was ignited.

With the exception of torrential rain in 2009, the festival continued over the next few years without any major dramas and rather uneventfully. In 2013, the organizers decided to extend the event over two weekends. Another significant fact about this year was that the event was canceled on the third day of the second weekend due to heavy rain causing floods.

In recent years, there have been many outstanding acts performing at the Austin City Limits Festival. Some of these have included Mumford & Sons, Radiohead, Foo Fighters, Florence and the Machine, and The Strokes.

Other than the musical performances, there are many other attractions at the ACL. These include the Austin Eats and the ACL Art Market. The former is a food court that was inspired by the New Orleans Jazz Fest and features food from the top caterers and restaurants in Austin. The latter is an exhibition of the works of local artists. Furthermore, there is an ACL Cares section at the festival that allows festivalgoers to give something back to the community. Some of the good causes that are supported by the event include Austin Music Foundation, HeadCount, Keep Austin Beautiful, and United Way for Greater Austin.