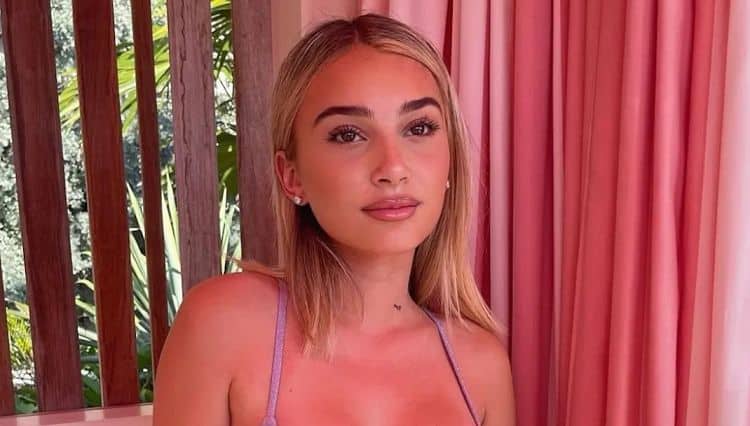 Anytime a person gets into a relationship with a celebrity, it’s important for them to understand that they’ll probably have to deal with a lot of attention from the public. While this proves to be too much for some people, Camryn Swanson doesn’t seem to mind. Ever since her relationship with rap star Tyga has gone public, Camaryn’s name has been all over the blogs. The couple’s relationship marks the first time Tyga has been open about a relationship since his break up with Kylie Jenner. So far, people seem to be loving the couple and they’re hoping to see a lot more of them on social media. Keep reading to learn 10 things you didn’t know about Camaryn Swanson.

1. She Is A Business Owner

There are probably some people out there who have assumed that Camaryn is with Tyga because of his money. Apparently, however, she has plenty of her own. She and her younger sister are the founders of a clothing company called Meaning of Mine which sells activewear.

2. She Has A Large Social Media Following

Camaryn’s relationship with Tyga isn’t the first time she’s been the subject of lots of attention. She already had a large social media following on both Instagram and TikTok. At the moment, she has more than 475,000 followers on Instagram and more than 58,000 on TikTok.

3. She Is A Private Person

Unfortunately for those who were hoping to learn more about Camaryn’s personal life, there really isn’t much information out there. Although she is active on social media, she doesn’t really share anything about her private life outside of the fact that she’s in a relationship with Tyga.

4. She Doesn’t Appear To Have any Connections To The Entertainment Industry

When Tyga and Kylie Jenner were dating, lots of people were very concerned about the couple’s age difference, particularly because Kylie was only a teenager when they started dating. Interestingly enough, Kylie is actually older than Camaryn. Camaryn is currently 21-years-old. She will be 22 in September of 2021. This makes her a whole decade younger than Tyga.

6. She Loves To Inspire Others

Camaryn may be young, but the significance of having a large platform isn’t lost on her. One of her main goals is to help inspire and empower people — especially young women — to understand that they can chase their dreams and become whatever they want to be.

We don’t know much about Camaryn’s family other than the fact that she has at least one sister, but it does look like she comes from a close family. Although Camaryn and her sister are business partners, they also seem to be good friends. She was born and raised in South Florida and, according to Voyage New York, they come from a family of entrepreneurs who taught them all about the business world.

8. It’s Unclear How Long She And Tyga Have Been Together

Any time a celebrity announces that they’re in a new relationship, their fans can’t help but to want all the tea. Sadly for all of the Tyga fans out there, there isn’t a lot to spill in this situation. The two started being seen together early in 2021, but we aren’t sure exactly how long they’ve been together or how they met. There’s a chance these details will be made public eventually.

9. She Loves Relaxing By The Water

As a true Florida girl, Camaryn can’t help but be attracted to the water. Whenever the weather is nice, you can catch her in her bikini soaking up some sun. While there’s no doubt that Florida has some of the most beautiful beaches in the country, Camaryn is fortunate to be in a position that allows her to visit any beach she wants.

After doing some digging, we came across a YouTube channel that’s associated with the name Camaryn Swanson. However, no new content has been uploaded since 2012. The video shows a young couple who appears to be hanging out in Camaryn’s room. The video is so old that it’s a little difficult to tell if it’s actually Camaryn. Since the spelling of her name is pretty unique, there’s a good chance the channel belongs to her.