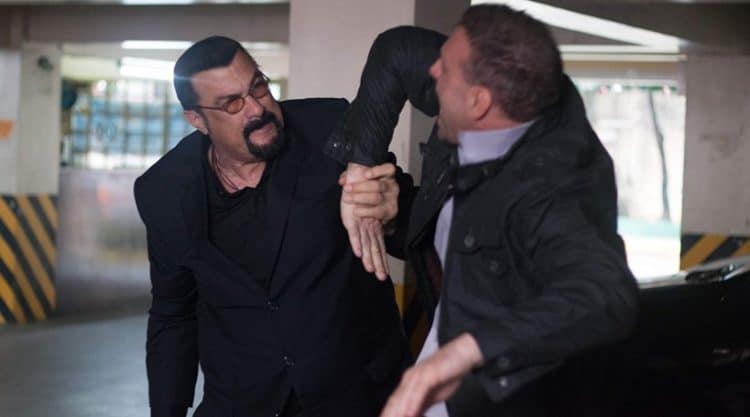 It’s too easy to take potshots at Steven Seagal right now since he’s older, he’s heavier, and his legacy hasn’t quite cemented itself as well as one would have thought. Back in the day when the action movies were coming fast and furious and it was cool to see people beaten with an inch of their lives, limbs broken, the bad guys being flung all around, Seagal was one of the absolute best, in terms of being fun to watch. But behind the scenes he was wracking up lawsuits and Razzie’s like few others possibly could. Bringing him back to action relevance at this point is something that few people in their right mind would think is entirely possible, but keeping his career in the direct to DVD movies or direct to streaming is still feasible. After all let’s be entirely fair here, while he does play a certain type of character ALL THE TIME he does make it somewhat fun now and again since the old-school way that he breaks people down kind of brings back fond memories.

But considering how much legal trouble he’s been through in the past, both recent and decades ago, it would seem that he’s too much of a liability to bring back to the big screen in a significant way. Plus, if anyone remembers the last time he was in a film that was set to make some real noise they might recall that he was the villain, something you don’t see too often with Seagal. In the film Machete he actually played the big bad that knocked the hero around a bit and then acted as though being stabbed wasn’t a big deal. That’s just one reason though why his action relevance is not longer all that possible since thinking back upon his many upon many characters it’s easy to see that he’s been a martial arts superman, which was great back then but now is kind of dated and completely unreal.

General Commander is, unfortunately, the type of film that seems like it’s going to rely on the same type of procedure and edgy nature that so many films before it have relied upon. It’ll be one more drop in the action pile and if anyone on the cast is lucky it might get them noticed and push their career forward. But for Seagal, who really hasn’t changed his characters all that much throughout the years, it’s just another way to make himself look awesome and capable of taking on anyone without taking all that much damage to his person.

Anyone ever notice that? The moment you see Seagal in a movie you can bet that unless there’s a reason for it, he’s not going to end up being too badly hurt since the challenges he faces are so typically beneath him that his skill, strength, and speed make the bad guys look like novices. There have been some movies in which he’s been wounded, let’s get that out of the way, but even the worst injuries have seen him come back stronger, more determined, and every bit as deadly. Plus, most of the guys he’s gone up against in the movies haven’t known how to fight it seems and throw punches that are geared more towards a one-punch knockout since they really don’t know what they’re doing. Even those that seem to know how to fight are still beneath him, and his characters take them out easily. This is unfortunately why the relevance for his action career is kind of fading.

Another actor that’s kind of like this is Jason Statham, since a lot of times his characters will be completely dominant and suffer little, if any, real damage when they’re fighting. The difference between Statham and Seagal however is that Statham can actually act and he does take his lumps now and again. Seagal has simply tried to be the unstoppable force for too long and it’s been kind of old news for a while. A lot of people want to see the heroes get roughed up a bit since it does seem to make things a little more realistic considering that in real life people don’t just walk away from fights the way Seagal does when the bad guys are broken and bleeding. His use of Aikido is real enough but the manner in which it’s used in a movie is, as many fighters would attest, not the way a fight tends to happen, especially between those that know what they’re doing.

So if he’s making his way back to relevance, or trying, it seems like he’d have a long and bumpy road to go not only because of his worn-out act that never seems to change, but also because he’s just not as popular as he used to be.