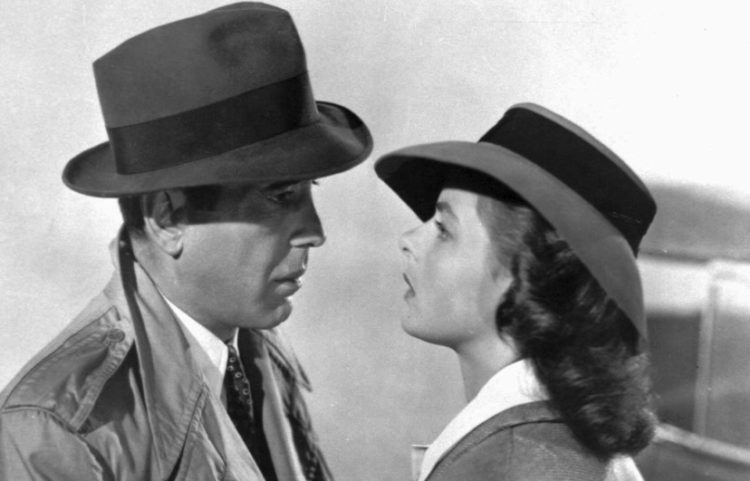 Casablanca is not just one of the finest motion pictures ever produced, serving as the quintessential archetype for an entire art form, but transcends the realm of celluloid to exist as a cultural icon and social phenomenon. Winning the Academy Award for Best Motion Picture in 1944, Casablanca has been brilliantly characterized as “a wonderful, sentimental, absolutely magnificently put together Hollywood film” (Thurman). The greatness of Casablanca as a film is undeniable, perfecting nearly every element that the Hollywood style had to offer. However, answering the question of why Casablanca ascended mythical status and has remained there for nearly 75 years necessitates greater inspection.

On the surface, it seems rather improbable that Casablanca, a love story with the backdrop of World War, filmed and released deep in the heart of World War II, would be a genuine box office success. What would eventually be indisputably hailed as a timeless classic, Casablanca was, “a melodramatic, topical story adapted from an unproduced stage play, hastily and repeatedly rewritten by several hands, and still incomplete on the last day of shooting” (Murray). The stars of the picture were certainly no guarantee of greatness either as Humphrey Bogart, cast as the lead role and known primarily for his gruff and tough hoodlum roles, “had never carried a movie as the sympathetic romantic lead. Ingrid Bergman was under contract to another studio when casting began” (Murray). And yet the picture endures. Why?

Casablanca stands the test of time for a myriad of reasons but I believe the greatest are the film’s common relatable elements. By incorporating so many applicable themes within the narrative, Casablanca essentially strikes a chord with every audience. This is a love story, a war movie, a thriller, a spy film complete with action, suspense, mystery and intrigue. By integrating themes such as “sacrifice, being concerned for your fellow human beings, and of people working together for a common and worthy goal” (Miller), Casablanca “appeals to the better angels of our natures and reminds its audiences that they can always choose the right path in life” (Miller). At its core, Casablanca is an endorsement for being a good person and doing the right thing and those are sentiments that will always resonate with audiences and do not lend themselves to expiration dates concerning the moviegoer. Acting justly, courageously and honorably transcend any era which is why Casablanca has continued to be relevant in so many eras. However, these central thematic qualities would not have near the impact had they not of been illustrated with such an exceptional combination of production, screenplay, direction and acting.

The performances of the stars are rather obvious in their excellence. From Bogart’s iconic, “cynical Rick Blaine, a divided soul with his good and evil sides battling it out” (Miller) to Claude Rains’ “scheming, cheating, back-stabbing, lying, womanizing, corrupt, moral-less Capt. Renault” (Aurora), each performance puts tremendous skill on display. Bogart’s role in particular transcends his screen time because he actually established a new medium to exhibit the protagonist; “Bogart’s Rick was Hollywood’s first rebel hero” (Levy). Rick forever influenced the way Hollywood leading men would be portrayed and written for. This is because Bogart’s Rick would signify the way that American men want to view themselves and “considering the enduring popularity of this character, Rick was not only the prototype for a new kind of Hollywood hero, but also the prototype for a new kind of American” (Levy). With such a dynamic and talented cast, each seemingly perfectly implemented, it is no wonder that the outstanding screenplay was illuminated with such luminosity. However, as often is the case with such star power, the contributions of the director are often overlooked and in the case of Casablanca, quite deliberately so. Director Michael Curtiz recognized that he had a brilliant script and that the biggest mistake he could make would be to get in the way of the narrative. Although Curtiz’ technical genius bathed the film with in unmistakable feel, in particular his use of low-key lighting, the style always served as the vehicle for the narrative. Michael Curtiz effectively implemented his philosophy as “the anti-auteur” (Turan) with his “unerring instinct for story and an unstoppable drive to throw himself completely into the telling” (Turan).

As we have learned, the narrative is the backbone of a great film but the screenplay is the basis for a great narrative. The screenplay of Casablanca (which won the 1944 Academy Award for Best Screenplay) is an element that most definitely adds to its stature as a timeless classic. Examine the iconic lines: “Here’s looking at you, kid”, “Of all the gin joints in all the towns, in all the world, she walks into mine”, “You’ll regret it. Maybe not today. Maybe not tomorrow, but soon and for the rest of your life”, “Round up the usual suspects”, and “I think this is the beginning of a beautiful friendship”. These lines have become so ensconced in the popular culture nomenclature that many people do not even recognize the fact that they’re origins lay in a movie filmed in 1942. Consider also the film’s unmistakable theme song “As time goes by”. Recorded and performed by Dooley Wilson for the film, the song was actually written for the 1931 Broadway musical Everybody’s Welcome by Herman Hupfeld. The song has become more and more popular as time goes by, becoming a timeless classic in its own right. The fact that “As time goes by” is one of the most popular standards of all time, recorded by artists ranging from Francis Albert Sinatra to ZZ Top, and will always be identifiable with Casablanca only adds to the films immortality.

Casablanca’s setting is the country of Morocco but make no mistake, Casablanca is a through and through American movie. The ultimate goal that powers the narrative of the film is not to get out of Nazi occupied Europe but to get to America. America is put on a pedestal as the personification of freedom, democracy and liberty; the land where dreams are realized and anything is possible. The central theme of America being the only answer and the savior from the horrors of war is established in the opening sequence when the narration states “Many eyes and imprisoned Europe turned hopefully, or desperately, towards the freedom of the Americas”. As an American, I was raised to believe, and still believe, that America is the greatest country in the world. Being as such, I believe that America has a certain responsibility to ensure liberty and justice for all. This is how Americans like to view themselves and these views were cemented by our actions during World War II and reinforced in Casablanca. In a sense, Casablanca served to impact our “perception of intervention in the Second World War, and of intervention in foreign affairs in general” (Levy). As America entered the global fray, the point was made that America’s role was about to change “to become the reticent guardian of the whole world” (Levy). Americans are arrogant anyway but Casablanca served as conformation to announce to the rest of the world what we already knew, that America was now the world’s premier superpower.