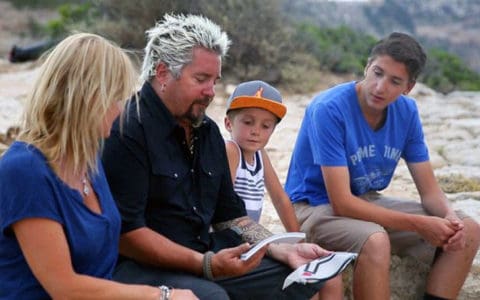 When it comes to filling Guy Fieri’s shoes, that’s no easy task. He has a personality the size of a house, and there’s that hair to contend with. He has famous rivalries, and he also has a famously big heart and does charity work when his community is in need. Unfortunately, he’s also famously hated and controversial. The question of who could take on his bowling shirted mantle is a big one. Of course, we’re not looking to replace him per se, but it never hurts to have a backup plan in place for when he eventually retires.

We’ll be listing celebrities who might just be able to do a fair job as the next Guy Fieri by looking at his most iconic traits. We want someone who has most of the same qualities. Here’s what we’ll look at: Can they cook? Are they willing to rock a bleach blond hairdo? How would they look in a bowling shirt? Do they have a rival? Lastly, are they controversial? Everyone who made the cut has at least a few of these traits, so they aren’t in any particular order.

He’s not a chef, and to be honest we aren’t even sure if he knows how to cook. However, when it comes to being controversial and rocking a bowling shirt, he’s the obvious choice. We loved his “Charlie Sheen’s Winning Recipes,” segment on Funny or Die, and we could probably watch him garnish a whole lot of plates with his secret ingredient.

We aren’t sure about the bowling shirt and bleached hair, but we just can’t get enough of him. Snoop can cook, he’s funny, and we know he’s controversial enough for the role. Though he doesn’t have the high energy style of Fieri, we still think he could be a fun replacement. With his sense of humor and his friend Martha Stewart, we’re betting there’s not a lot he couldn’t do so he makes the list.

While we’re on the subject of stars who have cooked with Martha Stewart, Lindsay Lohan has made a couple of appearances on cooking shows. In addition to Martha, she made garlic shrimp with Rachel Ray and frequently shows off her kitchen skills. She’s not quite bleached blonde, but she sure is controversial. We think she might surprise us if we gave her a chance.

He has the controversy down pat after last years debacle and he’s not afraid to threaten the press openly, so he’s going to stay controversial. What’s more, he sports a bleach blond look in Fantastic Beasts. We aren’t sure about his cooking skills, but we know he’s willing to try if Benny and Joon had it right. Though we’re afraid his Puerco pibil might be long-Puerco pibil, it should be evident that any cooking show with Mr. Depp on it would be a worthy watch.

Alright, here we have another seriously controversial bleach blonde who loves to cook.  She has a rival in Cardi B, so she can rock that Fieri-esque aspect as well. Energetic and full of attitude, oh yes, that she is, so basically if the shoe fits, we think she could wear it. Though it’s not terribly likely, she’d put on a bowling shirt, and we can forgive her for that along with the fact that the background music on her show would be a very different feel from anything Guy does.

We know she needs a job after last year’s sitcom canceling fiasco. Though we do not support her brand of weird racist and narrow-minded nonsense, she might still make a fair Guy Fieri impression. With her blonde hair and experience as a cooking show host, albeit only as a joke, we know she could be an option. Furthermore, we think she’d do alright in a bowling shirt. Hopefully, she can get some help for her issues and find a new path. She wouldn’t be the first TV show host to make questionable remarks, so her show might not last, but we bet she knows a great recipe for macadamia nut cookies.

We know this star is willing to dress down, so we doubt he’d object to the bowling shirt, and he’s blonde already, so it’s a start. Chris Pratt is also hugely controversial, and he likes to cook. though mostly only omelets, fajitas, and meat. Part of what makes him so controversial is the cooking since he prefers to cook animals he’s killed himself. Other than being way too laid back and limited in his cooking repertoire we think he’d make a passable Fieri stand-in, though it would be a shame to bleach that hair.

She makes a mean cheesecake, and as a Kardashian/Jenner sister you know she’s got controversy and plenty of drama to bring to the table. Khloe also recently went blonde. Unfortunately, we’re afraid that there’s little to no chance we’ll ever see her in a bowling shirt unless Vera Wang or Gucci makes it. It could be a lot of fun to let this slightly-less famous Kardashian have a shot at building a cooking empire.

This famous blonde Youtuber is more of a beauty and style blogger, but she does travel pieces as well and might make a decent host for a show more like Diners Drive-ins and Dives. After a famous and ongoing feud with a hotel called the Moose Cafe, she surely has a rival. We know she can bake Christmas cookies with her sister, but beyond that, it’s questionable as to whether or not she’d be very good in a kitchen. She has all the high energy she could ever need, however, and we think this internet sensation might make a good food network star. We now it’s a cheat to pick someone who isn’t on traditional TV, but streaming services like Youtube and Amazon Prime are the future of TV, so we’re ahead of our time.

We now this blonde bombshell can rock a bleached ‘do and we’re pretty sure that she’d look great in anything including a bowling shirt so she’s already ahead of the game. It gets even better though because rumor has it that she’s getting her own cooking show. Sure, she’s not a guy by any means, but we’re pretty sure she’s got enough edge to rock her way into the celebrity chef game and maybe someday take on Fieri himself in one of those oh-so-famous food network battles. She has everything it takes except the animosity of other chefs. It’s ok, great rivalries don’t happen overnight.

We genuinely hope Guy Fieri continues his infamous trademark cooking on tv for many years to come. Whether you love him or hate him, there’s no denying the appeal. We look forward to his shows every week, and we’re looking forward to tasting his chicken as well when the restaurant chain finally gets off the ground. In the meantime, at least we know there are a few folks out there who could put on a good show in his absence.