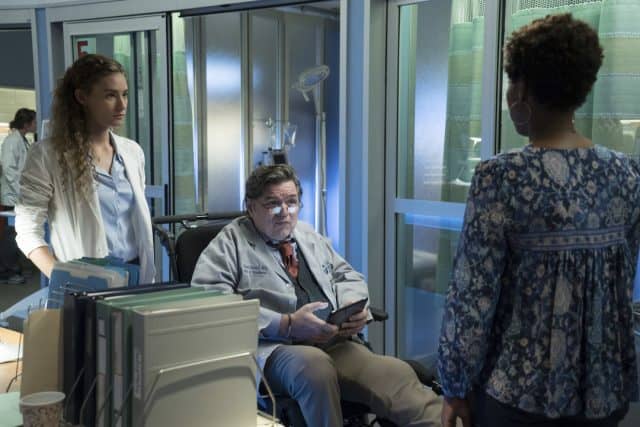 Chicago Med returns for its second season with a fresh starts for the doctors and the nurses at the hospital. The theme of the hour is new positions. Almost everyone on staff has a new role to play; professional, personal, or both. There’s a certain magic, happy bubble that comes with the newness of change. There’s also the crashing weight when reality pops that bubble.

Dr. Choi is the ER’s new Chief Resident. Now Dr. Choi is more than qualified for the job, but he forgot the number one rule of a new job. There’s always a learning curve, so never go in thinking you’re going to do better than the previous job holder. Thinking that a blackberry made a better organizer than a physical schedule was his first mistake. His second mistake was not taking advantage of the nurse’s knowledge. Live and learn.

Dr. Rhodes begins his new fellowship in cardiothoracic surgery. He goes in optimistic, but his new boss is not nearly as welcoming as his former mentor. In fact, Dr. Lathum says outright that Rhodes wasn’t his pick for the fellowship. Even more troubling is Latham’s downright hostile attitude towards Rhodes. His outburst is anything but professional, but in the little moments we see his skill at dealing with patients and residents. Hopefully his relationship with Dr. Rhodes improves.

Sharon Goodwin and April have personal troubles to contend with. Goodwin now has to live life alone after her husband leaves her. As we have not yet met the soon-to-be ex-Mr. Goodwin, this will presumably be a long arc for Goodwin this season. April is petrified that she is going to pass on Tuberculosis to Tate and his son. It takes seeing the bond between an HIV-positive patient and his wife to change her perspective. Besides, who is going to be more careful about a potentially contagious illness than someone who works in medicine?

Reese is far away from the hospital. After losing her position at Med, she now makes her living as a barista. Thank goodness Dr. Charles comes to the rescue! He offers Reese a fellowship on his service. Through initially hesitant, Reese is very capable on her first day. Practically she is able to help Dr. Charles put-put around the hospital in his wheelchair while he recovers from a little accident. Dr. Charles likes to let people open up on their own time, and he’s teaching Reese to handle patients the same way. Reese is intuitive about her first patient, a teenager under pressure to be perfect who tries to kill herself over what she thinks is psoriasis. For all those who like to self-diagnose, it was just a yeast infection. Not to mention curing the physical ailment alone is not what psychiatry is about. Baby steps.

The only people who are actually pretty settled at the moment are Natalie and Halstead. Personally and professionally they’re in the places they want to be; or at least they think so. Halstead still has to deal with the fallout from last year’s malpractice suit. His insurance is going to take a big hit. He also has some jealousy to work through over Natalie’s potential suitor Jeff. Natalie is at the top of her game. She helps transport a pregnant mother and deliver the baby all in one day. Then everyone witnesses the miracle of a dead man coming back to life just to see his new granddaughter. Natalie realizes that she may need to loosen up a bit in her personal life, which leads her to Jeff.

Whose new arc are you most looking forward to?

The Season 2 Premiere of Chicago Med set the stage for everyone’s new professional and personal arcs.