Home
Chuck
Chuck 4.06 “Chuck Versus The Aisle of Terror” Review 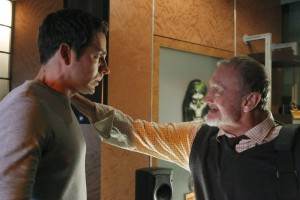 I normally hate themed episodes of TV shows. All too often, they come off as forced, like “the network made us do it and we don’t really know what to do.” The result usually ends up being among the worst of a series. Thankfully, Chuck defies that history.

Two weeks ago, the evil Dr. Wheelright (perfectly played by Robert Englund) is celebrating the success of his toxin with none other than Chuck’s mother Mary Elizabeth, who subsequently calls him up and asks for a meeting alone. No, that’s not ominous at all. Chuck and Sarah meet Chuck’s mom, the latter at gunpoint. “Please don’t kill each other,” Chuck pleads.

Mama Bartowski claims that she’s been deep uncover, tells them about the toxin, and asks for their help in stopping Wheelright. She needs Chuck to pose as his buyer so the toxin gets to the CIA and not into the hands of anyone evil. Chuck takes this information to the rest of Team Bartowski at Castle (surprisingly, Casey thinks Morgan might actually be of some use, as long as he keeps his mouth shut) and sells them on his mother’s plan. Feeling overwhelmed, Morgan delegates the task of building the Buy More’s haunted house to Jeff and Lester, who predictably go way over the top in creating the “Aisle of Terror.” Of course, their idea of scary is the elderly, so “terror” is subjective.

Chuck meets with Wheelright at a local restaurant, while the rest of Team Bartowski looks on. His mother arrives unannounced and announces that he’s a CIA spy, before shooting him (and shooting up the place). At least Chuck was wearing a bulletproof vest. She gives him more mother issues by threatening him at gunpoint in order to get him into her car, explaining the whole thing was for his own good, and then bailing again just before Sarah and Casey arrive to get him and capture Wheelright. She will never win any parenting awards.

Wheelright decides to activate his toxin-carrying device inside Castle, exposing himself and Chuck. What follows is a sequence full of some truly creepy special effects as Chuck gets tormented by all sorts of scary things and some weird special effects besides. They end up inside the “Aisle of Terror,” where it turns out that old people and black licorice do scare the evil scientist. Who’d have thought?

Morgan and Casey are meeting with one of Casey’s sources to check out Mama Bartowski’s story. (I should not be giggling at Morgan’s line “bring me here and use me as a human target,” but the Christopher Chance fangirl in me is.) Casey is surprised to learn that Mama Bartowski is a rogue agent, and he passes that information on to Sarah. However, it’s too late as a naive Chuck has brought Ellie to meet his mother. He’s forced to watch as Sarah and a spy team take her into custody right in front of him. It’s heartwrenching to see him have to tell Ellie that their mother won’t be turning up, again. Just when you think you know this show, it throws you a curveball.

For another perspective, you can check out Michael Salerno’s recap here. Until next week, when we get to tango with Timothy Dalton, I’m out to brush up on my own spy skills.