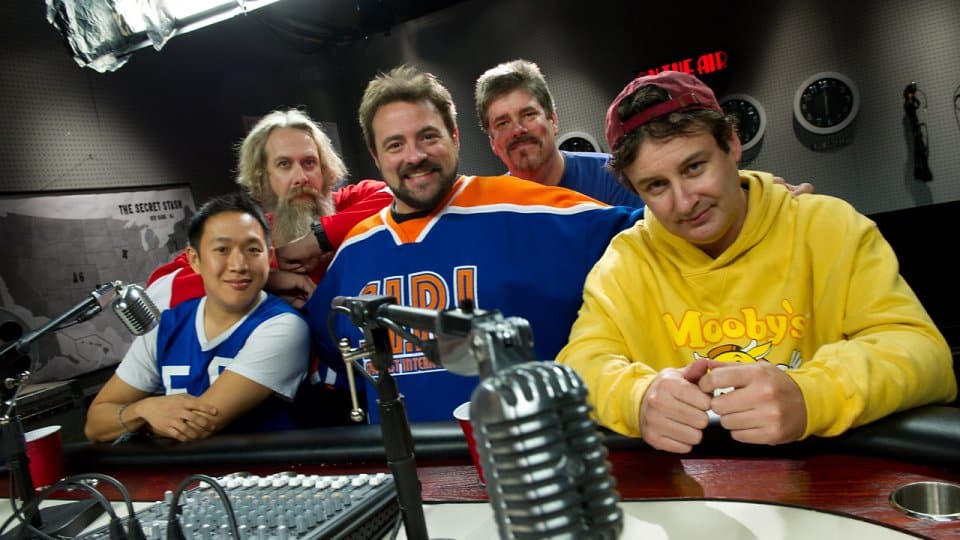 I love comic books. I mean — and let me be absolutely clear about this — I absolutely ADORE comic books. Since I was four years old and my mother got me my first copy of a Gold Key Winnie the Pooh comic, I’ve been hopelessly enthralled with that four colored medium. They were my best friends as my parents went through a nasty divorce, they were my friendly teachers that taught me how to read and as I grew older their unique voices and imaginative storylines expanded my view of the world and all that surrounded me. When I was in my twenties I even worked in a comic book store for a short time. So my credentials with the world of comics is solid and not just some fly by night type of thing brought about by the latest glut of comic book films which flood the local multiplex.

The above being put out there as a sort of disclaimer, I can now say that it was with very little hesitation that I began watching executive producer Kevin Smith’s AMC reality series, “Comic Book Men.” What could be better to a self-professed comic book geek than a weekly show that follows a group of comic book shop employees as they acquire some nifty comics for their shop and meet with a variety of comic book creators? Plus, I’m a huge fan of some of Smith’s film work, so it seemed to be a win-win for this fanboy.

The show is set in the town of Red Bank, New Jersey where writer-director-actor and executive producer Kevin Smith (“Clerks”, “Chasing Amy”, “Dogma”) owns a comic book shop called Jay and Silent Bob’s Secret Stash. Within the comic packed walls of this establishment we meet four gentlemen, three who work there and one who just sort of hangs out and makes with pithy comments and wry observations (very much in the vein of one of Smith’s best works, “Clerks”). It’s this cast of characters — Walt, Bryan, Ming and Mike — that takes viewers by the hands and leads them down the sometimes downright strange world of comic book culture.

The shows real strength is when it focuses on the day to day business of running a comic book shop and the conversations this motley crew of comic aficionados engages in. Just what would you do if you found out your parents or girlfriend was a robot? Who could win in a fight between Mighty Mouse and Superman? It’s also fun to see some of the comic books that make their way into the store, both rare and unusual. A lot of this rings true to this one-time comic book shop worker and it is one of the real highlights of Comic Book Men.

Another interesting facet of the show is that there is a revolving door of comic book industry professionals that show up for occasional episodes. John Romita, Jr., Stan Lee, Jim Lee and Neal Adams are comic book royalty and it’s nice to see talent that is oftentimes regulated to anonymity given some airtime.

For the many fun aspects to the show, there are a couple of points that could use some tinkering by Smith and AMC. For example, sometimes the show seems to border a little too much on the abysmal TV “reality” show, “Pawn Stars.”Â  The fun of the show seems almost diluted during awkward moments of wheeling and dealing with customers who come into the “Stash” to try and cash in their treasures. Most, if not all, of these painful over the counter moments are obviously planned out in advance, although they are depicted as random moments during the course of a business day that happen to be caught on film.

And that’s a perfect segue way to the next point: For a so-called “reality” show, there is a heck of a lot of unabashed contrivance that goes into every episode. The four central characters focused on in the series seem to be just that: “Characters” that are shaped and molded for a primetime audience. Expeditions by the principals of the show to a western styled theme park, a wedding at the shop, zombie marathons and “surprise” stop-ins by one of Smith’s regular stock players in his films, Jason Mewes (who winds up running the register at the shop in one episode…Hijinks ensue, naturally) really stretches the charming premise of what the show SHOULD be about: Four men in the throes of a wonderful arrested development and their love of the comic book medium. Let the cameras film that. The episodes might not be quite as frequent and the interludes between interesting events more prolonged, but it might just paint a more charming portrait of the American comic book shop and the popular culture that surrounds such a thing.