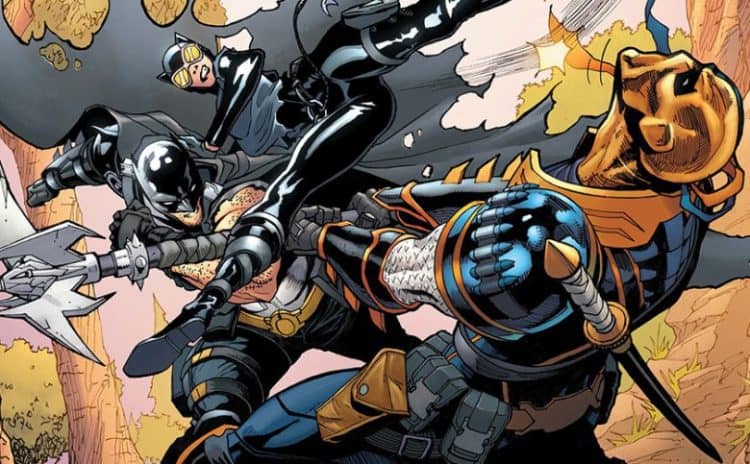 Like I said earlier, we open up Batman/Fortnite: Zero Point #4 with Deathstroke holding Catwoman hostage, as he demands that Batman drops his weapon. Obviously, Batman doesn’t remember who Catwoman is, so he has no personal connection to her, however, he has an emotional connection and somehow feels the need to keep her safe and prevent her from being put in harm’s way, so he obliges Deathstroke and puts his weapon down. He then receives a hand signal from Catwoman, although he cannot explain it, he does know exactly what it means and the pair end up taking Deathstroke on two against one. Deathstroke then reveals that he is not their enemy and gives up his sword, surrendering to the dynamic duo. According to Deathstroke, people that come out of the loop tend to come out pretty hostile, and then all of the memories of every single Loop that they had previously been a part of come flooding back into Batman’s head. After a short argument between Batman and Deathstroke, it’s revealed that there are more survivors from the Loop.

The Gang’s All Here

It turns out that there’s a whole group of survivors that have been stuck on the island – some for years – and have had no success in getting off of it. Some threats are thrown around, but eventually everyone finds a way to start “trusting” each other and working together to find a way off the island. According to Raider, one of the longest surviving members, there is one known way of getting off the island by attempting to find the other side, but this ends up leading to a horrible death. She also claims that there have been “events” that happen sometimes, including a device that was clearly made by intelligent beings with plenty of resources. The group bands together as Batman takes charge in ordering everyone around – classic Batman – as Bandoleer questions why they’re listening to him. Batman shoots her a sharp glare, to which Deathstroke replies “Good enough for me,” which seems to be the general consensus across the rest of the group. Batman and Catwoman go off on their own, where it’s discovered that Batman faked his disorientation when his memories came back, because he wanted to talk to Catwoman. The team regroups yet again and Batman figures out that they need to find some way to enter the hatches that have never been opened.

Somehow, Batman has some piece of tech that will provide the exact information they need to open up the hatches, and gets one open almost immediately. As soon as they open the hatch, there’s a massive rock monster there to block their way. They aim for the runes on the monster’s body, and take it down with relative ease. Eventually, they come across four different pathways, and Batman suggests that they split up into four teams of two to cover as much ground as quickly as possible. Of course, he takes a path with Catwoman. The two are on their way back when Batman hears a noise, which turns out to be a mortally injured Fishstick, who found a strange device and was on his way to bring it to you when he was attacked. As Fishstick dies, they both come to the conclusion that someone is lying and that they were never in the loop, so someone must be working for “them.”

While we only saw Fishstick for a little less than a single issue, it still hurts to know that he died such a gruesome death. Fishstick didn’t deserve that. All we can hope for is that Batman avenges him in the next issue and takes revenge for Fishstick. Maybe he could take him to the Lazarus Pit and revive him? On second though, that’s probably a bad idea….