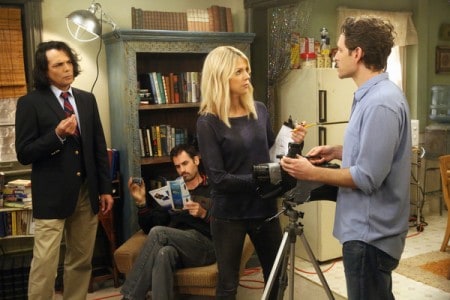 Last night’s episode of It’s Always Sunny in Philadelphia was the first real dud of the season. After three brilliant episodes though, they’re allowed to have one that doesn’t quite hit the mark. Their goal for this episode seemed to be to make a statement about art and what qualified as good art. While there were undeniably some laughs in the episode, overall it just fell flat. Perhaps it’s the fact that the episode never really seemed to go anywhere or that some of the gags never paid off, but the episode seemed to be missing the ingredient that makes most episodes of It’s Always Sunny so entertaining.

The episode was set around the fact that Dee had somehow managed to land a small part in an actual movie, one that she considered artistic. When she showed it to the gang, however, it quickly became clear that the movie was more smut than it was art. One of the funnier moments in the episode came from watching her film debut, as the main characters in the film started having sex and she kept attempting to get screen time, popping up in the background. It was clear to the gang though that this film was no piece of art and in true fashion, they immediately began to mock her. This did pose the question to them though, of what exactly qualifies as art, a question that everyone would work to answer throughout the episode.

For Mac, this meant going to an art gallery armed with one of Charlie’s childish drawings and trying to prove that anything could be considered art. But when the owner of the art gallery told him that you need to have experienced some kind of hardship for your art to have meaning, Mac set out on a different path. Despite thinking that Charlie had one of the worst lives possible, he couldn’t convince the gallery owner of this, because Charlie was too busy doing a Grieco impersonation. Instead, Mac turned to Cricket to inspire Charlie’s drawings, leading to a lot of depressingly funny stories from Cricket. In the end, even Frank couldn’t use his money to convince the gallery owner that any of Charlie’s pictures were actually art, as she claimed that art only has the value that someone would be willing to put into it. And for her, that was none.

The whole gag of Charlie dressing up as and impersonating Richard Grieco came from the fact that Grieco had stared in the film Dee was a part of. Charlie apparently wanted to be as cool as Greico and took on that persona. While Charlie Day can manage to make anything funny, there didn’t seem to be any real point to this and honestly, it didn’t provide as many laughs as Day usually brings to the show. It’s likely that Charlie’s humor that comes from just being himself is what this episode was missing the most. Although his chalk eating and ridiculous drawings were some bright spots in his storyline, it overall didn’t amount to anything nearly as fun as what Charlie usually brings to the table. There was really no payoff to the gag either, with nothing amounting from it, leaving me questioning why they even bothered with it.

Frank, on the other hand, carried most of the comedy of the episode, which is surprising because his humor doesn’t usually click with me. The art buyer persona that he took on in an attempt to get the gallery owner on board with Charlie’s drawings was quite over-the-top but not necessarily in a bad way. His connection with one particular piece of art combined his claim that the air conditioner was the best piece of art in the gallery, were some of the high points of the episode. He may have completely failed at convincing the gallery owner, who it turned out only rented the gallery with her parents money, but if anyone’s arc in this episode went somewhere, it was Frank’s.

Dennis and Dee took another path in their exploration for discovering what art is, one that led them to making their own smut film. Dennis’ erotic stories that he had written based on his own experiences came into play again, as he set out to make a film based off of them. When he brought the idea to someone who could help him make the film, she only bought into it when he untruthfully told her that Dee had written the stories and that she would be directing. He was forced to go to her for help, the directing position one that she immediately agreed to. Her directing style was a lot of fun and Dennis’ stories were entertaining (especially the running gag about him sleeping with the fifty year old librarian at his high school), but what hurt this plotline is that it never went anywhere.

Throughout the whole episode, I kept expecting there to be some kind of big payoff to the multiple storylines, but nothing ever really happened. Dennis concluded in the end that maybe the only value art has is the value people put on it and for art to be considered good, people simply need to think it’s good. The whole point of the episode might have been to prove that art is completely subjective and really has no meaning outside what we give it. While this is an interesting premise and perhaps there never was supposed to be any payoff, I still think it could have been executed better. Compared to so much television that’s airing right now, this still would be considered a solid episode but judging it by It’s Always Sunny standards, it fell flat.