Home
Comics
Did You Know Tony Montana Survived in a Scarface Comic Series? 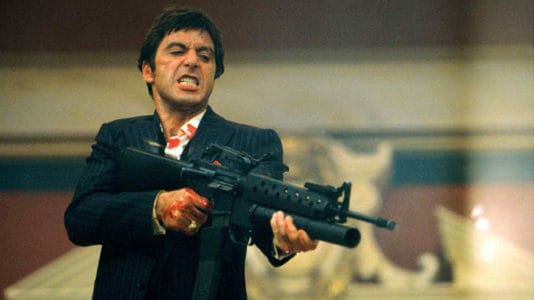 Only in the comics could this ever, EVER work. Those of us that have watched the movie Scarface with Al Pacino, and there are a lot of us to be certain, saw the infamous gangster and drug peddler get shot at point-blank range in the back and finally ended in the movie. In the comics however someone wasn’t quite done with him since apparently the story goes that Tony’s body was so doped up that it forgot to die at one point, which allowed doctors to bring him back after losing him twice on the operating table and removing at least two feet of intestine. And if that didn’t sound bad enough, this isn’t a story where the bad guy, antihero, whatever you want to call him, sees the error of his ways and tries to get out of the life. If that’s what you were thinking then you might not have watched the movie in its entirety. This is Tony Montana after all, the scourge of Miami and, as the folks at Screenrant would likely agree, the one guy that you don’t leave alive unless you’re ready to enter into a vendetta that’s only bound to end with him or his enemies lying on a slab. The way the story goes is kind of amusing really since one can imagine that he’s out for vengeance in a massive way and Sosa is his biggest target considering that Sosa is the guy that sent the hit squad after Tony following the botched assassination that Tony wouldn’t be a part of.

Obviously those of us that watched the movie are of the mind that Tony couldn’t have possibly survived such a hailstorm of bullets, and in fact he shouldn’t have been able to keep fighting with the amount of lead he was carrying in his body and the damage that he’d already taken. To think that a shotgun blast was the tipping point is kind of comical in a sick, morbid kind of way since it indicates that Tony’s coked-out mind finally recognized that his body had taken a massive assault that it couldn’t shrug off in its numbed state. But in the comics he was taken to the hospital, worked on until he came back to life, and then recruited by the DEA to be their informant. Well, one can only guess how that might have gone since Tony is no one’s stool pigeon, and he eventually began to assert himself in the drug game once again, scratching his way back to prominence as he kept his sights on having it all once again. Obviously this would attract the attention of Sosa once again though, and it’s fair to state that Tony would easily be up for round two, even if it meant that he would have to confront Elvira again, who went and married Sosa no less. Apparently Vi just couldn’t leave the life either, though her tale is a bit sadder than Tony’s since Montana never wanted to leave the life in the first place.

Murder, mayhem, and mountains of cocaine were a big part of Tony’s quest to find Sosa once again, only this time his goal was to put Sosa down, not just out. Of course being that Tony isn’t exactly the best planner or even the most skilled assassin without a crew, it was fair to say that things were going to get out of control quickly and without any means of being brought back to center considering that he had no intention of doing such a thing. It can’t be said enough, this is TONY MONTANA, he doesn’t do small time or even moderately quiet, and when he’s ready to go, it’s time to go, no matter how bloody it’s going to get. The idea that someone made a comic book based on this psycho, and he is psychotic, don’t get it twisted, is hardly surprising since by the end of the movie a lot of people were probably pulling for Tony to make an escape or a stand or something. But the point is that Montana is a stone-cold killer despite his reservations about killing women and children, and the kind of war he could have brought to Sosa had he been organized might have been quite the thing to see. On the big screen it would have been insane without a doubt, but in the comics it’s something else to really witness since knowing Tony as a lot of us do at this point, there was never any chance that he was going to go out of this world quietly, or without having his say at one point. It’s still a lot to process trying to see how his body would allow him to keep going after taking enough bullets to kill a small squadron of fighters.