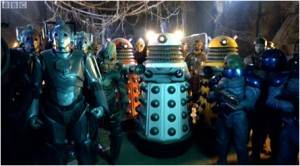 Doctor Who‘s fifth series has been undoubtedly the best series of the show since its 2005 revival. Matt Smith has been one of the best Doctors yet (I daresay he’s topped Tennant’s stunning portrayal), and Karen Gillan’s Amy Pond has been one of the best companions yet. That’s all thanks to Steven Moffat, who took over the reins of the series from Russell T Davies at the beginning of this year. Davies was a good writer in his own right, but his plots often became convoluted and his stories needlessly epic. Moffat, however, has learned from his predecessor’s mistakes and created the first truly brilliant series of the show.

One complaint often directed against Davies referred to his overblown finales, which had hugely proportioned stakes and usually came out of nowhere (save for the easter eggs such as “Bad Wolf” and “Vote Saxon”). The first part of Moffat’s first finale, “The Pandorica Opens,” maintains the bigger stakes, but without the huge amounts of drama. There are no longer people crowding the streets of London and screaming at the disaster. That seems to have been done away with. Now, there is just the Doctor, his companions, and his enemies. The stakes remain terribly high, but we don’t have it rubbed in our faces by hundreds of screaming Briton extras.

Moffat also improved on Davies’ foreshadowing skills. While, as mentioned before, Davies simply used easter eggs to hint at the series finale, Moffat truly turned the series into one large story with the “cracks in time” subplot, which pervaded through almost every episode (save for “Amy’s Choice” and “Vincent and the Doctor”). This made “The Pandorica Opens” feel like resolution, and not an entirely new story, making the viewer truly invest in the episode because they’d invested in the season.

Of course, “The Pandorica Opens” was the first part of a two-part finale, so it was much more conflict than resolution. However, questions raised throughout the series were answered. The Pandorica’s purpose was revealed, and while I had been able to guess what it was from spoilers, that didn’t make the revelation any less heartbreaking.

I also have to really stand up and applaud Moffat’s use of villains in this episode. As promotional photos from the episode had long betrayed, there was a Rogue’s Gallery of baddies in “The Pandorica Opens,” all having gathered to stop the Doctor. There were the new Daleks, the Cybermen, the Sontarans — all of the Doctor’s greatest enemies (save the Weeping Angels, who were thankfully absent due to the “too much of a good thing” rule) gathered there, under Stonehenge. And the best part of it all? Their motives are completely pure. “We will save the universe — from you!” cries one of the Sontarans, and you totally feel for them — not because they’re right, because they’re very, very, wrong — but because they actually have good intentions. They’re not all bad — just misguided. And nothing brings out the good in someone like the threat of a destroyed universe (except for the other Time Lords — they proved in “The End of Time” that a destroyed universe is exactly what they want).

This episode marked the return of Rory (as well as some other characters from this year), and his plotline was the only one that I’m actually worried about. Doctor Who is family show; the universe will eventually be saved, and the Doctor and Amy will survive. But Rory’s fate is very much up in the air, and I’m afraid that his very welcome return to the show will be brief, and that a tearful goodbye will be coming soon. After all, it’s not really Rory, is it?

Overall, though, “The Pandorica Opens” is a wonderful set-up that, if finished well by “The Big Bang,” next Saturday, may very well be one of Doctor Who‘s best episodes ever. And, when you look at the stellar rest of the season, that’s sort of a fitting ending. A+