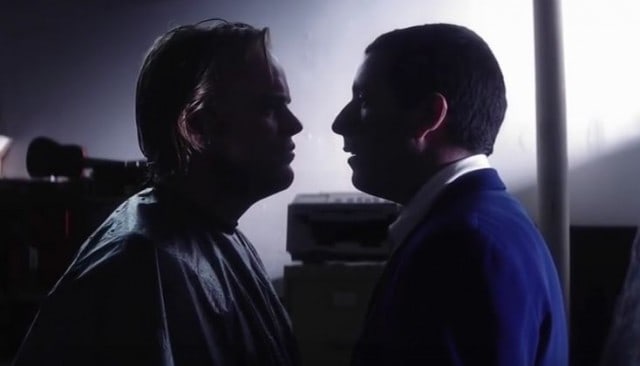 Every so often, a comic actor goes through a crisis of faith. Maybe they feel they’re being pigeonholed into roles that involve fart jokes and being hit in the head too often, or maybe they just want to see what else they’re capable of. Sometimes this can be a train wreck, but for these eight actors, it’s gone pretty well at least once.

Why P.T. Anderson chose Happy Gilmore to star in one of his films, I have no idea, but it turned out pretty great. As an emotionally stunted businessman in Punch Drunk Love, Adam Sandler made us forget all about his goofy past, at least for two hours. Sandler also tried to be more serious in films like Spanglish (ugh) and Reign Over Me (ugh to a slightly lesser extent), but Punch Drunk so far has been his dramatic tour de force. Now what’s he doing? Bedtime Stories and weird Netflix movies.

Bill Murray has had wild swings back and forth between outrageous goofyball and serious actor. He’s ventured into drama a few times, with Broken Flowers, Ed Wood, and most notably Lost in Translation, where he played a rich lonely actor who bonds with Scarlett Johansson in Tokyo, which scored him a Best Actor nom at the Oscars. Only a few other comedians can say the same.

For someone whose career started so long ago, I’m still pretty impressed that Steve Martin is able to sell himself as a leading comedic man to this very day. His brief dip into drama was in Shopgirl, which was adapted from a novel that he himself wrote. Not bad. It was generally thought of as an art house movie, but most thought his performance as a bored businessman was right on.

Bill Murray’s Ghostbusters counterpart also scored a big Oscar nom for his supporting role in Driving Miss Daisy. He took other stabs at drama, but they ended up being in unfortunate places such as Pearl Harbor, so Miss Daisy will probably be his most memorable straight role. That’s all well and good, but I’d rather see him crossing streams or dancing the blues than trying to act all serious.

Probably the most over-the-top comic on this roster, Jim Carrey has had varying degrees of success trying to play it serious. He failed horribly in The Majestic, was great in Eternal Sunshine (if you consider that a drama, I don’t), but above all else he was spot on in The Truman Show, where he played a hapless worldwide celebrity quite literally trapped in a bubble.