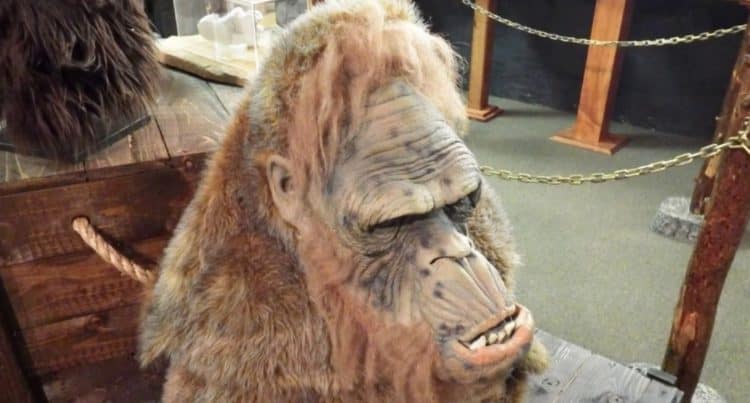 Expedition Bigfoot is a new show that has started up on the Travel Channel. Like its name states, it is focused on the search for the cryptid called Bigfoot, which is described as a huge, hair-covered ape that can walk upright. The marketing speaks about potentially solving the mystery once and for all, but considering that the news hasn’t exploded about the finding of either Bigfoot or something that could be the basis of Bigfoot, it seems pretty safe to say that this is nothing but hype. Still, the show can still entertain those with an interest of some kind in cryptids. Here are 10 things that you may or may not have known about Expedition Bigfoot:

The show is set in North America. This is unsurprising because Bigfoot is a North American cryptid, though there are those who like to claim a connection with other cryptids from other parts of the world. In fact, a third of Bigfoot sightings come from the Pacific Northwest, while the remaining two thirds come from various places throughout the rest of the continent. On top of this, limiting the filming to North America makes for lower travel costs, which presumably played a part in the relevant considerations as well.

2. Focused on a Very Popular Cryptid

Bigfoot is a very, very popular cryptid. In fact, one could make the argument that it is one of the first examples of pseudoscience receiving widespread popularization in American culture, having been helped along by the debates over its existence that have been happening for decades and decades. Amusingly, this has produced the result that more Americans believe in BigfootÂ than in the Big Bang Theory.

3. Multiple Potential Explanations For the Cryptid

Of course, there are a number of potential explanations for what Bigfoot sightings might be. The titular expedition of the show is focused on Bigfoot being an previously unconfirmed species of ape that live in North America. This isn’t wholly impossible, seeing as how there are still enormous stretches of wilderness in the Pacific Northwest and the rest of North America. However, it is important to remember that the potential for Bigfoot to exist isn’t the same as saying that there is evidence of Bigfoot existing.

4. Hoaxes Are One Potential Explanation

One of the potential explanations for Bigfoot sightings is hoaxes. In short, there is enormous interest in Bigfoot, meaning that there is a fair amount of money that can be made by unscrupulous individuals who are willing to exploit that interest. Moreover, there are also people who have been known to dress up as Bigfoot for the purpose of pranking others, though there is at least one case that ended badly when the prankster was struck by a couple of passing cars.

5. Misidentification Is One Potential Explanation

Another potential explanation for Bigfoot sightings is misidentification. Basically, most Bigfoot sightings consist of footprints, tuffs of hair, and not particularly good photographs, which make it very easy to mistake one creature for another. For example, some footprint casts have claw marks, which suggest that they came from bears because bears have five toes with claws on them. Likewise, the FBI tested some potential Bigfoot hairs in the 1970s, which turned out to have come from deer. Misidentification is a particularly common problem because a fair amount of identification is carried out by people who may or may not have the relevant expertise and experience. Never mind potential bias.

6. Previously Unconfirmed Species of Ape Is One Potential Explanation

With that said, it is also possible that Bigfoot sightings can be explained by the presence of a previously unconfirmed species of ape that makes its home in North America. There are a lot of Bigfoot enthusiasts who like to talk about Bigfoot being surviving populations of known species such as Gigantopithecus. However, there tends to be a lot of problems with this kind of speculation, with an excellent example being how Gigantopithecus fossils have never been found in either one of the Americas.

7. Sees the Involvement of Bryce Johnson

One of the people involved with Expedition Bigfoot is a man named Bryce Johnson. In short, Johnson is an actor who happens to be very, very interested in Bigfoot, so much so that he hosts a podcast centered on Bigfoot and Bigfoot-related topics.

Another one of the people involved with the show is Dr. Mireya Mayor, a very well-known primatologist. For the most part, she is known to interested individuals because of her role as a wildlife correspondent, with the result that she has reported much on the loss of habitats while also supporting various solutions to said problem. However, it should also be mentioned that Dr. Mayor has the credit for discovering a new species of mouse lemur in Madagascar, which is no small achievement.

9. Sees the Involvement of Russell Accord

Moving on, there is Russell Accord, who is another Bigfoot enthusiast. In his case, he is famous for being a veteran who now puts his survival skills to use in searching for Bigfoot throughout the Pacific Northwest. It is no exaggeration to say that Accord has accrued a great deal of experience in this particular matter, seeing as how he has been conducting regular searches for Bigfoot since the 1970s.

10. Sees the Involvement of Ronny LeBlanc and Ryan Golembeske

There are two more participants worth mentioning. One would be Ronny LeBlanc, someone who isn’t just interested in Bigfoot but also other cryptids as well as other paranormal subjects. As a result, LeBlanc has become rather prominent in said scene, with the result that interested individuals might recognize him because of his participation in paranormal events as well as paranormal programs. The other would be Ryan Golembeske, who got his interest in Bigfoot from his upbringing in a family that was dedicated to the search for Bigfoot plus various other cryptids. As such, Golembeske has visited a wide range of places in search of a wide range of cryptids, with Bigfoot being just one of them.