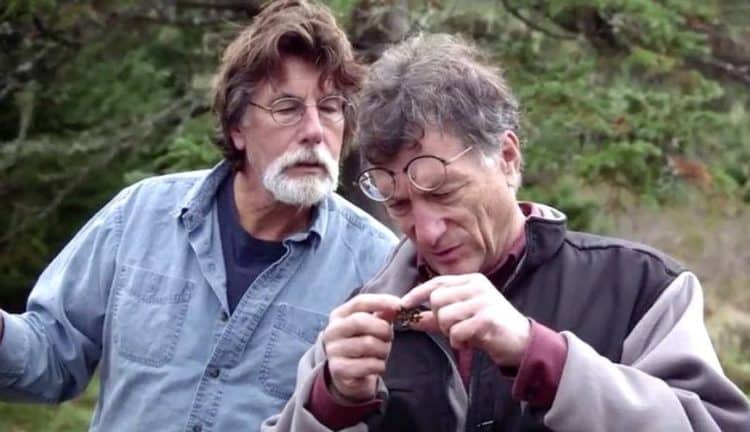 Over two centuries of searching, the mysteries of Oak Island have yet to be solved. The task of uncovering history has been difficult and costly. Marty has become 70% convinced that something extraordinary happened on Oak Island. His goal this season is do ten times more work and have even more success. With the uncovering of the U-shaped structure at Smith’s Cove, and even more, the success has been certain.

1. The Medieval Lead Cross originated from Southern France within the area of Knights Templar influence.

Marty and Rick believe the lead cross is the most significant item found to date. Gary Drayton and Rick found it in Smith’s Cove, and the team has focused on constructing the coffer dam ever constructed on the island. It’s weather proof, waterproof, and intended to fully seal off the cove from the ocean so the area can be extensively excavated.

Rick and Craig arranged for the lead cross to be tested at the University of New Brunswick using laser abrasion. A microscopically small portion of the cross was irradiated with a laser beam to determine its exact chemical make-up. This test indicated that the lead cross is not from North America. Subsequently, the lead cross was sent to geochemist Tobias Skowronek at the German Mining Museum in Germany, which is renowned for its vast database of minerals and deposits from throughout the ancient world.

With the data gathered from the laser abrasion, Skowronek was able to tell the team where the lead originated. He compared the lead isotopes data with his database and discovered that they were related to European deposits. He found no matches with quarries that were used in the 15th through 17th centuries. He inspected further and compared them with deposits where archeologists know that Medieval mining took place and found a match which indicates that the lead cross is indeed pre-15th century.

The data from the cross is consistent with the area of two very close mountains; the CÃ©vennes and the Montagnes Noires, in Southern France, and near the Rennes-le-ChÃ¢teau which Rick visited four years ago to explore its connection to the Knights Templar. While there, modern day Knight Templar Grand Master Tobi Dobler told Rick of the belief that Knight Templar members journeyed to Scotland, and then to Oak Island with a vast treasure. Considering its association with the Templar-influenced region in France, and its lead content matching the time of the Templars from the 1300s to 1400s, the Medieval lead cross has emerged as possibly the most historic find in North America.

2. The Money Pit area was mapped using seismic scanning technology at a depth never done before.

Eagle Canada conducted the seismic scanning using strategically placed 1,500 dynamite charges, in 2-foot deep holes, which were detonated to produce high magnitude sound waves that bumped up against structures underground to map them. Because recent testing of the technology has resulted in highly accurate results, the team invited Eagle Canada to test the Halifax Tunnel area. This was the search shaft dug in 1867 located about 200 feet from the Money Pit. The Halifax Tunnel has been well-documented, and the team believed that if the Eagle Canada test was successful, then a much larger area would be tested at a cost of $1 million. The Eagle Canada team set history; scanning deeper than ever before with the Oak Island seismic scanning project.

3. The Free Masons may have used a star map to indicate significant points on Oak Island.

A new consultant, aerospace engineer Travis Taylor, was invited to consider additional ways to map the underground Money Pit area. Taylor introduced the idea that radon gas testing methods could be used. Taylor also speculated that the Free Masons may have used a massive star map to show where their important treasures were left. He used Free Masons drawings which included constellations in their drawings. The team took Travis to search for stones on the island which corresponded to Taylor’s star map.

Gary Drayton had been metal detecting at Lot 24; recently cleared of excessive underbrush, searching for artifacts. He found a ram rod used for loading muskets and early rifles from the late 1700s to early 1800s; adding to the uniform buttons and musket balls which he’d already discovered. Lot 24 continues to reveal a wealth of British army artifacts from the time of the American Revolution. Gary unearthed bone fragments, pottery shards, and a possible door latch, which he believed might indicate that the team was digging in a new historic site. He noted that if the bone fragment turned out to be human, they could provide clue to who had been on the island, considering that historic accounts showed that Portuguese, British, and French had visited the island. Archeologist Laird Niven evaluated the dig site and decided to apply for an archeological excavation permit.

5. The 90 Foot Stone may have finally been found and a second stone may mean Vikings have been there.

The team met with Laird to discuss what they hoped would be the original 1803 stone that came out of the pit. Researchers Jack, Doug, and Charles had returned to Halifax to search through the bookbindery basement once more. They found a large stone which they thought might be the original one found at the 90-foot platform. The 1901 eyewitness description of the original stone stated that the only marks on stone were letters L and N. When Laird saw the suspect stone brought into the research center, he clearly saw carved letters L and N. Rob Hyslop and Ryan Levangie of Azimuth Consulting Ltd met with the team at the research center to conduct a 3D imaging scan using terrestrial LIDAR which collected 40.5 million points of information.

The second stone was found at the Money Pit area, and it has strange runic markings. Azimuth Consulting Ltd also ran a LIDAR scan on this stone, and information about it is still pending, but it may be that the runic markings are of Scandinavian origin, which would merge with historic information about Vikings visiting the coastal areas of North America.