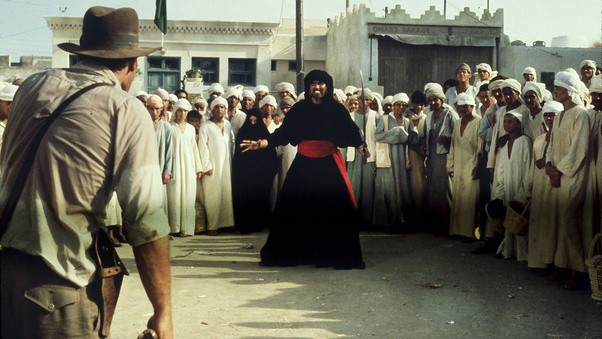 Somehow a movie becomes a little more fun when it’s realized that not everything in it is scripted and that there are moments when actors have to improvise. Sometimes it’s on the fly and other times it’s when the director and the actors have decided to go off script and just do what feels a little more natural to them. So something can be planned in advance but go completely off-script and still be called improvised since it might be that a lot of people didn’t know it was coming, and obviously it’s not what was written down. But those are quite often the fun moments since they give up a bit more honesty in acting since the reactions of those surrounding the actors might be a little more genuine and not as stiff. That and the fact that the audience will believe it was planned all along are parts of why improvisation is so great since it takes something that wasn’t originally planned and makes it into something that people tend to remember in a big way. Sometimes these moments tend to make the movies that much better for having been there in the first place.

Here are just a few of the most memorable improv scenes in movie history.

5. The deli scene in When Harry Met Sally is unscripted.

This scene was an unscripted bit between Rob Reiner, Meg Ryan, and Billy Crystal, and obviously was something that a lot of people still remember since it was a bit over the top even for this era, though it did make a point. Rob Reiner’s mom even delivered the line “I’ll have what she’s having.” and it was Meg Ryan that wanted to do this in a public place. Imagine someone doing this now in a public space and how people would react. Cellphones would be up and recording every second of it and opinions would be flying only seconds later as people would either laugh or condemn it.

Given that Bill Murray knows how to do improv like none other, it’s not hard at all to believe that he did this without any need for practice since he went out and started whacking away. Harold Ramis, Bill’s longtime friend, knew what Bill was capable of and allowed this to happen simply because he knew it would likely turn out as something great, and of course, it did. Groundskeeper Carl would have likely been let go a long, long time ago in this day and age, but back in this era the comedy that came from putting this character into the movie was nothing short of classic.

You might think that other lines in this movie are more worthy of remembrance, but Richard Castellano made this up on the fly and it stuck since Paulie’s death was definitely something that people paid attention to. Folks don’t tend to think that the Mafia was that serious at times, but even some of the old bosses that are no longer in the life would tell you that no one gets away with being a stoolie and no one gets to act with impunity when it came to the mob. Paulie’s execution might have been nicer up for the movies but it does feel as though it’s something that would have gone down like this.

2. The cafeteria scene in Animal House was all Belushi.

It’s easy to imagine that Belushi’s costars were kept on their toes quite often trying to keep up with him since the famed comedian had a knack for busting out something funny at any given moment. But this cafeteria scene was one of his shining moments since his trip down the lunch line was all improvised, as was his short but sweet stint at the table when he played a guessing game with Greg and the others. The looks on their faces right before he popped his cheeks and announced “I’m a zit! Get it?” were just priceless since they knew something was coming, but they still had to keep acting.

1. The swordsman scene in Raiders of the Lost Ark was improvised.

Some folks might have actually expressed irritation with this scene since it’s featuring a skilled swordsman that’s obviously proud of his ability, and he gets taken out with one shot. The hilarity of it though does stem from some misery since Harrison Ford was apparently suffering from dysentery and didn’t want to be filming for three additional days as planned. Instead, he mentioned this scene and was rewarded when it turned out to be a good idea. The swordsmanship of the guy in black is kind of questionable to start with since if you’re going to kill someone with a blade then do it, don’t grandstand. But the morbid comedy of it did please a lot of viewers.

Sometimes improvisation is just too much fun.