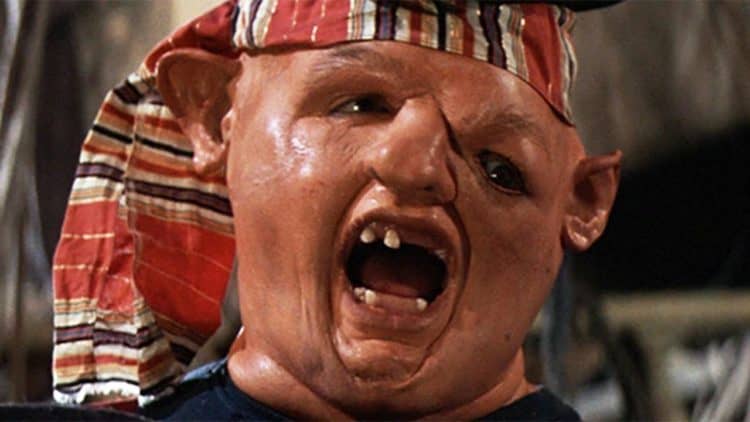 Quite often what we see in movies is that the good guy, or woman, is attractive, very well built, and is usually at least marginally to highly intelligent. In other words they’re the attractive people that we want to look up to and admire. But to be fair there are some creepy and very scary-looking heroes out there that don’t get a whole lot of credit, largely because they don’t look the way we expect or were somehow buried by their reputation or the story itself. Some of the good guys that were considered flat out ugly and scary looking were actually some of the best characters out of the whole movie and tended to be there and gone without that much fanfare, even if they deserved more. Their legacy isn’t exactly something that a lot of people are bound to remember for various reasons, but they’re too hard to forget for movie buffs since to be realistic they did leave an impression on a lot of people. But the stereotype of the attractive hero is definitely something that gets pushed quite often and is a little self-defeating since not all heroes look like super models and action stars, as some of them look almost ordinary to downright ugly.

Here are some of the scariest-looking heroes in movie history.

Marv does not look like a guy you’d want to mess with, EVER. He has a face that looks like it could get hit by a dump truck and suffer only minor bruises and scrapes, and from what he goes through in the movie it’s likely that this would be an interesting test of his abilities. But on top of that he’s able to get violent at the drop of a hat and has a few mental issues that aren’t a serious impediment but can definitely be troubling since he’s not all there all the time. But his penchant for violence and his looks are what really qualify him for this list since just taking one glance at the guy would be enough for a lot of people to rub their knuckles and tell themselves this isn’t the guy.

So yes, the T-800 started his existence as a villain, but in T2 things changed in a big way and he became the hero after being reprogrammed. In this scene it might be argued that he’s not being all that heroic, but if anyone takes note he does manage to leave those in the bar alive, in some sense. But the deadpan way that Arnold had to deliver his lines the utter lack of reaction was a quality the terminator had that should have made it clear that he’s not playing around and he’s there to get what he needs, or seriously mess someone up. Of course it usually came down to doing both at the same time.

This is another character who was a villain to start with since he gave Spider-Man no end of trouble in the comics. But when he bonded with Eddie Brock he became even worse since he knew Peter pretty intimately and wasn’t messing around. In his own movie though Venom became a hero much quicker than he did in the comics, bonding with Eddie in a way that was far more amenable as Eddie wasn’t depicted as a bad or even overly pathetic guy to start with. Okay, so he was a little pathetic, but at the same time Eddie was someone doing his best to bring down a bit of corruption in his city, but being that he was a small-time journalist he was shut down pretty hard. Like Eddie, Venom was a reject, which is why they bonded so easily.

Sloth would be undeniably scary to a kid that had never seen anyone with his deformities before, and we’re expected to believe that this occurred when Mama Fratelli dropped poor Lotney, Sloth’s real name, on his head when he was little. Something kind of indicates that the kid would be lucky to be alive at that point, though it could be that Sloth’s humongous size was a boon at birth and in childhood and that he was just extraordinarily tough. It’s a thought at least, and one the might go a long way to explaining how he survived so long. But as far as appearances go, Sloth was indeed hard to look at in the beginning.

1. Lucian – Underworld: Rise of the Lycans

As far as the way he looks, Lucian is just flat out intimidating and it’s not hard to see that he’d be made into a villain at one point, albeit a tragic one since the war with Victor kind of made him into something he didn’t plan on being. But think of it this way, this was an alpha born to lycans that might have been killed if not for his usefulness, and he was the architect of Victor’s eventual downfall as well. Also, he backed down a rampaging horde of feral lycans ON HIS OWN. Name any other movie monster, apart from a titan, that could do such a thing. I’ll wait.

Sometimes the scariest heroes are the most effective.