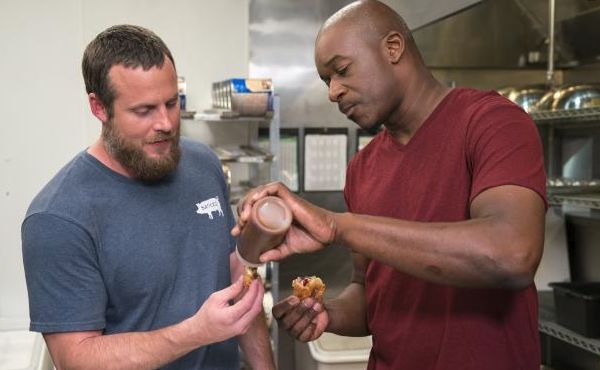 While the Food Network is rarely without dozens of potential options when it comes to new shows to pilot to its millions of viewers every week, their latest concept had a lot of people really invested in what was to come for the network. In a short run series hosted by Guy Fieri, a small group of people were selected to pitch their show ideas to Food Network. Throughout the running of this program, contestants were weeded out and eventually it reached its dramatic conclusion: and Eat, Sleep, BBQ was named one of the shows that the popular culinary network intended to greenlight. In spite of this, there is still a lot about the show that most of us don’t know, so with that in mind, here are five things you might not have known about Food Network’s next big thing:

While there was always the strong possibility that the idea for “Guy’s Big Project” was never going to get greenlighted itself, there was never a guarantee that Rashad Jones (host of “Eat, Sleep, BBQ”) would make the right steps in order to get awarded his own program. For all accounts of those watching along with the world, Jones was neck and neck in competition with “Grill Dads”, who’s pitch consisted of unique fair coupled with delightful and chuckle worthy dad jokes to go along with it. When both were awarded their own show in a surprise twist, the world would be officially introduced to the kind of show Jones was prepared to offer.

When people think of legendary BBQ stops across the country, they don’t usually include Florida in that mix. Jones shows definitively that he not only knows his way around a smoker, but has all of the expertise of a true grill master to give him credibility as he enters some of the of the biggest BBQ cities in the country.Â

Backed By The Successes of Guy Fieri

If you have ever seen the food network, you’ve seen Guy Fieri. He is one of the most known chefs and hosts that the network has, not to mention his rocketing successes for his shows on the network such as “Diners, Drive-Ins and Dives”. In an effort to see that this BBQ show ends up with the same kind of following that his own series would receive, Fieri has made it apparent that he plans to stay involved in both of the projects that were given the go ahead from his competition show.Â

While shows about BBQ fare are nothing new, this is hardly going to be the centerpiece for every episode. In many ways, “Eat, Sleep, BBQ” will be about the kind of eateries that are cooking up BBQ and serving it in truly unique and innovative ways.

What gave Rashad Jones the expertise and experience to talk knowledgeably about grilling and smoking techniques, not to mention critique the cooking of other restaurants, is his well established and successful food truck he’s been running in Ocala, FL with his wife Patrice.