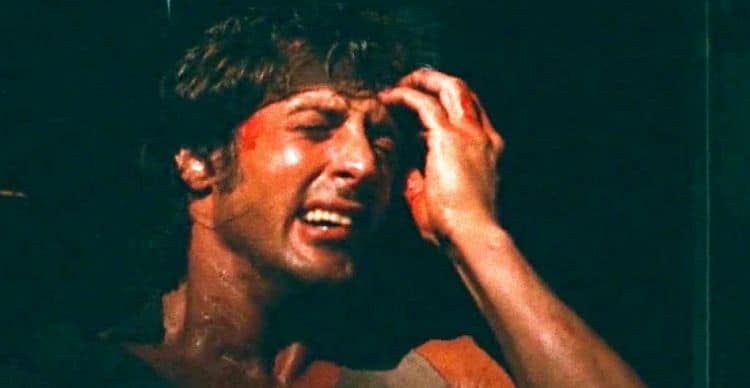 A lot of times Sylvester Stallone kind of gets a bad rep for the way he talks as some people say they can’t understand him and others claim that he’s just not that great of an actor. There are times when he definitely stars in movies that aren’t that great and when he takes things a little too far and becomes kind of hard to take since his character is a bit too unbelievable. But in terms of his acting, he’s not really that bad since he’s had several moments throughout his career when he’s been seen to be pretty good at what he does, especially when it comes to moments that people didn’t expect. He has more range than people give him credit for to be certain, but trying to break his acting style down by saying that he’s not that great at one thing or another is pretty unfair and it does kind of make a person think that the people speaking haven’t seen enough of his movies to really get the idea of how good a range he really has.

Here are a few underrated scenes that Stallone has performed in that prove that he’s a pretty good actor.

5. Talking to Adonis in Creed II during the fight

Any time Rocky is talking during a fight it’s wise to listen since as it was said in part V, he fought wars in the ring, and he knows what he’s talking about. He took a lot of headshots and it was shown that this affected him after a while, but he still has enough of his mental faculties left to be a true coach and friend to Adonis since the moment he finally agrees to train the younger fighter and help him regain his title, Rocky is completely invested. When faced with the same type of decision that he had with his father Apollo, Rocky asks Adonis if he wants to quit, no doubt already knowing the answer. Throughout the fight, it’s seen that his advice helps, and once Adonis listens, it keeps him fired up in a way he didn’t expect.

4. The final fight in Rocky V

Let’s be realistic here, this fight probably wouldn’t have, or shouldn’t have, lasted this long since street fights are insanely dangerous when compared to in-ring fights since there are no gloves, there are no ropes, and there’s no mat to fall down on. Plus, and this is the kicker, there are no rules. That means anything goes, it’s a brawl for all, and the street tricks that Rocky finally falls back on are his bread and butter and what helps him to take Tommy down. But the one line that gets Tommy to turn around after hearing his name is classic, “I didn’t hear no bell!”. Okay, so grammar-wise it’s not that great, but the sentiment is enough to get a lot of people riled up.

3. The atrium scene in Oscar

Yes, Stallone can do comedy too. He didn’t have to be holding a gun at all times and he didn’t have to knock anyone’s lights out, he just had to be his imposing self and act like a thug for part of the movie, and it worked. The fact that this movie isn’t remembered any further than the occasional sneer is kind of hard to deal with simply because this movie was actually pretty funny and featured a lot of great actors at a time when they were either becoming popular or had already hit their stride and were just rolling along. But Stallone in this movie was great since he had free license to just have fun.

This is undoubtedly the most heartbreaking moment that Stallone has on film since like it or not, he played the part of John Rambo to a tee in the first movie since he was a war veteran that had seen and done some seriously traumatic stuff. While it was quite a bit different from the book, in fact, it was very different, the movie was still hard to forget since this scene, in particular, was able to reach a lot of people given that Rambo had a serious problem and his inability to walk away after being pushed only aggravated the situation. It’s kind of hard to say who was really in the wrong in the opinions of some folks, but this scene alone was enough to make a lot of people feel that Rambo needed help.

Just think of how many times this speech has been watched and how many people have been inspired by it, and then think of how inspiring it still is since apart from the more personal aspects this speech can apply to a lot of people and their lives. This was undoubtedly one of the best lines to come from any Rocky movie and it’s still one that people happen to like today.

He’s a much better actor than people give him credit for.