Apologies for not getting a review out for last week’s episode. My laptop tried to go into winter hibernation for a week and a half, but I think I got it under control. 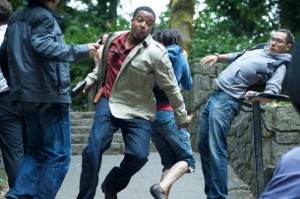 One of my main problems with the pilot of Grimm was its worrying dual selves, wherein the show could go big and a little campy or it could go dark and somewhat gritty, with both sides of the coin containing a certain amount of credibility. It’s a backhanded sort-of problem (“you do too many things well! stop it!”) that generally gets worked out through time, network notes, and fan feedback, but until it does get worked out, episodes tend to be more hit-and-miss than the talent involved would make you think.

What’s most interesting about “Lonelyhearts” is how much of a resemblance it bears to the pilot and how much better than the pilot it actually is. Well, let me rephrase. “Lonelyhearts” is better than the show’s pilot at balancing its two distinct sides, fusing a dark case (guy lures women to his house and keeps them in cages) with spots of humor (Monroe’s cello, Juliette’s banter with Nick), grossness (the toad snacks), and striking visual images (Billy’s garden) to create an episode of TV that embodied steadiness. I know, it’s hard to call an episode featuring decapitated body parts, almost-date rape, and lots and lots of gas “steady”, but “Lonelyhearts” did what an episode of Grimm does without straying too far up or down the Qualitative Scale of TV Awesomeness (that I’m building in my basement). You could argue that this represents lack of ambition, that a show should be shooting for the moon any chance it gets, but from a new show, I merely expect them to figure out who they are, at least in the early episodes. For its faults, “Lonelyhearts” shows Grimm settling in a little and you know what, that’s okay.

But let’s get to the specifics, shall we? Was it just me or did the episode feel a little horror movie-ish at times? “Beeware” hinted at old B-movie (hur hur) awesomeness with its creature feature plotline and “Lonelyhearts” continued in a similar trajectory. However, instead of on-the-rampage animals with more of a brain than expected, we got some good old fashioned gruesome violence in the form of Renard’s punishment of Creepy French Man, dingy green-hued lighting, multiple toads being ingested by Billy (Goat Gruff), hallucinations of snakes/saws/spiders, and women locked in tiny cages. It was never scary, per se, but it definitely upped the creep factor from previous weeks and the show was better for it. Of course, they didn’t go too overboard, eventually sprinkling in some Monroe to keep things from getting too heavy, but it was a very Grimm Grimm episode and the fact that you can use Grimm as an adjective is testament to how distinct the show has become in its brief run. There really is nothing else like Grimm on TV and that’s a great thing, so I hope they keep embracing the darkness and go even further down the rabbit hole of creepy lighting, quick cut camerawork, and tense music. 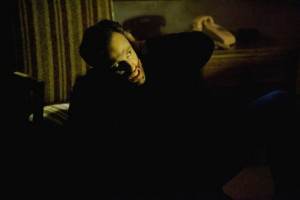 As mentioned above, “Lonelyhearts” was similar to the pilot, but it went a little over the line from being similar to already feeling like a redux in cases. If you’ll remember, the pilot concerned a man who would bring girls in red jackets home to his cottage and keep them locked in his basement before eating them; tonight’s episode had a man who would bring girls home to his bed & breakfast and keep them locked in his basement. In a show with procedural elements, you’re going to have cases that resemble one another, as there are only so many scenarios out there, but to have two cases in four episodes that almost mirror each other is a little troubling. I think that both were handled fairly well, with the police work tonight far outreaching the pilot, but it’s a little lazy and makes it seem like the show is using the creature-of-the-week to mask any plot similarities that the two episodes might have. If we’re already experiencing deja vu four episodes in, what will we be doing 5, 10, or 15 episodes from now?

The other disappointment about the episode was the fact that the B-plot didn’t really do anything for me. After last week’s episode gave Nick a warning that someone would be coming after him, we presumably saw the danger in a nameless French man that came to town to settle the score with Nick for the death of his friend. I loved the scene with Captain Renard getting his Kill Bill on, but overall, the entire sideplot was very muddled and didn’t illuminate a thing for me. Well, aside from the fact that Renard doesn’t play, that is. We don’t know who this man is, who he’s connected to, any details about the shooting of his friend, or if he’ll even be back for another episode, so it felt like too much mystery and not enough payoff. To beat it all, he never crossed paths with Nick, so if he doesn’t come back, it’ll feel like an even bigger waste of time, especially since a defined, recurring big bad would do wonders for the show’s quality.

Grimm is a show still finding itself, but “Lonelyhearts” showed that self-actualization may be close at hand. The show put forth a better understanding of how to combine humor and darkness without sacrificing the effect of the other on the story, as it seems content to produce a moderately creepy mini-horror movie every week, complete with a healthy dose of sarcasm and strong visuals. It wasn’t an episode without faults, though, since the side plot was more or less a non-issue when it had the power to raise the stakes and the case-of-the-week was a sort-of rehash of the pilot. The thing is, storytelling, especially on a procedural, isn’t a huge problem that will take weeks upon weeks to fix like it would on a serialized show, so I’m not (yet) terribly worried about Grimm‘s future. I’d like to see the cases themselves get a bit stronger, but on a show like Grimm that has several plates spinning per episode, I can handle a weak/repetitious case as long as the rest of the episode makes up for it. In the case of “Lonelyhearts”, it wasn’t a huge detriment, but going forward, the show needs to continue showing all of what it can do instead of leaving itself open to stagnation.