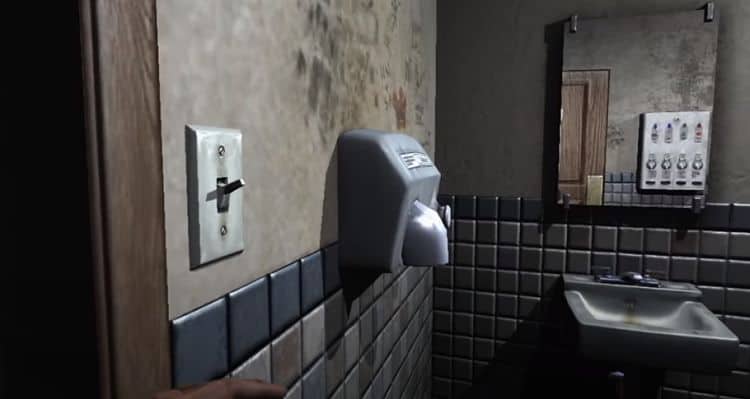 So, to put it lightly, someone really has a thing for bathrooms in video games, which is kind of awkward to say the least but also bound to be something that game designers might like to hear. As the writers at Geekologie might agree it is kind of an odd thing to notice in video games that are lauded more for their action than their accurate portrayals of bathrooms, but it is something that one can’t help notice is a facet of video games that we don’t always look at that much. Usually if anyone thinks about a bathroom in a game it’s because there’s a scene in which some sort of action is to be taken in the bathroom or because someone is that detail-oriented. It’s easy to give props to the people that manage to make some of the rooms look so realistic and take the time to make the toilets flush, the water turn on and actually overflow, the showers to look realistic, and so on and so forth. But it’s still an oddity to think about in a video game if only because not a lot of action takes place in the bathroom when it comes to a lot of games. The idea that someone would spend hours upon hours in a video game bathroom, just letting their character hang out, is kind of odd to say the least, but apparently sounds very soothing for some folks.

Various features in video games tend to get a lot of attention for a number of reasons but bathrooms are one of those areas that a lot of people might not think about that much unless they’re pertinent to the story and have something to offer to the plot. Even then it’s likely with a lot of games that the bathroom functions are going to be as detailed as you see in this videos. That the creator of these clips went into such great detail about each bathroom is kind of odd to be certain, but at the same time it’s something that obviously interests him, so mocking it isn’t really needed or expected. What is kind of expected is that there’s justification, and he gives plenty of it, even if from a different perspective, for his views of the bathrooms and why their various functions are needed in the games they’re found in. A lot of us might look askance at this kind of information and wonder why it might be even a little bit interesting, but at the same time one has to remember that a lot of different people notice different parts of video games in a lot of different ways. Some of us might notice the artwork, others might notice the movements, and some might notice something entirely different.

Bathrooms though are something that a lot of us can’t help but wonder at as to their importance. In real life they’re typically a place you use when it’s absolutely necessary and then don’t worry about any other time. When a person figures out how much time they really spend in the bathroom though it might be kind of eye-opening. According to Granite Transformations the average person spends around 182 hours a year in the bathroom, which sounds like an excessively long time. When you factor in the fact that this is the average, and that some people might actually spend more time than many others, it’s definitely eye-opening. But spending more time in virtual bathrooms wouldn’t make a lot of sense unless someone found them to be somehow soothing. One has to wonder if the design teams responsible for such well-rendered bathrooms have taken into account such statistics when creating such rooms.

There are a few odd things to note to be certain, such as the need for a toilet that flushes, since the whole idea of a toilet flushing usually means a person has done their business and needs to get rid of the waste, which would be just flat out gross in a game as it is in real life. But hey, at the very least the games never appear to go that far, as you can bet that someone would complain and would get the ball rolling on banning or censoring the game in question. After all, it doesn’t take much to offend people these days and video games are already a wandering target for some folks as the writers at Looper might agree. It wouldn’t take much of a push to get someone to complain about such a thing, and it does feel as though there might be plenty of people out there that would monitor clips like those above carefully just to be certain that nothing was being shown that was deemed as too graphic. All in all though, while enjoying bathrooms in a game might be a little odd, it’s not the strangest thing that’s ever been seen.