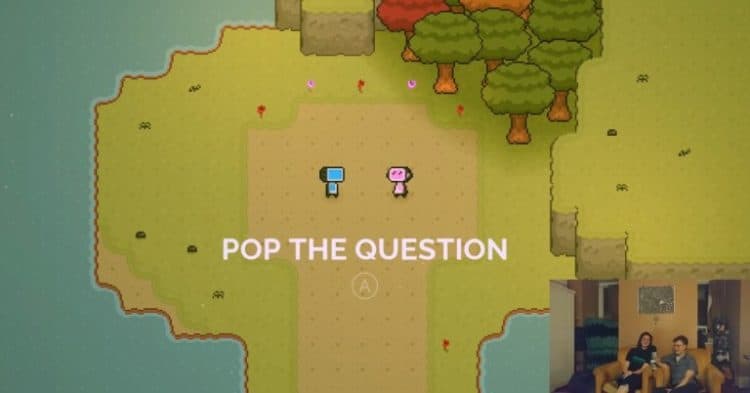 Of all the different ways a guy could propose to the woman he loves this is one of the more inventive, but it’s also one of those that has the most obvious setup since if any woman has ever listened to a proposal, and many women likely have since many women still tend to grow up wanting to get married at some point whether it’s to a man or a woman, then this should have been pretty obvious. Give the guy credit though, he did talk her up in a very convincing way since he gave her a good deal of credit for sticking by his side and doing what she could to build him up. That’s one of the best things about a relationship, after all, you build each other up and keep each other going through the hard times while celebrating the good times when they come along. But creating a video game to propose to someone is definitely an interesting idea that would take a while and would require the right moment. Of course, if the guy in question had been developing this game for a while and his girlfriend had been pushing him and supporting him to do this, then he obviously picked his spot perfectly and couldn’t have possibly done any better.

The lead-in to the proposal was fairly obvious, but it’s something that a lot of people are still willing to admit was kind of nice and needed since simply asking a person to marry you kind of ruins the moment depending on how a person is going to react and what they really expect of their partner. It’s almost a ceremony in itself sometimes since a marriage proposal is a big deal more often than not and the tension that rises when said proposal is about to be delivered usually has hearts knocking in chests and people breathing heavily since it is a big moment. People can argue against this all they want, but even if you happen to know the answer that will come, the fact is that the person doing the proposing and the person waiting on the proposal are both nervous, even if they’re extremely happy, since this is another step in life that requires a lot of patience, understanding, and a great deal of teamwork in order to make it happen. Some folks can’t bring themselves to take this step for fear of what might happen to their lives, others don’t do since they don’t want anything to change in their life, but the truth is that eventually, we get older, we want someone there at our side, and we want someone that will want us. Being married isn’t the end of life, and it’s not a death sentence to the fun that one wishes to have. It’s a joining of two people that want to start a life together, and despite the fact that there will be compromises, it’s still easy to understand that there will be a lot of fun to come as well. What’s really interesting about this scenario is that the guy didn’t spend two years just for this moment.

Obviously, it’s not as well known as many other games, but it is a legitimate game apparently that can be played. It’s nice really to see that the guy didn’t spend two years of his life simply making a proposal in the form of a video game that would become a fond memory but nothing useful later on, and it’s even nicer that it sounds like his fiance had a good deal of input when it came to the game. That makes it evident that they’re already a good pair if he’s willing to take her advice and input and she’s willing to give it, since that’s what a good marriage is, a lot of give and take, even when you don’t want to do either. This was definitely one of those times when the person making the proposal went to great lengths and had a plan that was somehow as perfect as it could be and didn’t stand much of a chance of failing unless something truly catastrophic went wrong. There are marriage proposals that are so far out of left field and some that are so elaborate that failure is kind of a given if it does happen, but success means a person will blow out a long breath of relief when they finally hear that single ‘yes’. This time though the guy making the game had a solid plan and it was pretty simple to think that the woman was going to say yes since not only did he butter her up in the nicest way, but it sounds like the relationship was pretty solid to begin with.