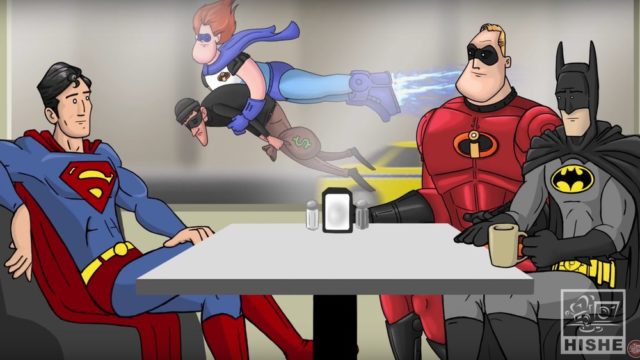 So how the Incredibles should have ended is that Syndrome should be a good guy? It wouldn’t have been much of a movie then would it? After all Syndrome was the kid that was spurned by Mr. Incredible and eventually turned to evil because he felt so disrespected by the supers. If not for the struggle that ensued the movie could have gone a lot differently and been a lot more boring. As it was the Incredibles movie was pretty cute and in many ways entertaining, but it definitely had to have some sort of struggle to it.

That being said I still wonder about why movies make it so easy to conceal one’s secret identity when there are so many clues as to why a secret identity is almost impossible to keep. The little half masks, the skin-tight costumes that reveal a person’s real size and dimensions, and the fact that none of them disguise their voice seems to make it obvious who they are in real life. So why are civilians always dumbfound when they realize who a superhero or villain really is?

A big part of it of course is the attitude a hero or villain displays when they’re in character. Villains tend not to worry so much about their alter ego since as a villain they have a lot less need to worry about the boundaries between reality and fantasy. The two tend to come together quite nicely for villains since they are all about taking what they want in a variety of ways while attempting to make sure than any opposition to their power is neatly handled.

Heroes on the other hand are usually not trained law enforcement agents, and have special abilities that enable them to perform superhuman acts, but still don’t give them the legal right to perform them. That’s why most superheroes these days are known as vigilantes. They operate outside of the known law and in many ways subvert the idea of the law by indicating that because of their abilities and their actions that are geared towards creating or maintaining a better society through their actions. The supers are able to live beyond and above the law simply because they can do things that no one else can.

The Incredibles is not the first movie to try and bring the supers to heel however. Heroes in other movies have been hounded and persecuted as well. The new Superman movie is a good example, as is Christopher Nolan’s Batman trilogy. Watchmen is another good example of how heroes are persecuted for their actions, as vigilantes are not considered to be as favorable by police officers. In many ways they are seen as meddlers, irritants, and are even accused of causing more harm than good.

In the Incredibles however Syndrome becomes the real problem, and unfortunately this clip kind of gets it right. Mr. Incredible could have handled it a lot differently rather than dismissing the kid out of hand. After all, Syndrome was pretty smart, maybe he could have worked alongside Edna for a while and really developed his skills.