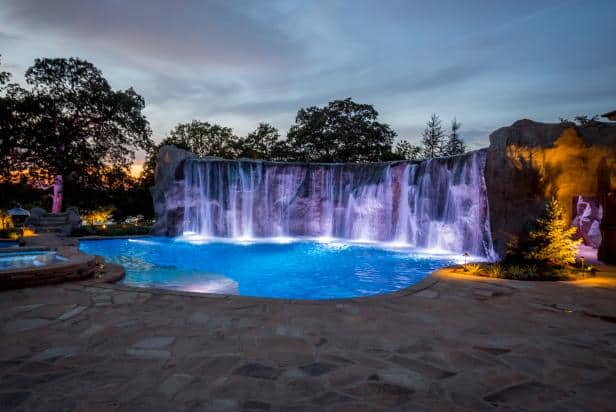 When it comes to homes, HGTV has every single niche and corner covered. The television network pretty much has a show about everything that has to do with owning a home and wanting a home. The show premiered in 2016 and has since had a steady viewership of homeowners and dreamers looking for ideas on the best pool build. Pool Kings has since had 8 seasons and over 40 episodes. The show has brought us stunning waterfalls, swim up bars, luxurious backdrops, and so many more. If you’ve just stumbled upon this gem of a show on HGTV, here are 10 things you probably didn’t know about Pool Kings.

For the first few years of the show, Pool Kings revolved around the business of Kyle and Justin Peek. Kyle Peek is the primary owner of a Tennessee-based pool and spa business known as Peek Pools. Kyle has been building pools for about 40 years now, and he has built over 10,000 pools throughout his entire career. That’s quite an achievement for one business alone, but that’s exactly why Kyle Peek is considered a “pool king” to begin with.

In the show, we also saw Justin Peek, Kyle’s son. Justin works for the family business. One of the biggest draws of the show was the banter between Kyle and Justin and the other family members that we saw from time to time. Justin has a brother, Corey, whom we saw on the show as well. The relationship among the family members is something that’s deeply valued by the Peeks, and that’s quite evident with the way they all interact with one another and the way they approach their business.

It’s hard to imagine the Peeks having time for anything else other than their business. After all, you can’t get to 10,000 pools without putting in the work. However, when Kyle isn’t working, he likes to indulge in his passions. He loves to listen to music and play golf occasionally. He also loves to cook for his family. Whatever it is that Kyle is doing, he’s more than likely spending his time with his wife Miki and his children.

One notable thing that Kyle is involved with is the Special Olympics. The original “pool king” is passionate about giving back when he can, so he devotes a good amount of time helping out and working with the Special Olympics. Kyle says that his faith is one of the main reasons why he does it, but it’s also something more personal to him. Kyle’s stepdaughter has disabilities, and she has inspired Kyle to do more in order to help others. It’s an inspiring sentiment that Kyle wishes to pass on to his children through his example.

After 2018, Pool Kingshad a change of cast and crew. The last few seasons feature a different set of “pool kings.” This time around, we see Paul and Brian Porter take the lead on the show. Father and son duo Paul and Brian are the owners of Premier Pools and Spa. It’s another family affair that seems to work well on and off the business, on screen, and off screen. Paul and Brian brought a different dynamic onto the show. It isn’t necessarily better or worse than the Peeks, but the Porters have made the show into their own.

It’s safe to say that while Peek Pools is a large company, Premier Pools and Spa is an even bigger organization. The company has been building pools since 1988, but having built over 60,000 pools is not the company’s finest achievement. In fact, Premier Pools and Spa happens to be the largest pool building organization in the world. The company currently boasts over 40 franchises. It’s an achievement worthy of acknowledgement.

Unfortunately, even a positive and family-oriented show like Pool Kings gets its fair share of naysayers. In this article, the show is ranked as one of HGTV’s worst shows. The reason behind the ranking was the fact that the show only revolves around pools. Some people believe that the subject matter is too specific and that there aren’t enough pool ideas to go around. Pool Kingshas definitely made enough amazing episodes to prove that reasoning is flawed, and the fact that Premier Pools has done more pools than you can imagine is proof enough that haters should just back off.

Pool Kings is exactly the kind of show that you can just leave on and binge on. The visual treats you can get from the show are endless. You’ll see a ton of unbelievable designs from this show. But apart from just being visually appealing and entertaining, Pool Kings is actually educational in a building and landscaping sense. There are so many ideas you can pick up from the show that you can apply to your own pool backyard. For instance, we learned from Pool Kings that you should always start the pool building process as early as possible. We also learned that a pool can be smart too (just like your smart home), and we learned that you can solve the problem of having uneven land by building a multilevel pool.

This particular show is quite different from other building and renovation shows from the network. For example, the Porters might have several business projects going on while also filming a project for HGTV. Building a pool could take up to 12 weeks just like the Georgia Peach Pool Paradise that the Porters built in 2018. That means that filming usually happens over the course of the project. The bigger and more complex the pool, the longer filming will take.

Brian Porter, VP of Premier Pools and Spas, was selected by the APSP committee to be win one of the industry’s highest awards: the Young Professional of the Year Award. The APSP organization is dedicated to finding the best among the next generation of pool and spa professionals.