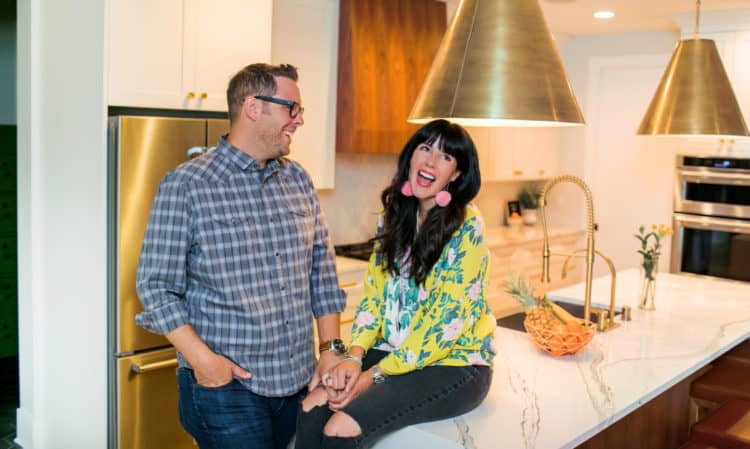 It’s a tough decision, do you need to expand the home you have, or sell it and move on to a new home? On the one hand, you have to put up with construction where you live and all the other problems that come with upgrades. However, the payoff is that you don’t need to move or start a new mortgage, and your property value goes up. On the other hand, moving means you don’t need to spend as much time waiting to get into a bigger place, and you may find a place that has everything you want. Of course, you’ll have to worry about selling the old one, staging, strangers wanting to do walkthroughs, and you don’t get to customize the space in the same way. On Stay or Sell, the dynamic husband and wife duo of Brad and Heather Fox can help figure it out with their eye for design and keen understanding of what people are looking for in their homes. New or remodeled, the Foxes bring their own style to every job. We’ve collected ten unique facts about the show for you to look over while you think about your own dream home.

When the Sun Tribune interviewed Stay or Sell hosts, Heather, and Brad Fox this August Stay or Sell the married hosts had a lot to say about their new program. They’re thrilled to show America some of Minnesota’s allure and charming sights. However, what everyone is most curious about are the houses and design. When Kim Palmer asked the couple about their unique take on home design, Brad explained that their style incorporates modern elements, Minnesota unique pieces and an undertone of Scandinavian influences in everything they do.

In the original pilot episode, Heather was given some fashion advice. Namely, she was told not to wear a particular pair of earrings, pompoms that she’s fond of. Apparently whoever made the suggestion felt they were “too edgy,” and they might give the wrong impression. However, once the pilot was picked up for the initial eight episodes, all the wardrobe approvals went away. The Foxes were free to dress and act naturally.

HGTV has had its share of scandals. Not the least of which is the trouble with another particularly beloved home renovation show called Fixer Upper. Apparently, the beginning of the show, or rather the large portion of the show where people go house hunting, might be faked. In Season Three, a participant named David Ridley outed the show for having him fake his way through the whole process of house hunting. According to Ridley, not only did he not go house hunting on the show, but you must already be under contract to purchase a new home already to be on the show. What does all this have to do with Stay or Sell? According to Heather and Brad, nothing is scripted on their show. Every reaction is genuine.

There may not be a script, but there’s plenty of drama on Stay or Sell. The projects are typically a whole lot larger than most other renew and redesign shows. The Foxes don’t mess around. They’ve done three-story additions as a part of the show. While not every home needs to be changed quite that drastically, you can expect them to go way above and beyond what you see on any renovation show that doesn’t rebuild an entire home.

5. The Foxes Own a Business but…

While Heather and Brad do own a business, they haven’t been doing much work through it since they joined HGTV. During shooting for the pilot they were mostly able to operate normally, but with the show going full time they’ve been too busy to work on their own projects. Sadly, that means if you live in Minnesota, you won’t be able to book them while they’re filming unless you get on the show.

HGTV hasn’t yet weighed in on whether they’ll pick up the show for a second season, but hopes are high. The Foxes have been searching for show-worthy projects so they’ll be prepared for the next season. However, since they run a renovation business, they’ll be doing the work either way. It’s a nice win-win for them and their clients.

When Heather and Brad started out flipping homes, it wasn’t as glamorous as their show makes renovation seem. Naturally, they’ve come a long way. However, they knew it was worth it even though their first flip had standing water in the basement. They had to make plenty of sacrifices to get where they are today. Eating ramen and paying bills late isn’t what you imagine TV stars doing, but when you have a dream, you have to do whatever it takes. For them that sometimes meant scavenging supplies and tackling mold to make it work. Luckily, it all paid off in the end.

Heather and Brad almost took a pass on HGTV for a bizarre reason. When they were first contacted, they thought it was a sales pitch. In a way, we suppose it was, but not the way they thought. As it turns out, HGTV does talent scouting, and they picked the Foxes for a show.

There’s no question about it, Brad and Heather love their work. They’ve expanded from flipping one house to eventually owning a real estate business of their own. Things have changed a lot along the path, but they’re in it for the long haul in every possible way. The couple has two children, seven-year-old Graham, and five-year-old Wesley. Raising a family makes parents want to give their children everything, and success like running a business and even being on TV makes that a whole lot easier.

Remember, at the beginning of this article where we mentioned that one of the downsides of buying new was not getting to customize? That’s not the case for Stay or Sell. Clients who sell their homes get the chance to have the best of both worlds. If they go for the new house, they still get the Foxes expert help with creating a dream home for their family.

It may be a tough call for people on Stay or Sell, but they get a once in a lifetime chance to make the changes they need and be on TV as a result. We’ve certainly enjoyed the show so far. We’ll be looking out for season two eagerly. After all, who doesn’t love a happy ending with a stunning dream home in it? If you could upgrade your current home with more space and everything you need, or choose a new space and start fresh, which would you do? Let us know in the comments.