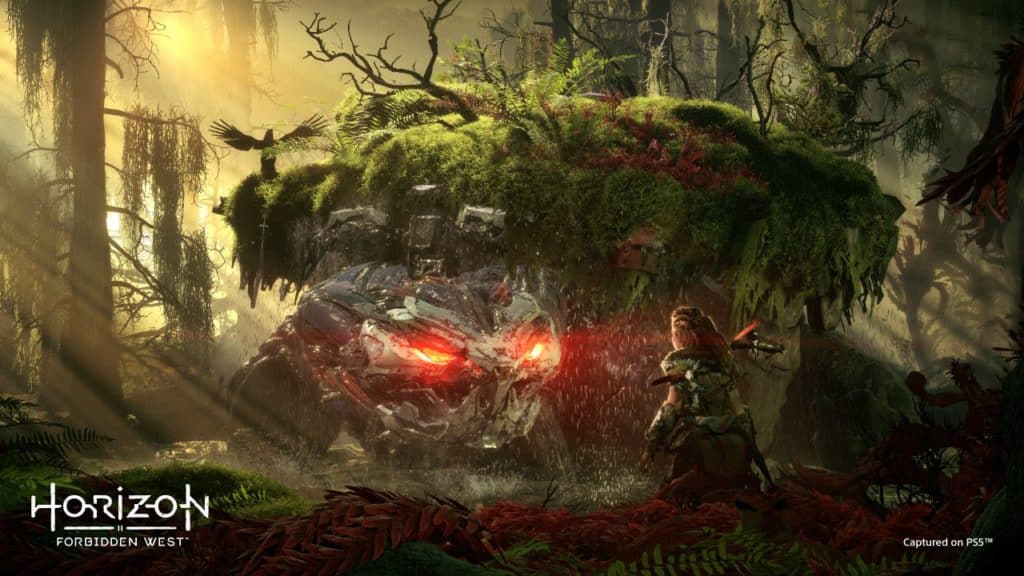 Has anyone saved up for a Playstation 5 yet, or are you still trying to save for it? Pretty much anyone that played Horizon: Zero Dawn, knew that there was a sequel coming thanks to the parting scenes that showed Aloy still out and about after giving control of the Banuk clan back to its rightful leader, and Sylens capturing the sentient program HADES in order to interrogate it to see who woke the program. There is also another program, CYAN, that warns Aloy that yet another old-world program, HEPHAESTUS, is still out among the wilds, continuing to build machines that will seek to eradicate what is left of humanity. For those that don’t know the whole story yet, Aloy, the protagonist, is a special kind of child that was raised by an outcast by the name of Rost, who trains her and raises her until such time that she can join the Nora, his former clan, and become a true warrior. Throughout the course of the game Rost saves her life at the expense of his own, and Aloy, using the mechanical device known as a Focus, that allows her to discover more about the world around and the animal-like machines, seeks a way to understand just how the world came to be what it is, and why a mysterious force is sweeping through the land, corrupting one machine after another.

The first game is a mind-bending and epic tale that takes the player through at least three different states and the ruins of a civilization that was felled without any knowledge as to why. As Aloy continues her quest she discovers that mankind was, as expected, the architects of their own doom as the sentient programs eventually wrested control from the humans and continued to create mechanical beasts in such numbers that they eventually began to overrun humanity, destroying the earth in the process as they exist on biomass. While the game does have its set boundaries and doesn’t allow the player to step beyond them there is still much to see and do as they can craft weaponry, armor, traps, and eventually watch as Aloy grows strong and skilled enough to take down some of the toughest machines with specialized arrows and attacks. Monstrous creatures that are all but unbeatable at the beginning of the game tend to fall easily once one has reached a certain level. So far however, the second game looks even more amazing, as it can be seen at one point that a giant turtle-like machine will factor into the equation, and the diversity of the creatures will continue to expand. It’s also apparent that Aloy will be allowed to journey beneath the water this time as well, perhaps for underwater combat, or maybe just for exploratory means. However it happens, this game already looks amazing and more than worth the money. The only unfortunate part is that if players wish to partake of this game they will have to buy into the new system since playing a PS5 game on a PS4 isn’t anywhere near possible.

Thankfully it does look as though the unit price will be slightly less than the PS4 was when it first came out. It also sounds as though several PS4 games will be able to play on the new system, which will likely make a lot of players happy since it could save a great deal of money in the process. Seriously, even when buying used and reduced-price games they can get expensive, as most players know. But just watching the trailer for this game thus far is enough to give anyone that enjoyed it chills since the quests are bound to be more expansive, the combat perhaps more detailed, and it looks as though Aloy will travel even further than she has before. One has to wonder though what kind of personal revelations she’ll find along the way, as she already found the resting place of her creator, which was a rather sad but also heartwarming scene at the end of the game that made a lot of sense. In the sequel however it’s obvious that Aloy will be looking for a way to find HEPHAESTUS, and it’s also possible that Sylens and HADES will be searching as well. Anyone get the sense that we shouldn’t trust that Sylens is out for the greater good any longer?Â  With a new threat to the world spreading through the lands, a new faction that’s obviously rising to power, and new machines to be unveiled, this game is already looking like it will be off the chain and more than a fitting sequel for the first one. It’s a sure bet that we’ll see new skills, items, and techniques this time around, and for a lot of us that know the game, the wait is going to be tough.