Home
Entertainment
How Good Of A Martial Artist Is Steven Seagal Really? 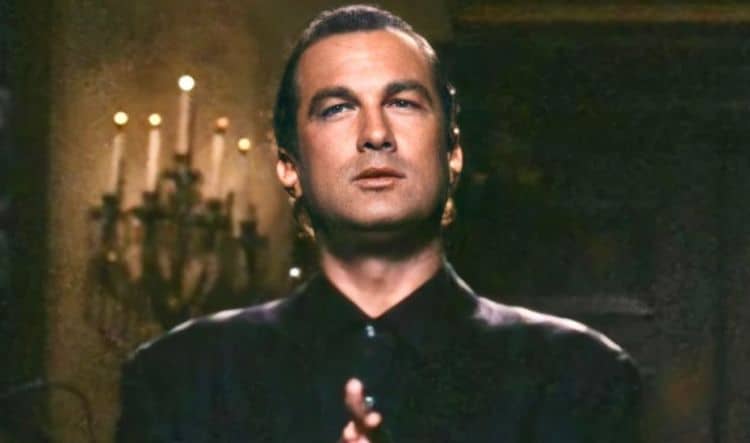 One of the most divisive action stars ever is Steven Seagal. I am a fan of his movies, at least his early work, but he’s certainly past his prime. I won’t poke fun at him now that he’s older, but let’s take a look at his career when it was at its peak. I’m talking back before I was even born.

First of all, when was the last time Steven Seagal was in a movie that was released in theaters? Last I checked, it was the first Machete movie, where he played the villain. Ever since then, his filmography has consisted of a bunch of direct-to-video movies. I haven’t seen all of them, but the ones I have seen… were not that good. Needless to say, Steven Seagal has evidently put on some weight and that goatee seems to be his new look. We should also recognize that his acting skills really haven’t improved over the years. He’s basically the same character he plays in every movie.

That’s actually pretty common with several action stars, but it’s pretty on-point with Steven Seagal. I mean, seriously, he’s literally the same guy in every movie he’s in. Even Jason Statham has changed it up throughout his career and strayed away from the usual Jason Statham-ey characters. Steven Seagal, on the other hand, has NEVER changed it up. He’s always the very tall, not exactly muscular, stoic tough guy, who dominates every guy he fights. And he also does that very funny-looking run he does. It’s kind of hard to take him seriously once you see how he runs. The point is, he’s the same Steven Seagal in every movie he’s in.

Let’s look at his most popular role. That would have to be Casey Ryback from the Under Siege movies. I’ve only seen the first one, which was enough, but that has to be the movie role that has stuck with him the most. And no, I have not seen his television series. Based on what I’ve heard about it, it’s basically Steven Seagal surrounded by a bunch of yes men. That doesn’t really sound fun to me, so I’ll just stick to his old movies.

Let’s just look back at his most popular movies that were well-liked back when he was a movie star. In my opinion, his best movie is 1990’s Hard to Kill. This was his second film after his Hollywood debut in 1988’s Above the Law. Now I did like that movie too, but I personally prefer Hard to Kill over that one.

And yes, I did find Under Siege entertaining, but that’s mostly because of Tommy Lee Jones. Seriously, he was flipping phenomenal as the villain of that movie. And it wasn’t just him. Remember how awesome Gary Busey was in that movie? Sometimes, it is the villains who make the movie and in the case of Under Siege, Tommy Lee Jones and Gary Busey were the real bread and butter of that made the movie fun to watch. Sure, Steven Seagal did do his usual thing, but it was really Jones and Busey’s performances that really stood out.

So Under Siege is often considered to be Steven Seagal’s best movie. Understandable, but rewatching Hard to Kill made me want to do some thinking on his legitimacy as a martial artist. First and foremost, I do like him as an entertainer. Most of the time, I do enjoy watching him in movies. I think what I like most about him is that he does standout from other martial artist actors. That’s mainly because he uses a particular martial art that other actors don’t practice. It’s the art that he’s been practicing since he was a young teenager and it’s a Japanese martial art called aikido.

Now as a fan of martial arts, aikido is often considered to be the least effective of all the martial arts. Maybe that’s because of Steven Seagal has made it popular, at least in his own way. If you’ve seen his movies, when does he ever get aggressive and throw a flurry of punches or flashy kicks? He’s the guy who always waits for the bad guy to come at him. Aikido is about redirecting your opponent’s energy and using it against him. When the bad guys attack Steven Seagal, he always counters their attacks and either throws them or breaks their arms. Based on what I’ve read about his particular style of aikido, called tenshin if I’m not mistaken, it emphasizes on arm-breaking. Whenever Steven Seagal comes across a guy with a weapon, that’s usually what he does.

Steven Seagal is a 7th-dan black belt in aikido and has been an instructor in the art for decades. A significant achievement on his resume is that he’s the first westerner who became the owner of a dojo in Japan. That’s an impressive accomplishment and he’s done plenty of demonstrations. You can go on YouTube and check out a seminar he did back in 1992 where he was younger and much thinner. He looked good in the video and tossed around most of his students, who were coming at him at full force.

However, if you look at the way his students were “coming at him”, you would probably scratch your head. It actually reflects on the reason why there’s so much controversy towards aikido. Steven Seagal was redirecting the energy of his students, but that’s because you can tell they weren’t really trying to attack him. Their “attacks” were more like a drunk man’s bull charge that you could see coming from a mile away. Needless to say, it doesn’t take much skill to counter those. That’s probably the biggest issue with the training of aikido. There is a serious lack of realism in their training and that’s why aikido is considered to be ineffective for self-defense.

But what about competition? There really isn’t any. You won’t see any aikido masters fighting in the UFC, but you’ll see Steven Seagal training top-notch fighters like Lyoto Machida and Anderson Silva. It’s become a running joke for MMA fans that Steven Seagal likes to claim that he’s taught both fighters superb techniques. The best thing he did was recommending the crane kick for Lyoto Machida. He used it and knocked out Randy Couture. Okay, he deserves some credit for that one. But during their training videos, for both fighters, they both often look confused whenever he shows them aikido techniques. I respect them for wanting to learn techniques from other arts, but I can tell they knew what Seagal was teaching them couldn’t be used in the Octagon. But hey, it’s always fun to learn new things.