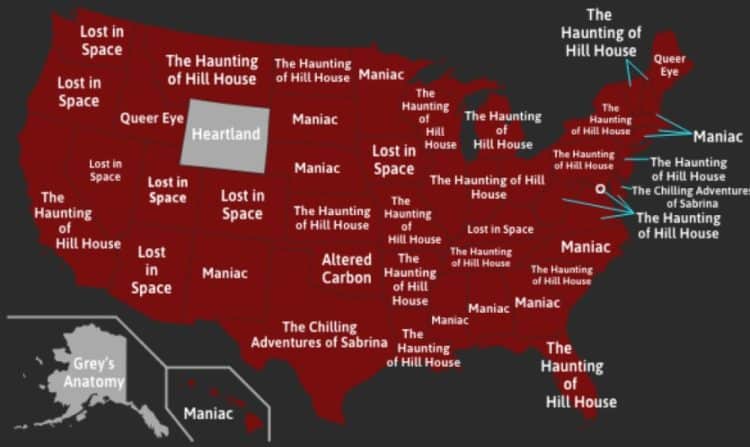 Netflix has been one of the world’s favorite streaming services since it first emerged on the scene, but in order to keep up with changing consumer preferences, new competition, and an ever-present desire to become more profitable, the company is preparing to go through some key changes in the coming years. One of the most pressing changes, as you might expect, is a push for more original content; not only does original content reduce the competition that Netflix faces, it also gives them more control over the quality of content they host. So just how important is original content going to be, and what are the best success stories Netflix has to offer in its lineup of originals?

The Most Loved Shows on Netflix

InMyArea created a graphic on theÂ most loved shows on Netflix as they’ve changed from 2013 until present. The maps in the preceding link are color-coded, with gray representing licensed content (i.e., shows from other networks), and deep red representing Netflix original series.Â  Back in 2013, the map of the United States is covered in gray. Our favorite Netflix series varied, with standouts like Breaking Bad, Mad Men, and Sons of Anarchy represented all over the map. The few states that did have a Netflix original as their favorite show on the streaming platform seemed to favor House of Cards, with one state preferring Orange Is the New Black.

Compare that to 2018. Now that Netflix has both weeded out some of its licensed content and introduced a plethora of new shows, the map is covered in red. There are only two states whose favorite show on Netflix is not a Netflix original (Alaska likes Grey’s Anatomy and Wyoming prefers Heartland). Aside from those, the map is dominated with titles like Maniac, The Haunting of Hill House, and Lost in Space.

It’s also interesting to note how the general preference trends have changed over the years. In 2013, when we were first getting acquainted with the concept of binge-watching, binge-able shows took the spotlight. In 2014, our preferences tilted toward suspense, with titles like Marco Polo and American Horror Story. In 2015, we loved crime shows, with Bloodline, Jessica Jones, and Daredevil getting the most representation. In 2016, those tastes rebounded to comedy, with The Ranch dominating the map. And in 2017, Riverdale took over, representing a rare break in the trend of increasing preferences for Netflix original shows.

How Netflix Is Going to Change

So how might these favorite shows change in the future? Netflix is undergoing some significant company changes, some of which may have an influence on the content we love most.

Netflix will also be pushed to change in the coming years by the sheer number of streaming services that are about to emerge. Major companies like Disney, AT&T, and Apple all have plans to launch their own services, and existing streaming competitors are going to push harder for space in the market. The end result will be more innovations and more data on streaming customers, which Netflix can use to come up with newer ideas. Accordingly, you can expect even more surprising innovations–from Netflix as well as its main competitors.

For Better or for Worse?

It’s hard to say for sure whether these changes will be for the better or for the worse, though it seems undeniable that Netflix will keep making new series America loves. With more than 139 million subscribers worldwide, Netflix would have to make some massive mistakes, and take damage to its reputation to lose substantial ground. Pay close attention to the moves Netflix makes from here on out, and be ready to adjust your subscriptions accordingly.