Home
Movies
How The Mummy: Tomb Of The Dragon Emperor Killed The Franchise 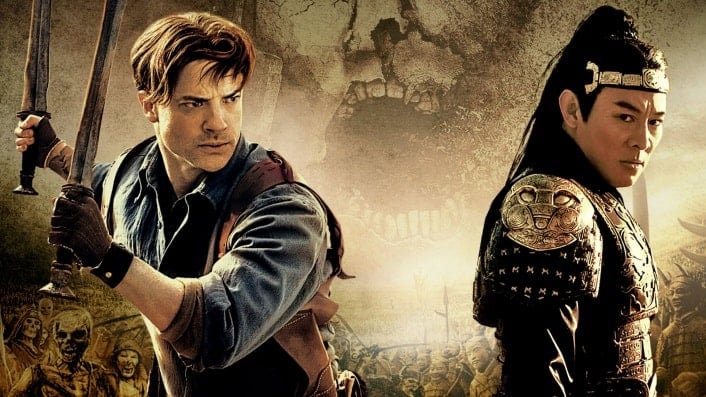 In 1999, Stephen Sommers re-introduced audiences into the world of The Mummy. A remake of the 1932 classic, the updated version saw Rick O’Connell stumble upon an ancient tomb that set loose a 3,000-year-old Mummy. Filled with vengeance and rage, the reincarnated Egyptian priest wreaks havoc on a world that wanted him dead. The Brendan Fraser vehicle was a roaring success in the mainstream, garnering $416.4 million worldwide.

The surprise blockbuster had just the right amount of action, suspense, and thrills that excited audiences. A sequel, The Mummy Returns, had more of a mixed reaction from critics this time around; however, the film still made a huge $435 million worldwide at the box office. Then, the series took a lengthy break. The third installment made its way into theaters in 2008 and was met with dismal reviews and only returned with $403.40 worldwide. Based on a reported production budget of $145 million, those returns were surely disappointing.

Eventually, The Mummy franchise was rebooted in 2017 with Tom Cruise as the leading man in the blockbuster film. The remake was supposed to kick off Universal’s Dark Universe (akin to Marvel Cinematic Universe), with the studio already hiring Johnny Depp (The Invisible Man), Javier Bardem (Frankenstein), and Angelina Jolie (as the Bride of Frankenstein). The film ended up bombing in theaters as well, amassing only $410 million worldwide off a production budget of nearly $200 million. Universal Studios reportedly lost nearly $100 million.

That effectively killed the start of The Dark Universe and the future of the once-popular franchise currently remains unknown. So, what happened? Did The Mummy: Tomb of the Dragon Emperor help kill the franchise? Let’s dig deeper into the theories on how this once popular franchise fizzled out.

The Movie Failed To Evolve

Sorry, but releasing one vengeful mummy is enough. There wasn’t much difference between Tomb of the Dragon Emperor and the first two installments. Someone releases a mummy, the crazed monster wreaks havoc, the heroes almost die (but don’t), and successfully capture and/or kill said Mummy. As cool as it was to see Jet Li represent the Mummy this time, there really wasn’t anything special about him in Tomb of the Dragon Emperor. The story wasn’t an exact carbon copy of the previous installments, but the beats were pretty much the same.

The exact same thing can be said about The Mummy reboot in 2017. Instead of going in a true horror route, Universal aimed for the action template that made the Brendan Fraser films so popular. Neither film had anything new to offer and the return of Brendan Fraser in Tomb of the Dragon Emperor wasn’t enough.

Couple that with the fact that Alex was a womanizing douche (a far cry from his young self in The Mummy Returns) and the film was a turn-off by many. The movie stayed in the $400 million ballpark because the premise didn’t offer anything new for moviegoers who didn’t care for the previous two installments. Of course, the horrible 12% rotten tomatoes score didn’t do anything to sway audiences either.

Tomb Of The Dragon Emperor Felt Like A Cash Grab

Despite a ten-year layoff, the Mummy 3 felt like a rush job. The CGI was mostly shoddy (though not as bad as The Rock’s Scorpion King in The Mummy Returns), the story was too simple (and not in a compelling way), and the movie fails to connect on a level that the previous two did. The Mummy and The Mummy Returns are far from perfect movies; however, those were fun action flicks that had great characters, solid storytelling, with great effects (except the Scorpion King).

The franchise fatigue hit Tomb of the Dragon Emperor because audiences were smart enough to see right through the action vehicle. Sure, The Mummy 3 did return a modest profit, but the utter laziness that the film displayed likely turned off audiences. With Universal trying to cash in on the Marvel universe craze, it was obvious that the 2017 reboot was treading on the same water as Tomb of The Dragon Emperor.

The Movie Was Five Years Too Late

Honestly, there was just no need for a third movie. However, I covered the reasons why above, so there’s no point in repeating those statements here. The Mummy movies were a fun product that came out in the late 90s/early 2000s; however, it felt like time had passed it by while watching Tomb of The Dragon Emperor. While it’s not impossible to remake another Mummy movie in modern times, Universal would be wise to stay away from the action templates of the earlier films. That way, the franchise would feel exciting and new while the company still cashes in on one of their oldest properties.