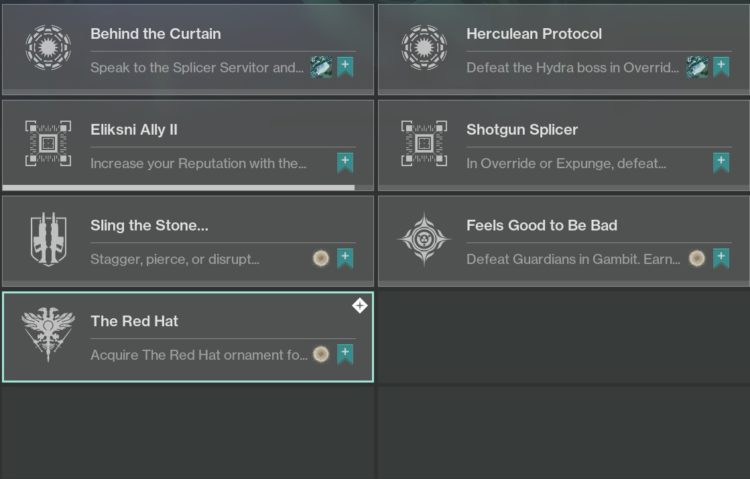 It looks like we’re finally starting to wrap up our Season of the Splicer challenges in Destiny 2, as Bungie is starting to give us fewer challenges to complete each week. This may be good news to some that don’t want to put in as much work every week, but it’s a sad time for players who want something to continuously grind for every week. While this is an inevitable point in the season, I’m still kind of bummed out that Bungie didn’t give us ten challenges each week for every season, so I’m hoping that this will end up being changed in later seasons. So, how can you go about getting your hands on some cool new rewards, seasonal XP, and other sweet loot? Find out how to complete the challenges for Season of the Splicer week 6 in Destiny 2 right here!

In order to complete the Behind the Curtain challenge in Destiny 2, you’ll need to speak to the Splicer Servitor and complete Path of the Splicer VI, and defeat Champions anywhere in the system. You can also get bonus progress for Champions defeated within Override or Expunge. This is a pretty big week for Destiny 2 lore, so you will definitely not want to miss out on this week’s Path of the Splicer mission! Completing this challenge will reward you with x2 Extra Large XP and 150 Decrypted Data.

Completing the Eliksni Ally II challenge will require you to increase your reputation with the Splicer Servitor in the H.E.L.M. a total of 20 times. If you’ve been playing quite a bit of the seasonal content in Season of the Splicer, you should be nearly there, but if not then you have a lot of work to do! Completing the Eliksni Ally II challenge will reward you with x2 Extra Large XP for your Season of the Splicer Season Pass.

In order to complete the “Sling the Stone…” challenge in Destiny 2, you’ll need to stagger, pierce, or disrupt a total of 50 Champions anywhere you can find them in the game. My suggestion would be to just kill two birds with one stone and get this challenge done in Override and Expunge missions, since it will be much easier and will guarantee you quite a decent amount of Champions per activity completion. Completing this seasonal challenge will reward you with a staggering (get it!?) x8 Extra Large XP and some Bright Dust to spend however you may choose in the Eververse store. I highly suggest buying those highly sought after seasonal outfit pieces or Exotic ornaments as those only come around every once in a while.

In order to complete this challenge, you’ll need to acquire The Red Hat ornament for the seasonal Fusion Rifle, Null Composure. This is the Crucible ornament, so once you grab the quest from Lord Shaxx and complete the objectives required, you’ll automatically finish this seasonal challenge. Completing this challenge will grant you x4 seasonal XP.

In order to complete the Herculean Protocol challenge in Destiny 2, you’ll need to defeat the Hydra boss in Override, and defeat powerful Vex anywhere in the system (bonus progress is added for Vex defeated in Override). Since Override is mostly a Vex activity, you’re probably better off trying to complete this challenge in there, but it’s up to you. Completing this challenge will grant you with x2 Extra Large XP, 150 Decrypted Data, and a piece of lore from “Achilles Weaves a Cocoon.”

Completing the Shotgun Splicer challenge requires you to defeat 150 combatants with Shotguns in Override or Expunge, but if you rapidly defeat them then you will earn bonus progress and have to defeat fewer enemies. Completing this challenge will reward you with x2 Extra Large XP.

Feels Good to Be Bad

Finally, we’ve got the “Feels Good to Be Bad” challenge. In order to complete this Destiny 2 challenge, you’ll need to defeat a total of 40 Guardians in Gambit. This sounds like a lot – and it is – but you’ll earn bonus progress for defeating them as an Invader, so you best put on your best Guardian slaying weapons and head onto the battlefield. Completing this challenge will reward you with x8 Extra Large XP and some Bright Dust to spend in the Eververse store.

There’s your week 6 Season of the Splicer challenges in Destiny 2! Surprisingly, these aren’t terribly difficult except for maybe the Gambit one – typical. Good luck on your path to completing all of your seasonal challenges, Guardians.