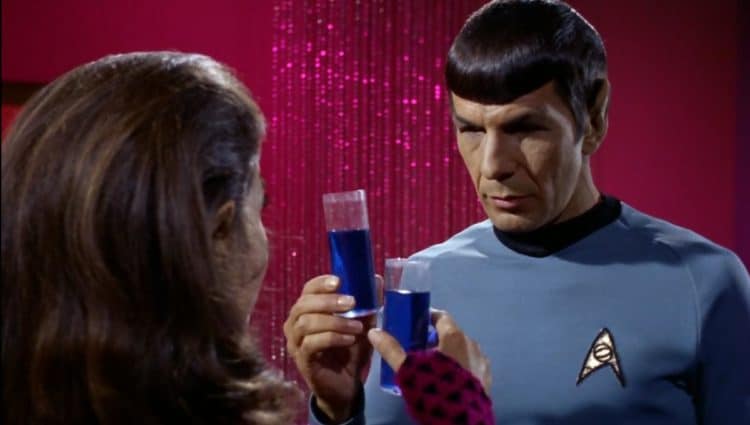 Romulan ale is to Star Trek as whiskey is to a western really since the two tend to show up quite a bit and are seen as commonplace in their respective productions. What’s funny is that a lot of people see the word ‘ale’ and start to wonder what the big deal is since a lot of us can drink a pint or three of ale and be just fine. In the movies however the blue-colored ale seems to have the same kind of punch as full-strength absinthe since it’s seen to be strong and quite capable of making a person drunk within one glass. Technically you’re not inebriated after one drink, but some people can feel the effects more than others due to lower tolerance or other various factors. Alcohol hits everyone different, but that’s just how human biology works. With Romulan ale though it seems as though one drink is bound to put a lot of people on their lips.

This guy might be a decent bartender but there are times when he might seem a little corny instead of all that funny, but it’s charming and amusing for those that like this sense of humor. The drink itself seems like something you might find at just about any bar since its ingredients are pretty common, being made of simple syrup, lime juice, Blue Curacao, and rum. That’s a pretty basic drink and it’s even kind of dangerous since the sweetness can creep up on a person by masking the taste of the alcohol that some people simply can’t take. The Blue Caracao is of course the reason for the color, but the kick is going to come from the rum, and how much one adds to the drink. Making a pitcher of this drink is bound to be kind of popular with people thanks to the sweetness and the ability to drink it without needing to pause and absorb the heavy punch of alcohol that could possibly make it unpalatable.

If you get through the length of this video you’ll get to see a couple of different ways to make this drink, the alcoholic and non-alcoholic since you’ve got to remember that kids love to emulate adults and not every adult is really into alcohol. That being the case both versions seem pretty sweet and are bound to have a lot of people running for their toothbrushes the next day thanks to the amount of sugar that is found in each one. With that having been said though this is a nice drink to make during the summer months and even a decent one to have during the colder months, but perhaps with a bit more rum to warm the belly and stoke the inner fire of those that happen to like a good buzz to take the chill off. There have been plenty of drinks that have been introduced on Star Trek throughout the years but for whatever reason Romulan ale has been at the top of the list for a long time for a few different reasons.

For one it’s almost always seen being imbibed by officers or those with a great deal of authority. This could be because it’s considered contraband and is therefore not legal. That kind of raises a few ethical concerns since this makes it clear that some Starfleet officers don’t really care to be as by the book as they claim and will bend the rules and possibly break them a time or two in order to get their favorite drink simply for the pleasure of it. That might not seem all that bad to many people and it probably shouldn’t be, but all in all it does seem to raise some ethical concerns here and there. Then there’s the idea that it simply gets you drunk and the taste is a subjective idea since if you look at the reaction on Captain Kirk’s face in Star Trek II: The Wrath of Khan, you’ll notice that it’s not exactly pleasure but it’s not outright disgust either that he reacts with. Plus, it’s Bones that procures the liquor and as a doctor this definitely raises some concerns since ‘medicinal use’ is a highly subjective term and has been for some time.

Then there’s the idea that to Romulan’s it’s not really a big deal. Apparently within the Star Trek universe the Romulan’s only seem to use this ale sparingly and for special occasions, while those in Starfleet, as we’ve seen anyway, seem to consider it a prize and something to use as a bit of prestige. There are of course drinks within the real world that are given this level of prestige as well, though when all is said and done alcohol is alcohol no matter how fine or refined it is. If you want to get your drunk on you’re going to find what does the trick.