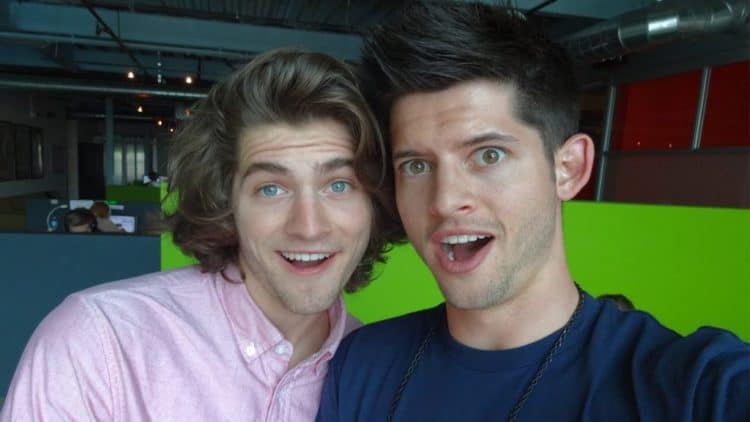 Hunter March is best-know as the host of the Netflix cooking show, Sugar Rush and as the host of Emogenius on The Game Show Network. Hunter’s rise to fame is a prime example of what can happen in the digital age. Thanks to social media, a great sense of humor, and his natural ability to entertain people, Hunter has been able to make a career for himself. Over the last ten years, he has proven that the possibilities are endless, and his greatest accomplishments are yet to come. Continue reading to learn 10 things you didn’t know about Hunter March.

1. His Grandfather Was A Famous Actor And Comedian

Entertaining people and being a game show host is something that runs in Hunter March’s blood. His grandfather was Hal March, a well-known comedian and actor who was popular during the 40s, 50s, and 60s. Hal was best-known as the host ofÂ  popular gameshow called The $64,000 Question. Sadly, Hal passed away in 1970 when he was just 49-years-old.

In 2017, Hunter March published a book titled TBH.Â The book focuses on self help and features stories from 24 social media influencers. Some of the people included in the book include Rebecca Black, Jenn McAllister, and Alex Aino. For every book sold, the book’s publishing company, Scholastic, donates a copy to the Pajama Program.

Most people are probably most familiar with Hunter March for his work as a TV host. However, long before he made it to the TV screen, he was doing his thing on the Internet. Hunter joined YouTube back in 2010 and grew his following to over 370,000 subscribers. He hasn’t posted a video in about two years, but his subscribers are still enjoying his old content.

4. He Joined Awesomeness TV As An Intern

5. He Wants A Star On The Hollywood Walk Of Fame

Earning a star on the Hollywood Walk of Fame is a noteworthy accomplishment for anyone in the entertainment industry. It’s a goal that Hunter March hopes to achieve one day. On his personal website, he shares that he hopes that his star will be next to his grandfather’s.

6. He Used To Do Spoken Word Poetry

Hunter March may not strike you as the poetic type, but he definitely knows how to write a good poem. In a video on his YouTube channel, Hunter revealed that he used to be really into slam poetry. Although he loved performing his poems, he eventually fell out of touch with the hobby due to other commitments.

7. He Performed A Rap For Francia Raisa

In that same video, Hunter March shared that he once got the chance to perform a rap for actress, Francia Raisa, in front of her and a group of his classmates. Raise is best known for roles on The Secret Life of an American Teenager and Grown-ish. Although most people would have been too nervous to perform in front of a celebrity, Hunter didn’t let stage fright get the best of him.

Hunter March has enough charisma and charm to win over almost anyone. So, it doesn’t come as much of a surprise that he was well-liked in high school. Although he claims that he wasn’t one of the cool kids, he was cool enough to be voted prom king by his peers.

9. He Wants To Be Featured On A Drake Song

Hunter March is a huge Drake fan (who isn’t these days?), but Hunter’s love for Drake is on another level. One of Hunter’s goals is to actually be featured on a Drake song. Although Hunter probably isn’t on Drake’s list of people to do features with, stranger things have definitely happened.

In the YouTube video I mentioned earlier, Hunter March confessed that he has two fake teeth. He didn’t go into detail about which two teeth they were. Since it’s impossible to spot the fakes by looking at his teeth, I thin it’s safe to say his dentist did a good job.