Home
Movies
Are We Ever Going to See an “Independence Day 3?”
Prev Article Next Article 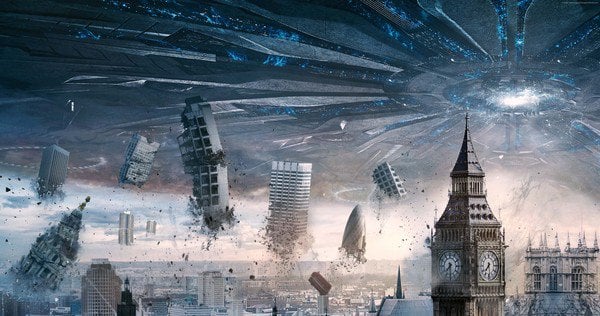 You can pretty much put any ideas of seeing an Independence Day 3 right out of your head at this point. What was supposed to be a chance to revive the movie “franchise” and create something that people would be able to cheer for with the sequel turned into something that united fans and critics for a brief moment, something that rarely happens unless it’s a movie that gripping or that terrible. From the trailers the second movie was supposed to be completely awesome, something that would blow us all away and create a burgeoning trilogy that would be remembered throughout filmdom for a very long time. Well, it might still be remembered, but it will be more likely that people will remember the first movie and groan when they think about the second one. After watching the trailer check out a few reasons why this might be. It looked awesome right? The problem is that the trailer showed us the best parts. Here are a few other reasons why it was kind of a flop.

There wasn’t much character buildup.

We were allowed to know that there was a problem between two of the main characters but we never got a lot of development to go with it. At least in the first movie the two top pilots that were focused on, Will Smith and Harry Connick Jr., had a very tight story that didn’t have to be explained but was still fully understood. Plus the former president’s daughter is still there but hasn’t had a lot of development. Will Smith’s character died and it was kind of brushed off, Jeff Goldblum’s character, as important as he was, didn’t get enough attention and just kind of glided through. Even Judd Hirsch, who helped make the first movie great, was kind of danced around for talent that was proven in other areas but still had yet to be proven in this movie. In short, it felt like a rush job that didn’t explore the ethos of the first movie in great enough detail.

It’s the same movie but with different effects.

The first movie didn’t have the budget this one did, that’s for sure. But it made do with what it had even if critics weren’t that happy with it. A lot more fans enjoyed the first movie simply because it was new and was something that made humans finally stand together in a way that made sense considering that they were fighting for the continuation of the species and not just one race, nationality, creed, or anything else. It was an epic-level Us vs. Them with the aliens being a ruthless antagonist that had to be stopped if humanity was to survive. In the second movie it’s much the same really but the effects have increased and the enemy is even more ruthless than they were in the first movie. Other than that it’s the same thing for the most part, save for the fact that humanity is supposed to be better prepared for a return. Obviously they weren’t, but it’s still just as hard to break the human spirit as it ever was.

The idea of the queen is something that seems way overblown.

So there are countless numbers of these vicious, marauding aliens that are like locusts trying to eradicate the indigenous species of the earth, and then there’s one massive queen that seems to control them all? That seems beyond the rationale of even this movie, which goes out on a limb to make things seem plausible at times. The enormous queen that’s the size of a small mountain being responsible for an entire race was kind of a letdown mostly because it turned this movie into less of a fight between one species and another than it was against another failed movie monster and her smaller offspring. In some ways it almost mirrors the failed attempt to bring Godzilla back to life back in 1998, along with his/her many offspring. Granted this is more hi-tech and a lot more inclusive on a worldwide scale, but it still seems similar.

In another 15 to 20 years it might be possible to take a look at these films and reboot them in order to make them create some kind of sense for nostalgia’s sake or just because someone wants to take a risk. By then a lot of us that remember the film might think it’s just a fond memory until it finally becomes something worth watching again. Seriously, this film had a lot when it came to special effects but almost nothing when it came to original story. It was good enough to watch once but until they decide on a way to recoup their losses and find an original thought the idea of an Independence Day 3 is best left where it is right now, tabled.