Home
Entertainment
Inside the Charity Work of 50 Cent 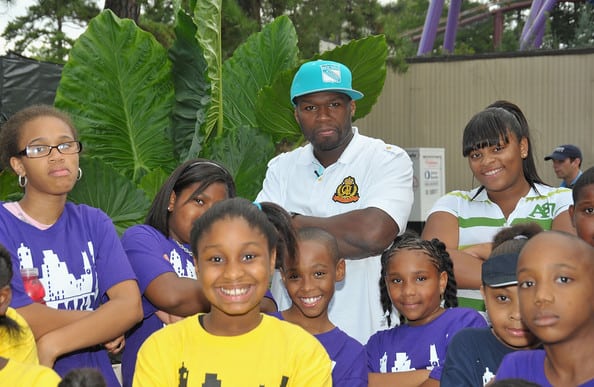 There have been just as many negative things to say about 50 Cent as there have been positive for a while but it would seem that if you dig a little deeper there’s a lot more positive stuff that you might have missed. It’s true that he’s had some financial issues, as Annabel Murphy of The Sun wrote he had to sell the home he’d bought from Mike Tyson for a whopping loss. But thankfully a good part of that sale if not all of it went to charity, so as many woes as he might have in the financial department he’s still doing something positive with the money. The charities he’s been into the heaviest, as recorded by Look To The Stars, include G-Unity Foundation, New York Restoration Project, Shriners Hospitals for Children, and a couple of others that he’s been donating to for a while.

His whole angle of ‘get rich or die tryin” was fitting for his early years since he used to be a drug dealer and made no bones about it. This was a way to get paid and to do for himself as he’s been heard to say. But what’s positive about his life despite the fact that he continued to have controversies that surrounded him for years after is that he’s turned a lot of it around and has been doing for others this whole time and making sure that the lives of those he’s trying to affect have been improved in some way. One thing that’s helped him to do this is the fact that he’s been a very successful businessman over the years as he’s taken to investing in a variety of different endeavors and has thus increased his net worth and managed to give back a good chunk of the money he makes to those in need. One such charity that he created, the G-Unity Foundation, has been lauded by many sources such as Capital Xtra, which has gone on to state just how much the charity means to him.

Too many people are quick to jump on the more negative aspects of a person these days and it’s been this way for a long time. It’s true that 50 Cent has done some questionable things throughout his life and he’s been made to pay for them a few times. But quite honestly seeing how he’s turned things around and started working with various charities to help those in need, particularly children that are disadvantage and in some cases starting out almost as he did, is a serious case of good karma that seems to have helped him out more than it’s hurt him thus far. A person can hold whatever opinion they want to about the guy but so far it’s been shown that he’s willing and ready to make a difference in some else’s life and is able to do this through both his money and his time. The inspiration this brings is something that’s an example to those growing up today since it’s going to be the coming generation that will eventually take the reins and have to live up the example that’s set, or make their own.

50 Cent’s career has been affected by his choices as well as if you look down the list of accomplishments he’s added to his resume you’ll see that he’s been about more than just the music as he’s been heavily involved in movies, TV, and even been a boxing promoter. This guy has been hustling for a while now and it shows since he hasn’t been idle all that long. It’s regrettable that he went bankrupt at one point but it obviously didn’t stop him since he’s still the same guy that a lot of folks fell in love with once he hit the music scene and he’s still the same guy that has more money than he knows what to do with. That seems to be the case when a person gets to be this famous, the money keeps rolling in and no matter what happens it takes a serious fall for anyone to go broke, though it does happen. Many famous individuals don’t tend to stay broke for very long if they’re motivated enough to get back up and make that fortune again.

With 50 Cent though it’s been seen that while he’s been knocked down in terms of monetary problems he’s still managed to get back up and has still thought about his charities on the regular since he hasn’t abandoned or let them down since he got involved. It would seem that a bankruptcy would make things a little harder to come back from, but so far he’s been doing just fine and has been keeping up with the more important aspects of his life. He’s definitely been an important person to many people at this point.